Home / About The Author

It sometimes helps to know who is authoring a website, what experience they have and where they are coming from and so in that light here is a brief insight into my relationship with this ‘Legendary Dartmoor’ website.

I was born in the small Cotswold town of Chipping Norton and then moved to the small village of Over Norton. I was first introduced to Dartmoor in the early 1980s. At that time I was working as a sales representative selling veterinary pharmaceuticals throughout the south west, this meant over-night stays in various hotels. Being a ‘country boy’ I soon found a couple of nice hotels on Dartmoor and would often take a stroll on the moor after dinner. In the late 1980s I moved to Devon and took up residence in the village of Denbury which is nestled just outside the Dartmoor National Park. I then moved to a small cottage just outside Chagford in 2000 where I spent many happy days, in 2002 I moved to Cardiff and then to a small village near the English/Welsh Border. So it is fair to say that I have known Dartmoor for a good forty years both as a resident and a visitor.

Like many people my real introduction to Dartmoor come via letterboxing through which I spent many happy days tramping all over Dartmoor. There are so many aspects to the landscape of Dartmoor that I soon wanted to know the history of what I was encountering on my various rambles. This thirst for knowledge soon saw a groaning bookcase filled with Dartmoor related works and when I was not walking the moor I was reading the many books and pouring over various maps. It did not take long for this interest to turn into a passion and in fact there are one or two people that would have described it as an obsession. Through my letterboxing activities I was approached by a local publisher who asked if I would like to write a book on the ancient stone crosses of Dartmoor. Having never ventured down such a route I saw this as a challenge and the year of 1996 was spent searching out the numerous crosses, photographing them and then drawing each one. In 1997 the book was finally published and, ‘A Pilgrimage to Dartmoor’s Crosses’ hit the bookshop shelves.

By then I had spent many years walking amongst the historical and archaeological features of Dartmoor and wherever possible reading about their origins. During these years I had also become a fan of Channel 4’s ‘Time Team’ which developed my interest in archaeology. Through a combination of Dartmoor and The Time Team I was inspired to embark on a distance learning course on archaeology at Exeter University. In 2003 this resulted in a certificate in archaeology which in turn inspired me to move on to a diploma course in Landscape Archaeology. By now my goal was to progress to a degree in the same subject but sadly the university stopped all distance learning courses in archaeology and that effectively put a stop to my ambitions, leaving me with just a certificate and diploma. However, after moving to Wales I discovered that the University of Wales was offering a part time Masters Degree course in Landscape History. I approached them and explained my predicament and despite having no degree was excepted on the course. In 2008 I graduated with a Masters Degree in Landscape History but sadly it has still left a gap on the wall where my ordinary degree should hang.

In 1997 I developed an interest in web building and decided to start a Dartmoor related site in the form of ‘Dartmoor, The Wildest Land’. This simply listed some of the better known legends of Dartmoor along with some letterboxing information and consisted of about 30 pages. As my knowledge of html etc was non existent I had to employ the services of a very expensive site designer who after taking the cash disappeared leaving me with a very basic site to which I had no access. In 2005 I decided to start again with a brand new site that would feature the history, archaeology, legends, folklore, traditions and landscape of Dartmoor. In order to have complete control of the site I bought Microsoft FrontPage along with a ‘bible’ which explained how to use the programme. In the October of 2005 ‘Legendary Dartmoor’ was born and since then has slowly evolved into what you see today with over 1,000 pages on the many aspects of Dartmoor. On average this website gets around 40,000 hits a month from all around the world. In 2016 I was persuaded to move over to WordPress which meant transferring over 1,000 pages which was a gigantic task. In the end a man in India offered to undertake the transition and so the site you see today was born. Sadly some of the pages were not faithfully reproduced hence some links and images may be missing, but slowly I am going through them and correcting any omissions. As add-ons to the site a Facebook page was started in 2011 which to date has 3,900 followers and in 2016 I began compiling a free newsletter which has now mutated into the quarterly Legendary Dartmoor Digest. In addition I now host  a Facebook group ‘Crossing on Dartmoor’ which is concerned with the ancient crosses of Dartmoor.

Since this website has been launched many of the pages have been used in various publications both of a local and national nature along with some of the graphics. I presume that initially through this website and via later discussions I got the opportunity to appear in a History Channel documentary which was filmed on Dartmoor in January 2009. More recently I have appeared in a BBC news item regarding Dartmoor skunks and regularly get contacted by various production companies for information or invitations to participate in their programmes. Over the past year or so I am increasingly being asked to publish new Dartmoor related book reviews, most of which can be found in the ‘Arts’ section of this website. Each year the Dartmoor Society make an annual award to; “to people who we believe have made special contributions to Dartmoor,” and in 2021: “we are also pleased to announce that Tim Sandles is the recipient of the 2021 Dartmoor Society Award for his outstanding website ‘Legendary Dartmoor’. Tim will also be our guest for the day and we are delighted to give formal recognition to this pioneering website that is rigorous in its research and always a really good read!” – an honour indeed! 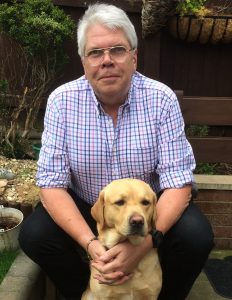 I hope this short resume has provided an insight as to where the information contained within these pages is coming from. I hope you enjoy your visit to Legendary Dartmoor.