Opposite Wistman’s Wood and amidst the Bronze Age features scattered nearby are the remains of a late nineteen century rabbit warren Hemery explains how the warren was established in 1895 as a sporting warren which covered around 330 acres. James Saltroun rented the land from the Duchy and installed his gamekeeper in a small warren house to watch over the rabbits. The warren only lasted a few years and by the early 1900’s the warren hut was in decay and the buries redundant. – pp.455–6. It may be worthwhile pointing out the difference between a ‘commercial’ warren such as Ditsworthy and a ‘sporting warren’ like Wistman’s Wood. Whilst a commercial warren bred rabbits for the market the smaller sporting warrens produced rabbits as the name suggests for ‘sport’ – shooting or hunting.
In Eden Phillpotts’ book of 1902 ‘The River’ the whole story is based around the warrener of Wistman’s Wood whose name in the tale was Nicholas Edegcombe. Phillpotts was renown for adding fact to fiction in all his works and in this book there are three descriptions relating to the warren. The first paints a picture of the warren house – “The man’s home stood a hundred yards distant upon the hillside. It was no more than a square hut of timber under a tar-pitched roof— a solitary spot in the wide desolation, from whose door neither companion roof-tree nor the least evidence of human activity was visible. Three miles of heath and bog, wild hillside and green morass separated Edgecombe from his kind, and his days, perhaps as lonely as any lived in England, passed here at the midst of a great rabbit warren.” – p.6.
The second describes that landscape of the warren – “They climbed eastward to the great ridges of the land, and here, immediately beneath them, cast in a semicircle upon the hill-side, extended an amphitheatre of stones piled and tumbled together in utmost confusion, stuffed with turf and heather, hidden under fern, opening into miniature green valleys, hillocked with grass and bilberry and wild thyme, where appeared little uplifted pulpits for the elders of the furred people. The harmonious mass of the warren was riddled with holes and tunnels, secret nurseries and homes. A dozen scuts twinkled white, a dozen brown shapes vanished to safety as the man and boy arrived above this great metropolis of coneys.” – p. 16.
Finally there is an account of how the warrener made his snares – “He was perched beside a spreading bough, and therefrom, by bright threads, depended a zinc bucket. Within it lay a flat-iron, and from time to time the man set pail and weight spinning freely, then he loosed the utensil, examined those bright threads from which it hung and flung them with a shining pile at his elbow. Thus he continued to spin in metal, for each object contained fourteen strands of copper wire, and each, when finished, was a deadly little noose, bright as red gold, pliant as whip-cord. Edgecombe thus spun rabbit-snares, for the man was a warrener, and he dwelt here alone in the theatre of his occupation.” – p.5.
The big question is – how much of these extracts are correct and how much fiction. There are several facts that confirm Phillpotts had visited the warren whilst it was still working and therefore the details in these extracts are eye witness accounts. Firstly it was confirmed by Kenneth day when in a conversation with Phillpotts the author stated that he had: “had found a new friend in once Nicholas Edgecombe, a warrener, who dwelt in a house… at Wistman’s Warren.” – p.83. Secondly, in the first edition of ‘The River’ the frontspeice is a photograph of the actual warren house as can be seen below. Finally the various descriptions of the landscape around the warren can only be written by someone who has actually stood within it. If you would like a free copy of ‘The River’  in pdf format it can be downloaded directly from ‘The Internet Archive.

Over the years today’s landscape of the warren has been the subject of at least two field investigations carried out by investigators from the old RCHME. It was concluded that there was evidence of 22 pillow mounds, known locally as buries or burrows, centred around Ordnance Survey grid reference SX 613 773. They are rectangular in shape with either straight or rounded ends, are flat topped with short sharp sides and shallow drainage ditches.  Most of the buries were orientated in a ENE to WSW direction and were of three distinct builds. Type 1  were to be found dispersed between Longaford Tor, the old warreners house and the West Dart river.  Many were constructed from earth and stone and averaged measurements of 14.3 metres long by 5.4 metres wide with a height of around 0.8 metres.  All had wide shallow drainage ditches which encompassed all but the downhill ends.
The second kind of buries consisted of a linear grouping which ran in a North to South direction and again centred around OS grid reference SX 613 773. This grouping consisted of somewhat smaller buries and averaged 11.35 metres long, 3.25 metres wide and 0.6 metres tall. The construction method here being different as they were constructed in the main from earth with shallower ditches only built on the long axis of the mounds. Some have signs that sometimes there was a central gully running down the length of the mound.
The final form consisted of 2 huge buries located on the west side of Littaford Tor one being 54 metres long and the other 107 metres long., varying between 2.5 and 3 metres wide and around 0.7 metres high. Again being built from earth and stone but in both cases the stones and natural boulders were much larger that those used in the first two types. Originally these two buries were interpreted as being military installations. The largest of these can plainly be identified on Google Earth from an eye altitude of 1.54 kilometres as can be seen below. Although difficult to identify amongst the many rocks, boulders, prehistoric hut circles, sheep tracks etc quite of few of the other buries can also be found on the aerial images. Although not accessible online a map of the warren was produced by the RCHME in 1989 field investigation.
It has been noted that the first keeper of the warren was James Rooke and he and his wife lived in what was described as a, “warm little shack”. Tradition has it that Rooke had a huge tame hare which could often be seen around the warren.  Hemery suggests that the Nicholas Edgecombe in ‘The River’ was based on James Rooke. However, Kavanagh, contends that it was her grandfather, Francis Billing who was the true inspiration for Phillpotts and was the warrener at Wistman’s. She notes how a document in the Duchy records states: “Rooke not allowed a gun licence – not a gentleman”. – pp. 24–5.  This could possibly infer that for some reason Rooke left the warren and Billing took over his responsibilities. According to Kavanagh, the 1901 census returns showed a Frank Billing living at Longford and listed him as being a ‘rabbit trapper’, it would only take a missing ‘a’ from Longford to arrive at the warren’s location of ‘Longaford’.  Eventually Kenneth Day, a close friend of Eden Phillpotts confirmed that indeed it was Frank Billing who the author based his character on. Therefore in the short life of the warren it could be averred that there were two warreners – Rooke and Billing?
The remains of the actual warren house are located at Ordnance Survey grid reference SX 6116 7779 and according to the Pastscape Record is situated in a spot that was associated with a prehistoric settlement. There are four main features connected with the site, the first being an oblong, turf covered platform with dimensions of 12.6 metres long by 3.7 metres wide and 0.4 metres tall. It has been levelled into the natural slope along the contour line. The second feature is a hardly discernible small rectangular feature whose dimensions are 6 metres by 3 metres, again cut into the slope and sitting on a terraced platform. The third feature consists of what would have been a walled yard measuring 7.6 metres by 5.4 metres the actual walls are around 0.4 metres high with a base of 1.2 metres wide and tapering up to 0.6 metres. It is suggested that possibly this was where the rabbits were butchered ready for sale. The last feature is somewhat of a puzzle and consists of a pillow mound located near to the house. It’s dimensions are 7 metres in length, 2.5 metres in width and 0.7 metres tall, the linear mound is flat topped with a central channel running down the centre. It is unusual to have a pillow mound sited so near the main warren house and possibly thought to pre-dates the house? Alternatively it may have been put there to provide a nearby source of rabbit for either the warreners own consumption or for when a supply of rabbits was urgently needed?
If ever you visit Wistman’s Wood and marvel at it’s splendour keep an eye out for the unmistakable vestiges of the old rabbit warren, you will find the burries scattered all over the hillside opposite the wood. Take to opportunity of walking a bit further past the woods and find the ruins of the warrener’s house. You may even spot the odd descendant of the denizens of the warren still scampering among the many rocks and boulders. 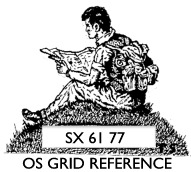