“Scarce hoarier seems the ancient Wood
Whose shivered trunks of age declare
What scath of tempests they have stood
In the rock’s crevice rooted there;
Yet still young foliage, fresh and fair,
Springs forth each mossy bough to dress,
And bid e’en Dartmoor’s valleys share
A Forest-wilderness“.
Sophie Dixon -1829.

PLEASE NOTE: DURING 2020/21 THE NUMBER OF PEOPLE VISITING WISTMAN’S WOOD HAS INCREASED DRAMATICALLY AND IN SOME CASES IRREPAIRABLE DAMAGE HAS BEEN DONE TO THE WOOD AND ITS FLORA. THE WOOD IS BUT ONE OF VERY FEW EXAMPLES OF AN ANCIENT OAK GROVE AND SHOULD BE RESPECTED AS SUCH. PLEASE THINK TWICE ABOUT ENTERING IT AND THE DAMAGE YOU MAY CAUSE – THANK YOU!

Nestled on the eastern slopes of the West Dart river stands a wood of dwarf oak trees. Once you walk into the tangled web of trees you are transported into a mystical world of moss carpeted boulders, lichens of all descript, finger like oak branches, all engulfed in a wonderful smell of earth and age. For millennia this small, mystical, stunted woodland has been held in awe and for many fear. Tales of Druids, ghosts, the Devil and a host of other supernatural creatures abound, some dating back to the long lost ages before man could write. Many writers have described the wood as being “the most haunted place on Dartmoor”, others warn that every rocky crevice is filled with writhing adders who spawn their young amidst the moss and leaf strewn tree roots. Locals will never venture near once the sun begins it slow descent over the nearby granite outcrops for it is when the dark mantle of night draws tight that the heinous denizens of the wood stalk the moor in search of their human victims. So be afraid, very afraid, as the wagging finger of fate warns you to stay clear and risk not your mortal soul in the ‘Wood of the Wisemen’.
Legend has it that Wistman’s Wood was a sacred grove of the Druid’s and it was here that they held there pagan rituals. The huge boulder in the title picture above has become known as ‘The Druid’s Stone’, otherwise called the ‘Buller Stone’. The wood is also said to be the kennels where the diabolical ‘Wisht Hounds‘ are kept. These are a pack of fearful hell hounds who hunt across the moors at night in search of lost souls and unwary traveller’s. It is said that they are huge black dogs with blood red eyes, huge yellow fangs and an insatiable hunger for human flesh and souls. It depends on what part of the moor you meet them but they are either led by the Devil or occasionally by the ancient spirit of Dartmoor known as ‘Old Crockern‘ who lives nearby on Crockern tor. There have been reports from travellers that on dark, misty nights the hounds can be heard howling and baying for blood. The wood is also said to be home to ‘hosts’ of adders who writhe and slither amongst the velvet moss covered boulders, their bites are apparently more venomous that any other adder on Dartmoor. Sometimes the small ghost of a dog called ‘Jumbo’ can be seen scurrying around the rocks and boulders in search of rabbits. At nights, the plaintive cries of the little terrier can be heard echoing down through the valley below. History has it that the poor dog died in the wood, from what nobody is sure but there is a strong possibility that it was from an adder bite. Some people say that the small oak trees never produce acorns but on the other hand people also say that if you carry an acorn from the Druid’s Grove it will protect from rheumatism. Near to the northern edge of the wood is the ancient Lych Way or ‘Way of the Dead’. It was along this track that the corpses were carried for burial at Lydford. There have been reports of a ghostly procession of monastic looking men dressed in white habits slowly walking by the oak wood in sombre silence.
For centuries Wistman’s Wood has been the inspiration for numerous artists and poets and a whole plethora of paintings, etchings and poems have been produced. The noted poet Carrington went into full flow when he penned the following drear lines:

How heavily
That old wood sleeps in the sunshine;- not a leaf
Is twinkling, not a wing is seen to move
Within it;- but, below, a mountain stream
Conflicting with the rocks, is ever heard,
Cheering the drowsy noon. The guardian Oaks,
My country, are thy boast – a giant race
And undegenerate still; but of this grove –
This pigmy grove, not one has climbed the air,
So emulously that its loftiest branch
May brush a traveller’s brow. The twisted roots
Have clasped, in search of nourishment, the rocks
And straggled wide, and pierced the stony soil:-
In vain, denied maternal succour, here
A dwarfish race has risen. Round the boughs,
Hoary and feeble, and around the trunks,
With grasp destructive, feeding on the life
That lingers yet, the ivy winds, and moss
Of growth enormous. E’en the dull vile weed
Has fixed itself upon the very crown
Of many an ancient oak; and thus, refused
By Nature kindly aid, – dishonour – old –
Dreary in aspect – silently decays
The Lonely Wood of Wistman!” 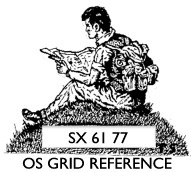