“The tradition of the ‘Wish Huntsman’ and his ‘Demon Dogs’ still lingers on Dartmoor, but in a very shadowy state. The Dewer Stone is regarded as the spot he chiefly favours, and report used to describe him as a swarthy individual who hunted at night, and then only when a storm was raging on the moor. His steed, like those that drew Lady Howard’s coach, was black, and his hounds were black also. What they hunted nobody has ever been able to say with certainty, but they appear to have been an extraordinary pack. Their quarry could have stood little chance, for if scent failed, then sight, in all probability, made up for it, since we learn that their eyes glowed like balls of fire and were as big as saucers.” – William Crossing, ‘Folklore and Legends of Dartmoor. pp. 53/4.

The ‘Wish’, ‘Wisht’, or ‘Yeth’ Hounds, call them what you wish have supposedly stalked the moors for centuries, maybe even millennia? There have been numerous firsthand accounts from unfortunate travellers who during their Dartmoor wanderings came face to fang with the demonic pack. Each and every story differs as to location, appearance and outcome of such a encounter. Firstly who in fact was the huntsman riding with the hounds? As can be seen above, William Crossing states rather vaguely that it was a “swarthy individual”, others affirm that it was the Devil himself whilst another opinion is that it is the guardian spirit of Dartmoor – ‘Old Crockern‘. But we must not forget the other two candidates, the evil  Squire Cabell who is said to lead the hounds on the anniversary of his death and even Sir Francis Drake who is said to run his pack from Buckland Abbey.
Next we come to the question of his mount, this fiercesome steed has been described as being black or as being a skeleton but another alternative is that the ‘Huntsman’ trawled the wastes of Dartmoor on foot.  There is an account of a man travelling down one of Dartmoor’s dark and lonely lanes when he came across the Devil, who cloaked in black was carrying a huge tree on his shoulder as a hunting stick. Behind him silently stalked the ‘Wisht Hounds’, their fiery eyes glowing ember-like in the darkness. Transfixed to the spot the unfortunate soul stood motionless as the demonic hunt passed by. On reaching the river Dart the hounds began baying and flames issued from their open mouths when suddenly both hunts,man and his pack simply evaporated into the darkness. One may ponder as to why their hunt should end so abruptly and with such a commotion? simply because for some unknown reason the hounds were too afraid to cross that particular river.
This then brings us onto the hounds themselves and virtually every description portrays the same picture, huge black dogs with fiery eyes the size of saucers and vicious yellow fangs somewhat akin to those of a tiger. Sadly there are no more definitive features as those that came that close never lived to tell the tale.
Location, location – again there are several theories, people have spotted them in Buckland Woods and Holne Chase but as mentioned above they dare not cross the River Dart. Other reports come from around the Wistman’s Wood area and the Abbot’s Way. The wood itself is regarded by popular consent as being their ‘kennel’ and the point from which their hunts begin although the Dewer Stone is another kennel contender. 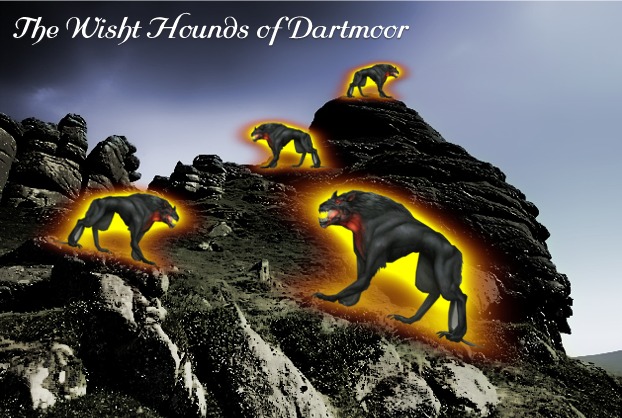 There’s no earthly point in having a hunting pack if there is no prey to hunt, so what on dark nights what do they search for? Early writers contend that the demonic pack stalk the moors looking for the unrest souls of Druidical sacrifices. This may not seem as outlandish as it first appears when the fact that early antiquarians firmly believed that many of the prehistoric ritual monuments were built by them for their rituals. Once a kill had been made the gory carcass would be returned to the master and he would then keep it in a sack which depending on how successful the hunt had been would then betaken back to the kennel and fed to the hounds. Additionally the ‘Wisht Hound Kennel’ at Wistman’s Wood is said to have been an ancient grove where the Druids practiced their rituals. It is said that every moral has a story and the tales of the ‘Wisht Hounds’ is no exception. In this case the ‘story’ is that the Master and his hounds seek unbaptised babies which when once found they would eagerly devour and deposit the bloody corpses at the parent’s feet. It was even thought that the hounds would snatch the babies from the very beds in which they slumbered. Unfortunately, Dartmoor being Dartmoor it was not always possible to get to a church once a child was born due to remoteness or during times of adverse weather conditions. So fervent was this belief that it was not unknown for parents would place a piece of consecrated bread under the infant’s pillow for divine protection until they could journey to the nearest church. So, the ‘moral’ of this ‘story’ is one which portrays the dire consequences of not having you child baptised. You could even go as far as to suggest it was one that the Christian church encouraged because it prayed on the ignorant superstitious fears of Dartmoor folk. There is one gruesome story of a moorman who met the ‘Dark Huntsman’ and his demonic hounds on dark night and actually got to see the contents of ‘that’ sack – you can read that story – HERE.
In this modern day and age such stories as these seem totally implausible to most folk, except, today there is a new and singular version of the ‘Wisht Hounds’ which is very plausible – that being ‘The Beast of Dartmoor‘. There have been numerous sightings, paw prints, and eerie noises that have been attributed to a large cat, namely a puma or panther. Granted these are not canine but are feline and I imagine if ever encountered would instil just as much, if not even more fear into men’s hearts.
One final point, many of the cases where folk have met the ‘Wisht Hounds’ and their master have been out on the moor and usually late at night as they returned home – from their local inn or hostelry. Not sure if there is any connection here?

There’s mystery in great grim tors
All silent in the sobbing rain.
Where in the shade of Windy Post
A Wisht hound’s baying to the moon.