Every now and then nature transforms Dartmoor into a spectacle of shimmering ice and frost which coats literally everything in a mantle of glistening ice crystals, on the moor this is known as ‘The Ammil’. This phenomenon occasionally occurs in other parts of the country but is normally regarded as particular to Dartmoor. The word ‘ammil’ is thought to derive from the old English ammel which means – enamel, which is exactly what the ice does it coats or enamels every projecting thing on the moor. Be it a blade of grass, a leaf, rock or a tree branch the ammil covers it all, turning the moor into a shimmering ‘ice age’. The ammil occurs when a winter thaw is suddenly arrested by a rapid drop in temperature which results in the moisture being frozen. Due to the warmer climate such events are now a rare thing and it must have been amazing to see the ammils of years gone by. Although a picturesque scene it was certainly no joy for the cattle, ponies and sheep which were out on the open moor. It was also no fun for those folk on the moor who relied upon their water supply from the various leats etc which froze up. I have found an account of such an event from 1924 and the wonders the author witnessed;

“Few people who have not had experiences of it can imagine how severe the weather of winter can be on the great upland of Dartmoor. In a hard period, such as now has prevailed for a week, the cold is of a searching, cruel nature, aggravated by high winds from the north and north-east, against which the customary windbreaks afford an ineffective protection.
Following upon a spell of broken, wet weather, the frost began on Tuesday night, a week ago. The wind, rising to half a gale, promised snow which did not come, with the result that the bare, exposed ground next morning was iron-hard to at least an inch below the surface.  Before sunrise a whitened world of hoar frost was what one looked out upon. And the nights since have been white, with the lights increased in effect by the beams of a cold moon at the full.
Everywhere the pools are frozen, the streamlets are frozen, and from the rocky ridges icicles of considerable length hung thickly together. The sun has increasing power, but in spite of that the frost holds all day long in northern situations. One calls to mind the old adage: ‘As the day lengthens, So the frost strengthens’. And that is generally the case whether or not we have snow at this period of the year. The slight sprinkling that has come soon disappeared from the lower and warmer ridges, but has remained at the tops of the tors and to their northern and western sides.
To those who are physically able to enjoy winter it has proved a time of great delight. One is greeted in the early morning by a world under a covering of white, while to the distant tor-bound, irregular horizon, so picturesque that the idea of an Alpine scene impinges upon the mind. Every twig and blade of grass carries its share of diamond-like particles, glistening in the sunshine. The backs of the wandering Scotch cattle, and those of the ponies indicate the severity of the conditions of the previous night. It is a hard time for those creatures as it is for all wild things, for there is little sustenance or relish in frozen herbage, and the grass is indeed scant at this time. So scan is it that as soon as the sun is up the ponies begin feeding into the roots of the gorse, digging with their fore-feet in search of tender roots and blades that have escaped the worst effects of the latest frosts. 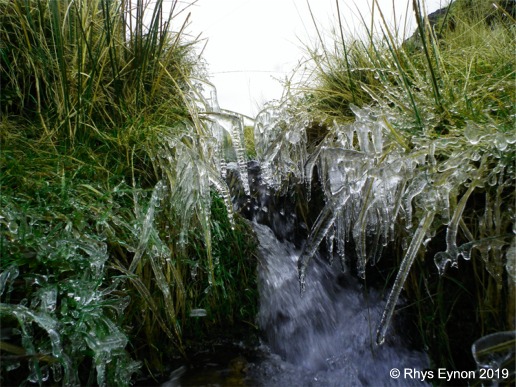 In traversing the moor at night, one comes upon clusters of cattle and groups of ponies huddled into the more sheltered situations. The little animals look out on a world all white over which shines the full-orbed silver moon. The effect of the scene, having regard to the situation, and the absence of one’s fellows, is uncanny, almost weird, and it requires but small imagination to conceive what lonely travellers away in the Arctic must experience at times. Yet one has only to look away in the direction of the highways to detect the glimmer of a speeding motor-car.
Still, the keeness of the frost notwithstanding, one does not feel the cold out-of-doors so long as one keeps moving. That is if there be no wind. But when the wind blows there is no getting away from it. And it can be cold. No creature cares to face a high wind on Dartmoor during a frost any more than man or beast likes to meet the raw blasts which come with the thaw. These winds pierce to the bone and marrow. The moorman may be able to withstand them; other folk are not so favourably placed. It is told that when the French prisoners of war had to leave the ever-crowded hulks of the Hamoaze, and were marched out to Prince’s town (as it was then called)  they exclaimed one to the other, as they breasted the hill beyond Dousland, and came in view of the bleak and barren upland, “This is Siberia.” Their impression was verified during the very first winter. Without adequate clothing, without necessary fuel, and with scant food, they suffered all the privations associated with prison life in Siberia.
The winter in the present case began in November, when we had two weeks of frost. What we are now experiencing is the second half. Some cheery old souls are not content that this spell should be the last for the season. They say, “You wait till March comes along. Do’ee know March can be the worstest month in the year on Dartymoor? ‘Tis often so.” What a long spell of dry summer weather does for Dartmoor, that, or nearly so, does a long frost – it makes the ‘going’ possible for the pedestrian, who can go dry-foot and with safety over great stretches he would not dare to attempt at other times and under the softer conditions of several months of the year.
This winter exploration of Dartmoor is less popular than it might be with townspeople. For the most part the great moor is left, during winter to the fox hunters. True, unless one is versed in Nature’s ways there is little to attract attention. But the same thing might be said of the heights of summer. A tramp across the moor – not over the highways crossing the moor – in the winter sunshine of a clear and frosty day is something to be enjoyed. It puts health and vigour into ones frame and helps to blow away the cobwebs of the weekday world. But one’s motto just now be “Carpe diem.” Delay is fatal.” – Western Evening Herald, February 25th, 1924.