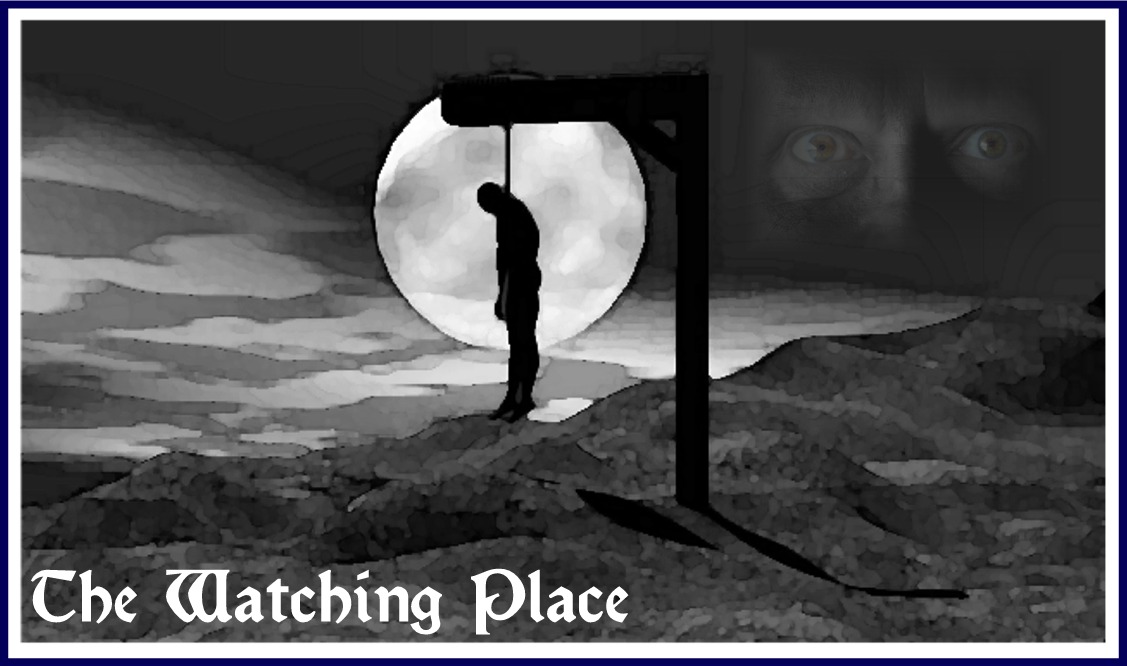 If you look at an Ordnance Survey map of Dartmoor you will see hundreds of cross names, e.g. Cold East Cross, Challacombe Cross etc. The cross element actually refers to a crossing of roads and not (in most cases) an actual cross. Beetor Cross is another example, although at this particular road junction there is an actual stone cross mounted on top of a wall. What you will not see on the Ordnance Survey map is the other name this particular place is known by – The Watching Place. As you can see from the map below it is located on the B3212 trans moor road that runs from Moretonhampstead to Yelverton. 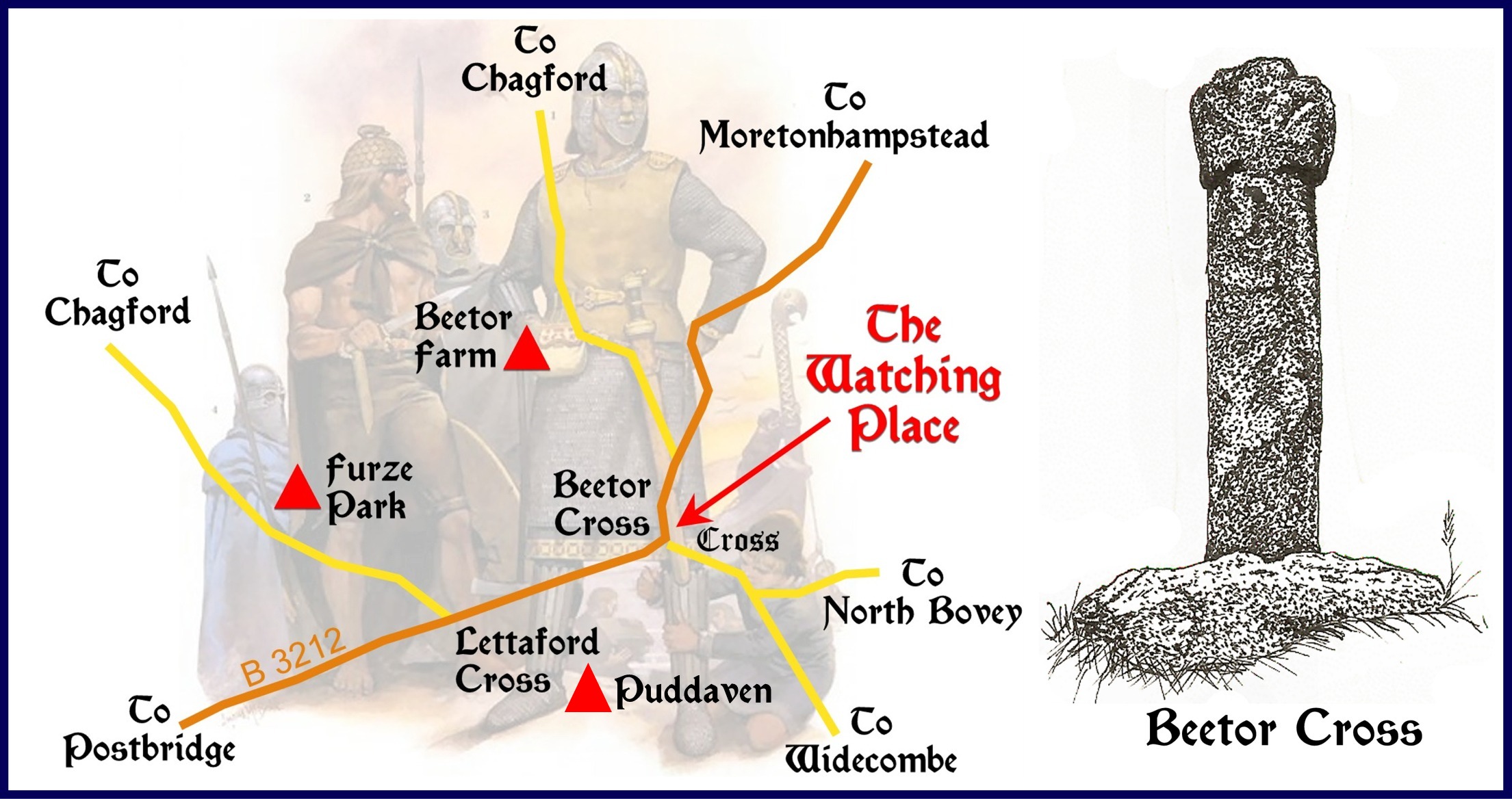 There are several notions why this location got the name ‘Watching Place’. The first being that it was the site where in Medieval times the local  Lord of the Manor erected his gallows and that any relatives or friends of the condemned person would watch and wait for the Lord’s permission to remove the corpse. It is also said that these particular gallows were to see the last hanging in the area.

Another tale as to the name dates back to the days of the bubonic plague. In 1626 the plaque was rampant across Dartmoor. It was thought to have been spread by sailors travelling between Plymouth and Barnstaple on ‘The Mariners Way’. This particular outbreak spread from Plymouth to Ashburton and then northwards to Okehampton. The plague spread to a nearby homestead called Puddaven. This was located near to Beetor Cross. Some of the inhabitants were struck down with the plague much to the fear and consternation of their neighbours. About 200 yards from the house was a slightly rounded flat slab of granite on which, every evening the neighbours would place provisions. Then the next day they would check and see if the food had been removed, if it had then fresh supplies would be left that coming evening. On the fifth morning the food was still on the slab and so the neighbours knew that the plague has struck down the last survivor. Some of the men approached the house and called out to the occupiers, there was no reply so they set fire to the thatch and burned the house down in the hope that the fire would cleanse away the plague. From that day onwards the place where the moorfolk left the food became known as The Watching Place. In the yard of the modern Puddaven is a small building that is said to have been built over the fated plague house. Also on top of a hedgerow is a large flat, circular boulder thought to have been the slab which the provisions were left on.

A differing story for the place name dates back to the Napoleonic Wars. During the conflict French and American prisoners were detained in what now is Dartmoor Prison. Some of the officers were allowed out on parole to live in the border towns or villages. One of the conditions of parole was that the men were not allowed to venture further than 1 mile from the extreme parts of the town. In some places these were specific parole stones and in others local landmarks such as The Watching Place. This may have marked the limit for any parolees living in Moretonhampstead and it was here that local bounty hunters would wait and watch because if any prisoner broke his agreement he was to be arrested and taken back in return for a reward. The only problem with this theory is that the cross is about 3 miles from Moretonhampstead and so would be way out of the 1 mile limit. There is a crossroads called Bugshead Cross which is two miles down the road from The Watching Place and that is virtually 1 mile from the town and would be a more likely candidate.

There is also an old tradition that the road from The Watching Place to Bugshead Cross (1.5 miles toward Moretonhampstead) used to be the haunt of a highwayman called John Fall whose speciality was leaping out at his victims from various hiding places.

With all this varied activity going on it is not surprising that there is a ghost who haunts the place, in this case its not an entire spectre but a hand that reaches out and grabs the bridles of passing horses. This normally results in the horse shying up and unseating its rider.

There is even a notion that there was once a battle between the invading Saxons and the local British warriors at this location. 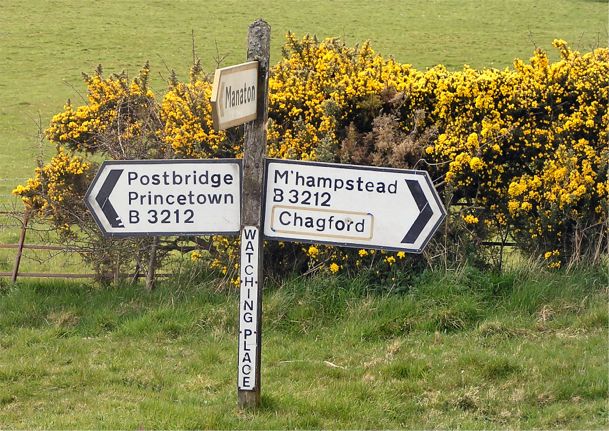