“Two Bridges is on the Dart, and is about the middle of this wild uncultivated district; a more dreary situation in winter cannot be imagined in the centre of so rich, populous, and cultivated a county as Devonshire; no wood is to be seen, and the little stock, an apology for a farm, around the inn, evinces the difficulty attendant on such an experiment” – T. H. Williams, 1827.

As can be gleaned from the above, at one time Two Bridges was not the most hospitable of places and sitting at around 340m winters were/are no fun. The first documented record of the place-name – Two Bridges was in 1573 when it appeared in a court roll as Tobrygge. This has been taken to mean ‘at the bridge’ as the word ‘to’ is a Devonshire term for ‘at’, as in where’s ee to? This then later became mutated to the word ‘two’, Glover et al. p.197. Originally this area would have been where an old trans-Dartmoor packhorse track crossed both the Cowsic and West Dart rivers, as can be seen from Donn’s map below. But these crossing points were not where the two bridges are located today they were further to the north and both would have been clapper bridges. Hemery, p.458, suggested that the clapper bridge pertaining to the place-name, Tobrygge was one now long gone and was situated between Crockern Farm and Cowsic Foot. In his opinion these two clappers would have been too far apart to be called ‘Two Bridges‘, hence returning the the original interpretation of the place-name. He also notes that a local moorman informed him that  this clapper was washed away sometime in the early 1800s?

The first bridge to appear at Two Bridges was one that carried the turnpike road across the West Dart just below the confluence with the Cowsic which tends to make sense, one crossing instead of two. The second bridge, known as the ‘Prince Edward Bridge’, began construction in 1931 and completed in 1932 superseded the old turnpike bridge, finally becoming Two Bridges.
The postcard below is dated around 1908 and clearly shows the old turnpike bridge before the new county bridge was constructed. You can see what appears to be gates hanging across the arches ? However the whole idea of these gates also known as spanions was to prevent livestock wandering between commons and newtakes, many thanks to Simon Butcher for pointing this out. A similar example of this can be seen at the Cherry Brook bridge.
The other entry of interest on Donn’s map is that of a ‘Potato Market’, this would have been an open-air market where potato growers from the Chagford and Moretonhampstead area brought their produce to be sold. The location of this venue could not have been better situated as it gave both producers and buyers access to a convenient convergence of roads, the market appears to have been at its peak around about 1770. 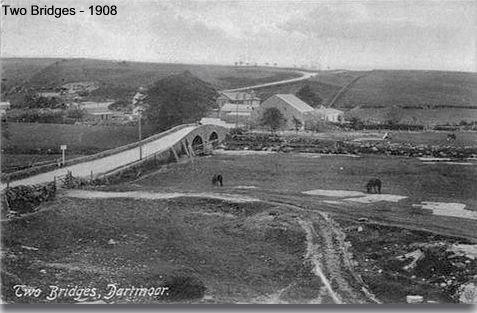 William Crossing mentions that a fair was regularly held at Two Bridges which was followed by a sports day. He recounts a visit when there were some Devon wrestling matches taking place a couple of days after the fair,1974, p.68. Gerrish, p.28 tells us that by 1822 the Two Bridges fair was held on the Wednesday following the 16th of August when cattle, sheep and horses were sold. As can be seen above, the Tithe Map and Apportionment for 1840 clearly shows the enclosure number 855 a which is called ‘Fair Park’. The fair day later moved to a Thursday early in August. In Owens’ publication – ‘Book of New Fairs’ which was published in 1816 there is no mention of the fair at Two Bridges so it may well be that it began shortly after then? Crossing in another book states that the Two Bridges fair was replaced by the one held at nearby Princetown but sadly he makes no mention of when, 1977, p.126. Not only was it travellers that would use the inn, the area is well know for its good fishing and hunting and so it became a popular centre for hunters and their dogs, horses etc. Hemery, p.459, records how at one time there was a blacksmith’s shop at the inn who serviced customers and any passing travellers whose horse/pony had thrown a shoe.
Back in the late 1980s I used to stay at the hotel quite a bit and I remember one very late winter’s night being awoken by a mad scratching and scrabbling noise coming from under the bed. The room was in complete darkness with a definite chill, I turned on the light and peered under the bed where a found the hotel cat. This explained the eerie noises and a quick glance over to the window explained the chill, the sash window had slipped open and the freezing moor air was wafting in. Around about the same time the hotel then had a small public bar and to this day I can still recall sitting in there and enjoying a pint or two after a day spent on the moor. It must have been about the same time when we once spent a disastrous New Year’s Day afternoon at the hotel, eating cream teas (as if that’s the very thing you need after all the Christmas feasting) and playing cards. The next occasion I had the pleasure of staying at the hotel was back in 2009 during some filming I did for the History Channel. The whole crew were in residence and supposedly the film company were picking up my tab. It was a most comfortable stay with good food, the only disappointment was that I thought ‘film stars?’ when on expenses were allowed a limitless bar tab – this one extended to two pints :(.  After three days of trucking the crew around Dartmoor the last night was payday. One by one each crew member went into a side room to collect their little brown envelopes. I was last to be summoned and was proudly presented with my wages – a baseball cap with the production company’s logo – “Oh thank you so much, I would really love to express my gratitude – but I won’t!” My most recent stay at the hotel was rather different as I enjoyed an evening meal in the company of William Crossing and his wife along with various other long departed Dartmoor celebrities – see HERE.