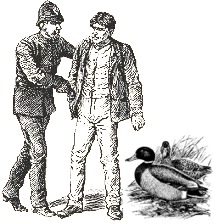 So just for the sake of two stolen ducks the eventual list of injuries was quite extensive. On that night Doctor Albert Dunning Hunt from Chagford treated both Mr. Brock and Mr. Rice for injuries sustained in a heavy club attack,  James Garrish for a stab wound to his finger and last not least P.C. Tucker for numerous injuries including the wounds caused by the fire shovel and chopper. The doctor stated at the time that if Tucker had not been wearing his helmet then his wounds would have proved fatal.
On the 22nd of January 1883 the three men were brought before the magistrates at the Moretonhampstead Petty Sessions. where they were charged with stealing two ducks from Mr. Brock and committing; “a most violent assault on P.C. Tucker.” Apparently P.C. Tucker appeared at the court with a livid black eye, several bruises and walking with a limp. The Dodd brothers also appeared battered and bruised and covered with strips of sticking plasters. On the magistrates table were exhibited the weapons with which P.C. Tucker was assaulted;  a heavy blood-stained bludgeon, an iron chopper and an iron bar which was seven pound in weight. The mystery of the missing ducks was also revealed during the hearing.  On entering Dodds’ house for the second time P.C. Tucker found that the duck’s wings and feather had been thrown onto the fire where they were burning. Also the entrails of the ducks had been hidden in George Dodds’ pocket and thrown into the street as he was being delivered to the police station. The day following the event portions of duck were found in a nearby meadow hidden under a bush. The outcome of the hearing was that the bench committed the prisoners for trail at the next court sessions.
At the court hearing a very weak case for the accused was put forward and the jury found the prisoners guilty as charged. The Judge then commented that this was not the prisoners first offence as there had been many convictions against them for assaults. He then went on to say that they had in this case been guilty of, “very ruffiantly conduct towards men who had acted with courage in nothing more than the exercise of their duty. To suppose that policemen were to stand by and be smashed about or murdered was ridiculous. They were getting in this country to a kind of sentimentality which strikes at the root of manliness. If it were not for policemen everybody would have to carry revolvers and fight for themselves, and the state of things would be a continuous warring against each other.” The final outcome being that all three were sent to penal servitude for a period of five years – all for the sake of two ducks?