Today if you wanted to travel from Torquay to Chagford it would take 59 minutes to travel the 26.8 miles by motor vehicle. Imagine for the same journey in 1899 you had to get a train at Torquay Station travelling to Newton Abbot then passing through Bovey Tracy and on to Moretonhampstead Station. Having reached there board a coach and horses to the final destination of Chagford. What a superb variety of Devonshire landscape you would slowly trundle through with time to watch and stare and observe the dramatic change from the salty coastal lands to the fresh and bracing air of the Moors. What follows is the experience of such a traveller back then…

Out again in the broad sunlight of the staring street, with the slow measured blows of the pick following us. These evidences of death here are not gloomy for the sun shines and the churchyard is decked with flowers, and the sleeping of those in the grassy beds seems to us of little duration. There is the grass which grows luxuriantly, and will be cut down in a little while, and yet again in the Spring will rejoice in a new life. Does it not teach hope for the morrow –  the one great lesson that all the perennial flowers teach us year by year. Shrill voices call from the lips of the living children. They play among the head pieces of the graves. The village is full of busy life, the things of life are calling very loudly to the businesses of the short day that must set and be curtained by the night of the churchyard. Our trap is here, we mount, we clang the door, we start at a round trot, clattering through the noisily cobbled streets of the village. Dogs bark and fly out in aggressive attack upon our moving wheels. The air is sun-permeated, hot, luscious. The tors are purpled with distance, and starred here and there with houses. And as we clatter we are pursued by the slow warning strokes of the gravedigger, making the last bed of someone unknown who has played his or her little part in this drama a village life, and has now slipped behind the great curtain that ends our play.
Down the hill we go more sedately for the declivity that set us in a sudden upon the delightful scene of Holy Street Mill is no more gentle falling away but some hill of steepness closured by high walls and banked hedges: up again cresting the opposing hill and jaunting it happily along with the happy drowsy contentment of noon far gone, catching here and there tall fox gloves, hanging purple bells, sweet breathed honeysuckle, coquetting butterflies, honest soberly industrious bees; seeing green meadows with fringes of trees, wheat and oats and barley growing to the harvest swaths of hay, not yet concreted into stacks, hay stacks newly built and giving to the air that nameless scent which is so penetrative and insidious. So we go with a loquacious driver, glad to familiarity to find that I know somewhat of old worthies of “Chaggyford,” telling of the death of this one, the departure of another, the great advancement of a third, and so on with easy garrulity of village life. Then we drop again, see the spread of a village fair at South Zeal, with men ambling round the fields on horses in the curiously toy-like atmosphere of distance, pass disused mines which have vomited out rubble that fall sin treacherously smooth banks to the roads through Sticklepath with its picturesque houses set at the rear of old world gardens and by a devious course, so avoiding the steepness of the way by Skaigh to the little village of Belstone which is to be our home for the next few days.” For this installment follow – HERE.- The Torquay Times, July 28th 1899. 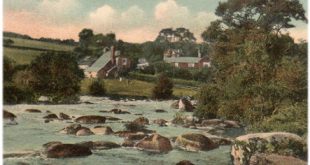