The Tolmen Stone is a large boulder that lies near to the bank of the North Teign river. It has a large hole that perforates through the rock and was formed by river friction erosion. The hole is said to be large enough for a normal sized adult to pass through and is estimated to have a diameter of 1.03m. The last time I visited it was clear that time and Guinness now excludes me from this classification. There are also three other partially worn basins on the boulder. One tradition states that anyone who does manage to pass through the stone will have immunity from all rheumatic disorders. This feat is not possible when the river is in full spate for obvious reasons. The name ‘Tolmen’ is said to derive from the Celtic tol (hole) maen (stone) – hole stone. One of the early Dartmoor writers notes that tolmen stones were used by Druids for purification and that the wrongdoer was lowered through into the water for ‘lustration’ ( In my ignorance I had to look that word up, but it was so apt I have used it – n. purifying rite, especially washing. lustral, lustrical, a. used in lustration. lustrate, v.t. purify). 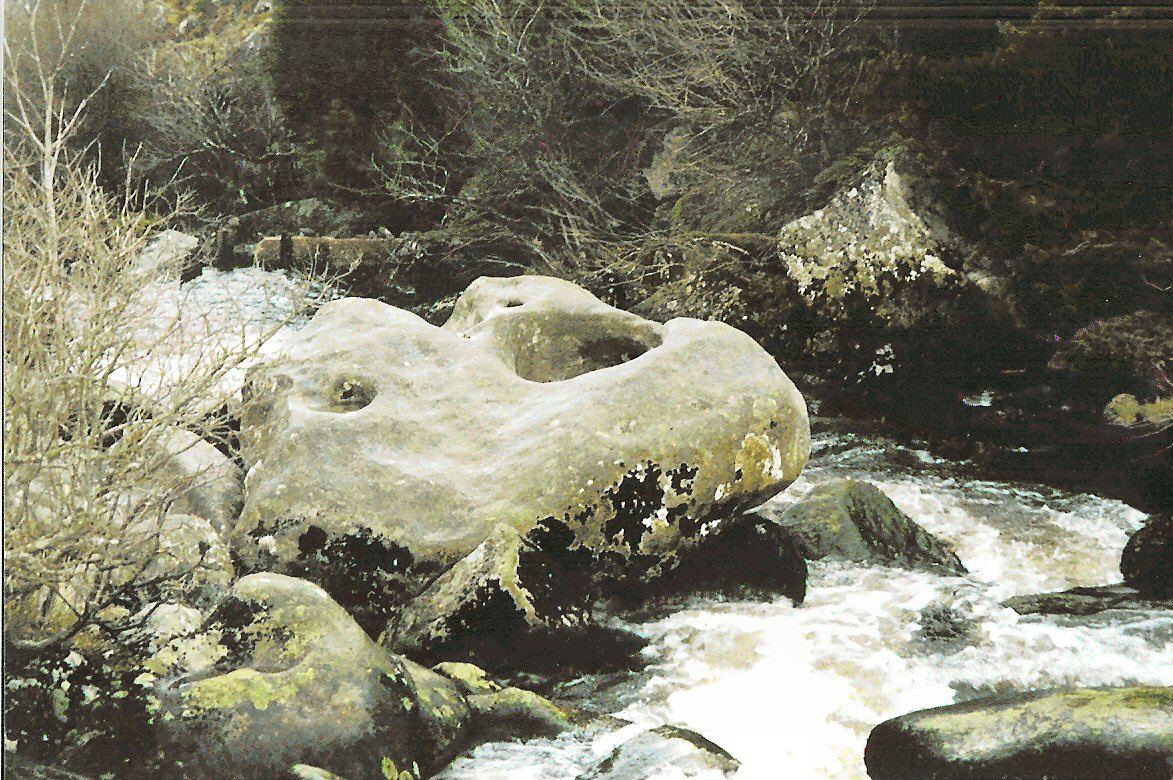 Clearly the rock exists and it has a perforated hole running through it but as to the age of the tradition nobody knows. I would suggest that there was some sort of ritualistic symbolisation seated back in prehistoric times. The most likely associations are of purification, fertility or healing. Take the example of Maen an Tol in Cornwall. Here is an example of a tolmen in, although not its original setting, a prehistoric context. Todd 1987 pp 87-8,  suggests that the holed stone may have been used as a portal for a chambered tomb. This would allow access for burial and removal of remains. Burl, 1976 p.108  offers a similar view likening Tolmens to the porthole entrances of megalithic tombs. In a recent publication, Catherine Tuck suggests that until recently the role of perforated stones has been twofold, use in fertility or healing rites and as traditional settings for the pledging of vows between couples. She also notes that in the case of Maen an Tol engagements were sealed by holding hands through the hole at New Year and that at the right time of the lunar cycle fertility could be assured by climbing through the hole nine times, 2003, p.46. If you read her book you also get the impression that the hole in the stone is meant to represent the female vulva and by climbing through it you are symbolising the act of sexual impregnation.  Mind you if you have or do read this book you can’t help thinking that the author can find a sexual symbol in almost any piece of stone, I bet she could have hours of fun in the big rock streams on Hen tor. Any summer visit to Maen an Tol will reveal somebody crawling through the hole so clearly the tradition lives on. Likewise a visit to the Tolmen Stone will temp most people to attempt the passage of rite although in the Dartmoor Tolmen the tradition is of a healing nature.

One other point regarding holed stones, if you ever visit a Dartmoor farm take a look at the keys to the farm doors. I bet you will find at least one key with a small holed stone tied to it. These small tolmen versions are called ‘hex stones‘ and it is believed that they will protect the buildings and its contents from witchcraft. Could this possibly be another deep rooted tradition where a holed stone gives protection?

Burl, A. 1976  The Stone Circles of the British Isles,  Yale University Press, London