Home / Tales Of Dartmoor / Told to a Parson

Told to a Parson

Probably one of the most famous Dartmoor fiction authors, if not the most prolific, was Eden Phillpotts. Nearly every one of his works featured true Dartmoor locations intermingled with moorland traditions, folklore, local dialect, events and fictional characters. Some would say that these characters were based on actual moor folk of the times. Here is one of his lesser known stories which appeared in The Torquay  Times & South Devon Advertiser on the 8th of July, 1904. It is a tale of unrequited love, jealousy and a dying man’s confession.

“A little girl came rushing into the gate of the vicarage at Postbridge, Dartmoor; and it chanced that she met the minister himself, as he bent in his garden and scattered lime around unspringing seeds. “These slugs would try the patience of a saint,” he said, hearing footsteps and not looking up. “They have eaten off nearly all my young larkspurs. How can one fight them?”
Then a small voice broke upon him. “Please sir, mother sent me, an I’ve runned a’most all the way from our cottage wi’out stopping once. ‘Tis old Mr. Mundy, please. He’m dying – so he told mother when her fetched him his milk this morning – an’ he says he’ve got something very special to tell anybody as’ll care to come an’ listen to it. But nobody don’t want to hear his secrets in the village; so mother said ’twas your job please, an sent me for your honour.”
“My job – yes, so it is, little maid. I’ll come at once. And they better send for the doctor. It isn’t regular visiting day until Thursday; but probably it’s his job too.”
“Mother axed the old man that; an’ he said as he didn’t want no doctor, nor his traade (medicine) neither. He says he’m nearly a hundred years old; an’ he won’t be messed about with at his time of life; but just die easy and comfortable.”
In twenty minutes the clergyman had walked a mile and crossed a strip of the wilderness that stretched around about the little hamlet of Dartmoor where he laboured. A single cottage separated from the rest by wide tracts of furze and heather stood there, and near it lay a neglected garden. But gaffer Mundy had long ceased to fight the moor or care for his plot of land. His patch of the reclaimed earth returned fast to primitive savagery. Brake fern sprouted in the potato bed: rush, heather and briar choked the currant bushes: fearless rabbits nibbled every green thing.
“Come in who ever you may be,” said an ancient voice. So the visitor obeyed and entered to find the sufferer fully dressed sitting by a fire of peat. Noah Mundy was once very tall, but now his height had vanished and he had long been bent under his burden of years. A bald yellow skull rose above his countenance, and infinite age marked his face. As the earth through centuries of cooling has wrinkled into mountains and flattened out into ocean beds between them, so these aged features stamped and torn with the fret and fever of long life, had become as a book whereon time had written many things for those who could read them. Very weak was the man and very thin. He was toothless and almost hairless; the scanty beard that fell from his chin was white, while his moustache has long been dyed with snuff to a lively yellow. His eyes remained alive, though one was filmed over with an opaque haze. But from the other he saw clearly enough for all his needs. He made a boast that he could not write, and he would not read. There was no book in his house.
“‘Tis you – eh? I could have wished for a man out of your trade, but it won’t matter. I’ve got a thing worth telling; but mark this: I don’t care a button what you think of it, an’ I don’t want none of your bunkum an’ lies after I told it. Sit down in thicky chair an’ smoke your pipe an’ keep cool. Ban’t no use getting excited now, for what I be going to tell ‘e happened more’n sixty years ago – afore you was born or thought about.”
“My smoke won’t bother you?”
“Bah!  I’ve smoked and chowed an’ snuffed for more’n half a century. I’m baccy through an’ through – soaked in it as you might say. An’ as for smoke, if what you tell to church be true, I shall have smoke an’ fire too, afore long. But hell’s only a joke to frighten females. I don’t set no store by it.”
“Better leave that, Mr. Mundy. If you really believe your end is nigh, let us be serious. Yes, I’ll smoke my pipe. And you must feel very, very sure that what you tell me is absolutely sacred, unless you wish it otherwise.”
“Nought sacred about it, I reckon – all t’other way. An’ as for telling, you can go an’ shout it from top of Bellever Tor if you’m minded to. I don’t care a farden curse who knows it now. Wait till I’m out of it; an’ then do as you please.”
He drank a little milk, remained silent a moment with his eyes upon the fire, and presently began to tell his life’s strange tale.
“Me an’ my brother was only children our parents ever had; an’ my brother was five years older’n me. My father, Jonas Mundy, got money through a will, an’ he brought it to Dartmoor, like a fool, an’ rented a bit of Moor from the Duchy of Cornwall, an’ built a farm upon it, an’ set to work to reclaim the land. At first he prospered, an’ Aller Bottom Farm as my father called it, was a promising place, so long as sweat of man poured out there without ceasing. You can see the remains of it yet, for when Jonas Mundy died an’ it falled to me, I left it an’ comed up here; an’ the chap as took it off my hands – he went bankrupt inside three year. ‘Tis all falled to pieces now, for none tired again. 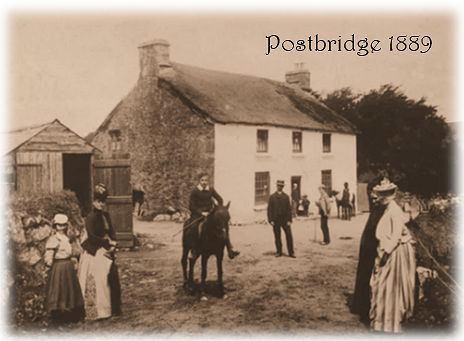 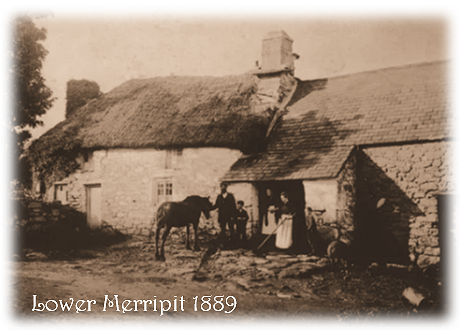 I only seed her once more; but after lying in wait for her, weeks an’ weeks, like a fox for a rabbit, it chanced at last that I met her one evening coming home across the moor above Aller Bottom Farm ‘pon the edge of our last four fields. Then us had bit of a tell. ‘Twas only a fortnight afore she was going to marry Mr. Honeywell. I axed her to change her mind; I spoke to her so gentle as a dove croons; but she was ice all through – cold an’ hard an’ wicked to me. Then I growed savage. I noticed how mincing her had growed in her speech since Honeywell had too her up. She was changed from a good Devon maid into a town miss, full o’ airs an’ graces that made me sick to see. He’d poisoned her.”
“Do try an’ be sensible,’ she said, ‘We were silly children all those years you know, Mr. Mundy. You’ll find somebody much better suited to you than I am – really you will. Have you ever thought of Mary Reep now? She’s prettier than I am – I’m sure she is.”
“Her named the darter of William Reep, a common labourer as worked Honeywell’s farm for ten shilling a week. Then the devil in me broke loose, an’ quite right too. We’ve gone up in the world of late them. ‘Twas always your hope and prayer to come by a bit of property. But ’tis a coorious thing, do you know that you’m standing just where my brother John James stood last time he was seed by mortal eyes.” ‘What’s that to me?’ she said, ‘Let me go by please, Mr. Mundy, I’m late as it is.’ He was never seed again, ’tis a curious thing to me, as you be standing on the same spot at the same time – just as he did – in the first shadow of night. His going, you see, made me faither’s heir, rich enough to give you a good home some day. Then her growed a thought pale an’ tried to pass me. I went home presently; but from that hour Nelly Baker was seen no more. None ever knowed I’d been the last to speak with her; an’ none ever pitied me; but there was a rare fuss made over Oliver Honeywell. He wore black for her; an’ bided a bachelor for five year. The he married a widow; but not till her mother died. An’ that’s the story I thought would interest folks.”
The minister tapped his pipe on the hob and knocked the ashes out. He cleared his throat and spoke. he had learned nothing that was new to him. “It is a strange story indeed, Mr. Mundy; and I am interested to have heard it from your own lips. Rumour has not lied for once. The tale, as you tell it, is substantially the same that has been handed down in this village for two generations. But no one knows that you were the last to see nelly Baker. Did you ever guess what happened?”
The old man smiled and showed his empty gums. “No – I didn’t guess, because I knowed very well without guessing. All the same with your mighty knowledge of human nature, would have guessed very quick. ‘Twas I killed my brother – broke in the back of his head wi’ a pickaxe when he was down on one knee trying his boot lace. An’ me only fifteen year old! An’ I killed Nelly Baker, how it don’t matter. You’ll find the dust of them side by side in one of them old ‘money pits’ ‘pon Bellever Tor. ‘Tis a place that looks due east, an’ there’s a ring of stones a hundred yards away from it. The ‘old men’ buried their dead there once, I’ve heard tell. Break down a gert flat slab of granite aside a white thorn tree; an’ you’ll find what’s left of ’em in deep hole behind. So she never comed by any property after all.”
The ancient sinners head fell forward but his eyes were still open. “Good God! After all these years! Man, man make your peace; confess your awful crime! Cried the clergyman.
“None of that – none of that rot! I’d do the same this minute; an’ if there was anything that comed after – if I meet that damned witch in hell tomorrow – I’d kill her over again, if her still had a body I should shake the life out of it. Now get you gone an’ let me pass in peace.”
The reverend gentleman departed at his best speed, but presently returned, bringing soups and cordials. With him there came a cottage woman who performed services for the sick. But when Mrs. Badger saw Noah Mundy, she perceived that little remained to do. “He’s gone, she said, “soft and sweet as a baby falls to sleep. Some soap an’ water an’ a coffin be all he wants now, your honour; not this here beautiful soup, nor brandy neither. So you had best go backalong, sir; an’ send old Mother Dawe up to help me, if you please.”