I once knew an old farm labourer who worked on a farm near Lustleigh, who sadly is no longer with us but who always wore a strange ring. It had a shiny stone set in it whose colour was hard to describe, the nearest likeness would be that murky green you sometimes see on rotting sphagnum moss. Anyway, the old boy was always reticent to say anything about it and the most information I ever got was that it had been in his family for generations and it was a ‘Toad Stone’. A couple of weeks ago I drove past the farm where he used to work which reminded me of both him and his ‘Toad Stone’. I have heard ‘Snake Stones’ (in fact I’m looking at one on my desk now) and ‘Hag Stones‘, both of which are meant to have mystical powers of protection but never ‘Toad Stones’. So time for some research…

The first reference I came across was in H. W. Seagar’s 1896 book called ‘Natural History in Shakespeare’s Time’, so firstly is there a connection with the famous man? Yes there is, in his ‘As You Like It’ is the following; “… The toad, ugly and venomous, Weare yet a precious jewel in his head…,” – Act 2, scene 1, 12 -17. Which is not very informative so then comes Pierre Boaistuau’s book of 1566 – ‘Certaine secrete wonders of nature’, he wrote the following; “In an other cuntrie of the Indians is founde a stone in the heades of olde and greate toades, which they call Borax or Stelon, which Brasauolus approueth, is most commonly founde in the head of a hee toade, and yet is of opinion that it is rather a boane than a stone, which some affirme to be of power to repulse poysons, and that it is a moste soueraigne medecine for the stone.
A little later n 1569 Edward Fenton in his book ‘Notable Things’ wrote; “There is found in the heads of old and great toads a stone which they call borax or stelon. It is most commonly found in the head of a he-toad. You shall know whether the toad-stone be the right and perfect stone or not. Hold the stone before a toad so that he may see it, and if it be the right and true stone, the toad will leap towards it and make as though he would snatch i, he envieth it so much that man should have that stone.”
In 1658 Edward Topsell published a book called ‘The History of Four-Footed Beasts and Serpents’ and in it he suggests a way of extracting a ‘Toad Stone’ when he says; “There be many writers, which do affirm that there be a precious stone in the head of a toad… there be many that wear these stones in rings, being verily persuaded, that they keep them from all manner of gripings and pains of the belly and the small guts. But the art (as they term it) is in taking of it out, for they say it must be taken out of the head alive, before the toad be dead, with a piece of cloth of the colour of red scarlet, wherewithal they are much delighted, so that when they stretch out themselves as it were in sport upon that cloth, they cast out the stone of their head, but instantly they sup it up again, unless it be taken from them through some secret hole in said cloth, whereby, it falleth into a cistern or vessel of water, into which the toad dareth not enter, by reason of the coldness of water, these things writeth Mizaldus.” – p. 727.
Much later Edward Lupton wrote a book in 1815 called ‘A Thousand Notable Things’ where he notes the following; “A Toad Stone, called Crapandina, touching any part benumbed, hurt, or stung with rat, spider, wasp, or any other venomous beast, ceases the pain or swelling thereof.” – p.5. He later notes that: “A good way to get the stone called crapandina out of the toad: put a great, or overgrown toad (first bruised in divers places) into an earthen pot, and put the same in an ant’ hillock, and cover the same with earth, which toad at length the ants will eat, so that the bones of the toad and stone will be left in the pot..” – p. 54.
Then the research was refined to a more local level and in the Transactions of the Devonshire Association of 1873, Vol. IV, pp. 200 – 202 appeared an article called ‘The Toad Stone’ which was written by W. H. Gamlen. In his paper he mentions that a Mr. Blagdon of Piddington (near Tiverton) was in the possession of a Toad Stone and that over the past sixty years it had been used as a charm over sixty times – this would have been in the period between 1810 and around 1873 . He goes on to say that folk from parishes all around Devon would come to borrow the stone to cure fits and the King’s Evil (a form of tuberculosis). One of Blagdons employees stated that; “it was tied to a piece of string and hung around the neck, so that the stone might reach the pit of the stomach, and used for different complaints that were supposed to be beyond the power of regular medical men curing, such complaints having been caused by some wicked person having obtained power from the Devil to cause mischief.” It was also said that the way to obtain the power of a Toad Stone was for a person who must belong to the Church of England or the Catholic Church to keep back a small piece of the sacrament when at Holy Communion. This must then be carried around the church whilst saying special incantations. The next stage was then to feed the piece of the sacrament to the first toad they came across. Then to actually get the stone the toad must be buried in an anthill as suggested by Lupton. 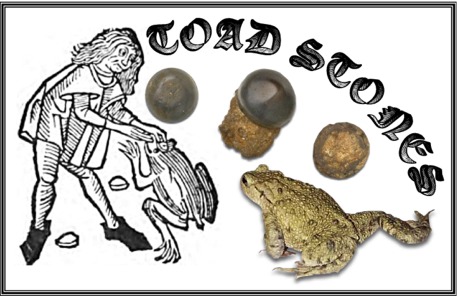 So basically taking a consensus of opinion a Toad Stone was an object of some kind found in a toads head which could cure various maladies, relieve poisonous bites and negate curses placed by use of the Evil Eye. It was obtained either by various methods the favourite being burying the toad in an anthill and letting them deflesh the carcass leaving just the skeleton and the stone. The way to tell if a stone was a true Toad Stone was to put it infront of a live toad and if it jumped towards the stone then it was genuine.
Getting back to the world of logic what is a Toad Stone? sadly the truth is far less mysterious and interesting. Toad stones are actually fossilised teeth of an extinct ray finned fish that once swam the oceans during the Jurassic and Cretaceous eras and is known as Lepidotes. These fish could have been found in both fresh and salt waters and were around about thirty centimetres long. They were covered in thick, enamelled scales and were the proud owners of rows of peg-like teeth. Their main diet was that of molluscs whose shells they were able to easily crush with their teeth. Thus far they are the first known species of fish whose upper jaw was not attached to the jugal bone which allowed them to stretch their jaws into a tube-like shape and hoover in their prey. Today several museums have examples of fossilised Lepidotes teeth with a few having examples of rings set with them.  Today such rings are rarely found for sale and mostly at auctions where they fetch very high prices, in fact at present there is one for sale on Ebay for £3,000. So I wonder where my old friend’s ring is now? and if he ever knew the value of it? He must have had some belief in its supposed powers as he always wore it which for a farm worker could be a dangerous thing with regards to getting it caught. it would be interesting to know if anyone else has come across Toad Stones in the Dartmoor area?