Before the days of modern machines and before the days of the steam engines one of the onerous processes of the harvest was separating the grains of corn from the husks, AKA ‘Chaff’. There were two ways of achieving this, either by threshing or winnowing. Threshing is officially defined as; “to remove the seeds of crop plants by hitting them, using either a machine of by hand,” and winnowing as; “to blow the chaff (the outer coverings) from grain before it can be used for food.” Both operations were very labour intensive and back-breaking work, especially threshing.
In his book of 1858 Samuel Rowe wrote the following: “The ‘flail’ with its monotonous strokes, still resounds from the barn floors of all our smaller farms, where economy or attachment to old usages, has prevented the introduction of the modern threshing machine. Still more rarely is the old method of winnowing resorted to; but in a few instances the ‘Windstone’ may yet be seen, where the process is accomplished by simple manual labour, – the grain being subjected to the action of the wind, on some elevated spot, and passed through sieves, shaken by the hand, until clean provender is produced… In this primitive process, the memory of the method of separating the grain from the chaff, so common in our county, forty years ago, (before the introduction of the winnowing machine,) is still preserved. In Devonshire, the hand threshing instrument is not known by the name of flail. Our vernacular retains the old Saxon word Therscol, by metathesis Threshel, and the aspirate ‘th’ changed into ‘d’, makes it ‘dreshel’.” – p.111.
In 1869, under the heading of ‘The Devon Labourer’ the following was noted; “The familiar sound of the flail is now seldom heard, but we are surprised in the most secluded situations by the smoke and whirr of the steam engine threshing the corn in the fields.” – The Western Times, September 17th, 1869.
In Smiles’ 1867 book – The Life Thomas Telford in regards to Dartmoor he wrote; “… the flail, with its monotonous strokes, resounds from the barn floors; the corn is sifted by the windstow – the wind merely blowing away the chaff from the grain when shaken out of sieves by the motion of the hand on some elevated spot…” – p. 111. 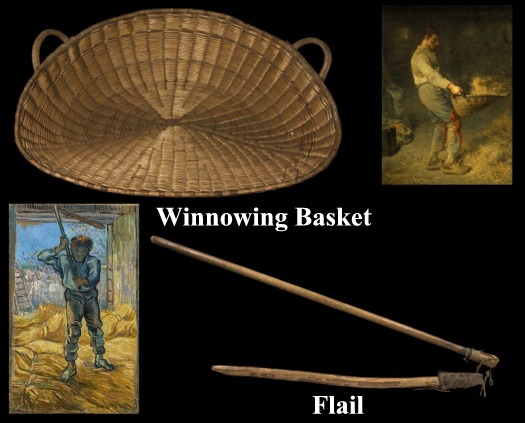 Winnowing – As mentioned, one winnowing process simply involved standing on an exposed  platform and continually shaking the winnow basket up and down and then allowing the wind to blow away the chaff. The Old English word for ‘winnow’ is windwian and from that such platforms have evolved as various names, ie. Windstone, Windstow and Windstrew. On Dartmoor there is a remaining Windstrew at the old manor of Longstone which sits beside Burrator reservoir. This is a granite faced platform measuring six metres long and five and a half metres wide and one and a half metres tall. There are three mounting steps on which one of them has the initials  I. E AND J. E. incised with a date of 1637. The initials refer to members of the one time owners of the manor – the Elford Family. This is certainly the best example to be found so far on Dartmoor, other possible candidates being at Whittenknowle Rocks, on Royal Hill and Hook-in-Tor Farm,
The operator would simply stand on the platform and casting the grain into the air from the winnowing basket the only draw-back to this method was you needed at very least a gentle breeze and a dry day.  In 1796 writing about West Devonshire agricultural practices Marshall said; “Farmers of every class (some few excepted) carry their corn into the field, on horseback, perhaps a quarter of a mile, from the barn, to the summit of some airy swell; where it is winnowed, by women! the mistress of the farm, perhaps, being exposed, in the severest weather, to the cutting winds of winter, in this slavish, and truly barbarous employment.” – p.184. 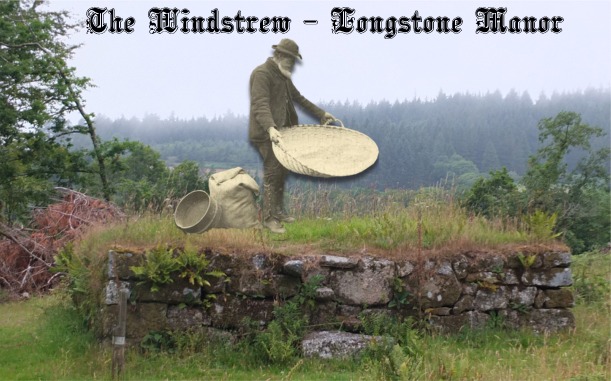 Another method of winnowing would take place in a barn and involved placing a large winnow sheet on the threshing floor and then by using a winnowing shovel simply tossing the grain into the air and allowing the heavier grains to collect on the sheet. A similar method was to use a ‘shaul‘ which was a thick length of preferably beech wood that had been hollowed out to make a three-sided tray which tapered to a narrow lip. This would be held in both hands and then scooping up the grain and tossing it into the air in the normal manner. With both these methods a winnowing fan may be used to create a draft of air. Simple forms of these were simply made from woven basket work whilst a more mechanical version entailed nailing several sheets of canvas to a spindle which was mounted in a frame and turning a handle, thus creating a draft of air.
As noted above, gradually these early methods of threshing grain and seeds became mechanised, initially powered by turning a handle but then steam powered engines replaced those. For the smaller Dartmoor farms the march of progress took a lot longer to come into being, mostly due to affordability. It was around the early 1800s when adverts began to appear in the local Devonshire papers advertising threshing and winnowing machines for sale, usually at farm auctions. The first advertisement that I have come across for a threshing machine for auction in the Dartmoor area was in 1820 for a sale at Lower Pound farm, Buckland Monochorum.
There are several old sayings that relate to threshing such as; “fly like chaff from a threshing floor.” or “whisked about like a thresher’s flail.” and  “rise from the flail,” – the condition of threshed corn. There is a toast used at agricultural dinners and meetings which goes;  “Success to the plough, The fleece and the flail, May the landlord ever flourish, And the tenant never fail.“