Call it a crime of passion or one of pure jealousy the Peter Tavy Murders certainly was one that has lodged itself in the annals of Dartmoor crimes. Today such a crime would warrant a long prison sentence but back them justice was harshly dispensed. What follows is a very lurid account from the time of exactly how William Williams paid for his crimes. Please be advised, anyone of a sensitive nature maybe should not read this!

November of 1893; “William Williams, 19, miller, was charged with the wilful murder of Emma Holmes Doidge and William Frederick Rowe, at Peter Tavy on November 13th last.  Williams and Emma Doidge had been on very intimate terms. One Sunday evening, as the girl was walking home after church with Rowe, he fired at them with a revolver and shot each one through the head. Emma Doidge died at once, and Rowe some hours later. Williams tried to shoot himself afterwards. He confessed that the crime was a result of jealousy. The jury found him guilty; and the Judge observed that they would be wanting in their duty if they had found otherwise, as a more cruel or more deliberate murder he had never heard of. Sentence of death was passed in the usual form.”

“The Home Secretary was unable to find sufficient grounds to warrant him reprieving William Williams, the author of the Peter Tavy murders, and consequently the condemned man expiated his crime on the scaffold in Exeter Gaol on Tuesday morning at eight o’clock.
Eight o’clock this morning was the hour fixed for the execution of William Williams, the Peter Tavy murderer, and long before that time the public began to assemble in the vicinity of the prison. Along the New North Road and the slopes of Northernhay people took up their positions in groups and were to be heard discussing the question as to whether or not the utmost penalty of the law ought to have been carried out. From the highest plateau of Northernhay a commanding view of the prison can be obtained, and from one particular point prisoners can be descried taking their daily exercise. Not a few, in the hope that the dismal procession would, in emerging from the central entrance of the prison block on its way to the place of execution on the left, come into view, had taken up their position at that point of ‘vantage’, but although the condemned man was brought that way nothing could be seen.
As the hands of the prison clock gradually moved towards eight all eyes turned in that direction, and to the minute black flag was hoisted, which was the signal that Williams had expiated his crime. The High Sheriff of the county, Mr. Sampson Hanbury, did not admit the press. Although this was a great relief to the reporters, it is doubtful whether the practice is one to be commended. Second-hand, however, we were able to glean some particulars of the punishment. The condemned man, who had been attended by two warders daily and nightly since his conviction, ate his meals exceedingly well, especially yesterday, when he ate heartily of a beef dinner. Throughout the night he slept fairly well, and arose between six and seven o’clock this morning. After dressing, he was visited by the Chaplain, the Rev. J. Pitkin, who at seven o’clock administered the sacrament.
Billington, the executioner, accompanied by an assistant named Scott, arrived at the prison yesterday afternoon, and both carefully tested the scaffold which is a new erection. Under the rules which now govern prisons, Governors are allowed, if they think fit, to employ an assistant executioner, and Captain Pennethorne , the Governor, doubtless mindful of the fact that the blunder with regard to Lee took place here, although he was not then in charge of the place, thought it best to take precautionary measures. (In the February of 1885 John Lee was sentenced to death for the murder of a Miss Keyne at Babbacombe. On the day of his execution the trap door through which he was meant to drop failed to open three times. It was though that the wood had got wet and swollen due to overnight rain. Each time he was taken away whilst warders tried to mend the trap door. Having experienced such an ordeal the hanging was commuted to a life sentence.) That accounts for the presence of Scott. Both hangmen slept within the prison walls last night, and Billington took up lodgings in the cell adjoining that in which the condemned man slept. 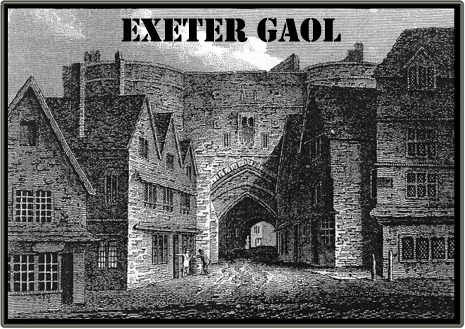 Years ago public hangmen used to bring their own rope and materials for pinioning, but these are now provided by the Home Office, who also lay down certain rules as to how the execution shall be carried out. Formerly, for instance, it used to be left to the executioners to say what distance the drop should be and whether the rope should be lengthened or shortened. Now, as a result of a Commission which sat on the question some years ago, there is a table drawn up according to which the distance of the drop is regulated by the condemned man’s weight. Moreover, the rope is not interfered with. If it is found necessary to let it down or draw it up it is done by moving a chain to which the rope is fastened. The rope itself is provided by the prison officials at Exeter, and in this case it was about an inch thick, and made of the finest material. It was  of a very elastic character, and would, by a sudden jerk, stretch rather than snap. It was subjected to the test of bearing the sudden jerk of a weight equal to that of the condemned man, and was found to stand it easily. The spot at which the scaffold was erected was the same as that where an attempt was made to execute Lee, but all the machinery was entirely new. The scaffold, which is situated in a shed very much like a coach house on the northern side of the prison, and unconnected with the building, is erected over a pit which is approached by a flight of steps going down on one side. Over the center of the pit are the two trap doors, and the condemned man stood on them exactly where they meet. On each side of these trap doors is a fixed platform where the warders and executioners stood.
A few minutes before eight o’clock Billington went to the cell and performed the operation of pinioning the condemned man’s arms. This is also done differently from what it used to be. Formerly a wide strap was bound around the waist, and two smaller straps bound the elbows close to the sides. Now, the hands are strapped together at the man’s back. Then commenced the dismal procession to the place of execution. It was about a two minutes walk. At the head of the group walked the Chaplain of the prison, reading the solemn service of the Church of England for the burial of the dead. The condemned man walked between two warders, and among the other officials present were the Governor, the Under Sheriff, Mr. E. Holditch, the medical attendant, Mr. Mortimer, who has recently been appointed, and is attending an execution for the first time; the two hangmen, the schoolmaster, Mr. W. H. Libby, and other officials.
Williams was led to the scaffold by the warders and principal hangman, Billington. That functionary quickly pinioned Williams’ legs, and the voice of the Chaplain was heard reciting the last words of the funeral service. After the response “Amen” the white cap was pulled down over the condemned man’s face, and Billington quickly stepping back pressed the lever – very much like the levers on the railways, only smaller – the culprit gave a slight scream, and the body disappeared through the trap doors into the hole beneath. By the officials outside the platform nothing could be seen of the man but the dangling of the rope indicated the death struggle. Quickly Mr. Mortimer went down the steps and entered the subterranean compartment and found that death had been almost instantaneous. It is estimated that Williams was not kept on the scaffold more than twenty seconds. He was allowed to drop 7 feet 1 inch. As soon as the black flag made its appearance the vast crowd who had gathered outside dispersed.
OFFICIAL REPORT.
The prisoner exhibited remarkable fortitude. He received the Sacrament previously to the execution, and walked with a firm step to the scaffold. The executioner did his work promptly and quietly, and death was instantaneous. Just before his execution the Under Sheriff asked the culprit if he wished to make any statement to which he replied, “I have nothing to say.” There were present at the execution the Governor of the Prison, the Under Sheriff, the Chaplain, the Medical Officer, and the school master. Billington was the executioner, and he gave a drop of 7ft 1in.” – The Western Times, March 30th, 1893.

FOOTNOTE – In 1905 another Englishman called William Williams murdered a teenage boy and mother in Minnesota and was sentenced to death by hanging. When the time came for the ‘long drop’ the trap door opened and Williams fell through it and landed on the floor. In desperation the attending warder began to haul the rope back up with the man still on the end of it. It took a good fourteen minutes for Williams to die. Following this incident the Minnesota Legislature abolished capital punishment in 1911