William Weldon Symington owned a factory at Bowden Steam Mills in Market Harborough where they manufactured pea flour, tinned groats and barley and packet of Scotch oatmeal. In 1870 he purchased Skaigh woods which became known as the Rockside Estate and included an eighty eight acre pheasantry and rabbit warren. The grounds of Rockside were extensively landscaped with picturesque riverside walks, rustic bridges and the now famous ‘Lion’s Mouth Fountain’. William Symington soon threw himself into the local affairs and lodged himself on several committees. Symington was also a devoted teetotaller and devoted much of his time and efforts in promoting the benefits of total abstinence. He embarked on a project to build a local village hall which could be used as a workingman’s club and meeting room. In order to raise the funds to build the hall he held a fete at Rockside in the August of 1881 which was a grand affair as can be seen below.

“Sticklepath is a prettily situated village on the high road from Exeter to Okehampton, and about a mile from Belstone, midway between Sticklepath and Belstone standing on the northern side of the valley through which the Taw flows, is the recently built residence of Mr. W. Symington C.E. “Rockside” and the pretty grounds were three years ago unclaimed common land. Mr. Symington has built himself a commodious residence and laid out the little strip of ground in the bottom of the valley as a pleasure ground, with romantic walks crossing and recrossing the stream by rustic bridges. These walks are normally private but are at all times open to visitors. On the steep hillside opposite a large tract of land, formerly known as Lambert’s Skaigh, has been enclosed and formed into a pheasantry and rabbit warren. Mr. Symington has by no means laboured only for his own pleasure since his settlement at “Rockside”. Like many others  who take an interest in the welfare of their neighbours he happens to be a teetotaller; and, believing in total abstinence to be a very powerful means of improving the conditions of English working men, moral and material, he has done what he could to promote it in Sticklepath and Belstone. His efforts have been very successful. A flourishing teetotal society has been formed, which is continually adding to the number of its members; and the good effect of it upon the morale of the place is distinctly appreciable.

Mr. Symington has also resolved upon the erection of a convenient spot of a Village Workmen’s Hall, which will be devoted to the use of the inhabitants as a place for public meeting for all purposes, and which it is hoped may be hereafter developed into a sort of Workman’s club and Coffee Tavern, with reading room, possibly a skittle alley, and other facilities for recreation. At present however, the design is to provide a public room, the want of which is greatly felt. The only limitation that will be made as to its use will be one prohibiting the sale of intoxicating liquors on the premises’. With this exception, it will be available to  people of all denominations and politics for public meetings, dinners, entertainments, &c. To the nucleus of a building fund, Mr. Symington and his good lady got up a fete, which was held yesterday on the grounds at “Rockside.”

The weather was threatening in the morning, but soon after noon it cleared, and by three or four o’clock the fete field was well filled by a gaily dressed crowd. The Rockside Temperance Band.led by Mr. Daw (which also owes its existence to Mr. Symington) was present to furnish music for dancing; and a variety of other entertainments were provided. Several tents were pitched on the little lawns, which were otherwise made gay with lines of streamers, banners of various kinds, and royal standards. In one of the tents a very pretty bazar was superintended by Mrs. Symington, who was assisted in the sale of a host of ornamental and useful things by her niece Miss Coadby, and other ladies. Master Symington impersonated the “old woman who lived in a shoe,” and disposed of his “children” at very good prices. Among the articles for sale were a number of pretty water colour drawings by Miss Coadby, of scenes in and near “Rockside,” including sketches of “Lover’s Walk,” views of the cleave, &c. In another tent the celebrated dwarf, “Pasha Abdul Aziz,” held a reception, and greatly astonished the visitors. Some mystery attached to this personage, who, judging from appearances, would be a valuable addition to the collection of a Barnum Circus.  There was a third tent, which was admirably fitted up as a miniature theatre, a miscellaneous concert was given at intervals. Kemehaha, the “Wizard of the North,” was to have made his appearance, but did not turn up, owing, it is supposed, to some accident which must have befallen him on his long journey from “the North.” Aunt Sally, however, fulfilled her promise to hold Court on the occasion. She appeared with a beaming face of ebony, wearing a perpetual smile – not to say grin – and the warmest salutes of her many admirers never for one moment put the old lady out of countenance.
Close by her ladyship the game of bowling at coconuts held in iron rings was played. In another part of the ground a sort of juvenile Sally – a niece of the old one, smoked her pipe, while the youths of Sticklepath and Belstone tried to win renown by throwing wooden rings so as to pitch them upon the pipe. It may be mentioned that both of these elegant pieces of statuary were “sculpt” for the occasion by Mr. Symington, who seemed to have engaged in the affair with much enthusiasm. Other amusements included jumping for a horizontal board fixed upon rollers, a game which seemed to have a great fascination for the young fellows present, in spite of the fact that every genuine attempt to make a leap from the treacherous stand-point ended in the competitor measuring his length on the grass to the merriment of the bystanders. At five o’clock tea was provided in a large tent… The day was brought to a close by an illumination of the Skaigh and the cleave by means of “fort fires.” – The Express & Echo, August 4th, 1881.

On the 9th of July 1884 the completed village hall was officially opened by Sir John Phear and, as can be seen above, another fete was held at Rockside with another programme of attractions of the time. All the funds raised on the day went into the building fund. In 1890 Mr. Symington sold Rockside and moved to Buckfastleigh. It might be interesting to note that whilst Symington’s Temperance Society was reported to be successful it was not the complete picture. Other reports of the time suggests otherwise like this comment from 1881 – “teetotal speakers almost got mobbed when holding their meetings in basket-maker Finch’s house, and a person was employed, it was said, to offer insults to the speakers on their way home to Sticklepath.” 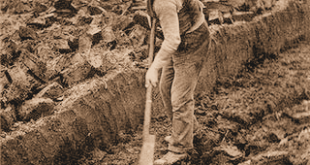