Ever since parts of Dartmoor has been used for training there have been a whole variety of tests carried out but none so strange as the one completed by the ‘Starvation Company’. There is the old adage – “an army marches on its stomach,” which I suppose is fairly obvious because without adequate food rations any troops would be unable to complete any tasks due to hunger issues. But this is a very vague adage as how much of a daily food ration would an ordinary soldier require to be adequately nourished? It was to the rugged landscape of Dartmoor that the military turned to in order to establish exactly how little food a soldier would require whilst maintaining sufficient energy levels to complete a daily march of 15 miles.

On the 16th of September 1910 a detachment of volunteers from the Somerset Light Infantry arrived at a camp on Willsworthy Down and were led by Lieutenant J. B. Taylor.  The men were to take part in an ‘experiment’ supervised by Colonel C. H. Melville M. D. along with three other medical officers from the Royal Army Medical College. As noted above, the whole purpose of the exercise was to establish exactly how little food a soldier could exist on whilst maintaining his efficiency whilst marching fifteen miles a day? Presumably this was to establish logistically what the minimum amount of rations would be needed for soldiers in the fields of combat? The experiment started on Wednesday the 16th of September and ended on the following Tuesday. Their daily ration consisted of two biscuits and 12 ounces of bully beef (from the French bouilli “boiled”), more commonly known today as corned beef, and a cup of milkless and virtually sugarless tea per man per day. In order to ensure that no ‘treats’ were surreptitiously obtained a forty yard ‘out of bounds’  area was established around the radius of the nightly bivouac.
During the exercise active service conditions were rigidly enforced which meant no ‘luxuries’ were allowed. This meant no tents, no change of clothes apart from what could be carried, no tobacco, beer or mineral water and no communication with the outside world. The men were allowed one blanket which was to be their only covering at night. Having suffered all these depravities each day they were tasked with walking fifteen miles in full marching order. It must be said that in the tradition of an officer participating in whatever he expected his men to do. one of the medical officers, Captain N. D. Walker, was also subjected to the same rigorous tests. There was also no let-up in the active service conditions with all marches to be completed no matter the weather or terrain.
Every morning and evening the men underwent a thorough medical examination where they were weighed  and their condition was assessed. After a couple of days it was found that most of the soldiers had actually increased their weight by three or four pounds. However as the exercise progressed they soon reverted to their original weights. They were all deemed to be fit and healthy despite the fact they were walking fifteen miles a day and exposed to the hardships Dartmoor provided. What soon became apparent was not the lack of food that began to effect the moral of the troops it was the “monotony of the evenings’ that was the problem. On most days having marched the required fifteen miles the men returned to camp with wet clothes and boots without the luxury of any comforts such as a meagre cigarette and the prospect of donning the damp clothing the next day. It’s fair to say that this would ‘damped the spirits’ of any hardened soldier even under normal conditions. There is nothing more rewarding after spending a wet and miserable day on Dartmoor than returning home or to some local hostelry and enjoying a well earned beverage and a hot meal in the warm. Imagine then having spent a similarly wet and cold day on the Moor and having to make camp, eat the measly rations, go to sleep with nothing but a blanket knowing full well that the next day you would be wearing the same wet uniform and another tiring day to look forward to? However, despite the harsh conditions virtually every man agreed that after the exercise they were more “fit and buoyant,” than when allowed their normal rations. Could it therefore be said that maybe an ‘army does not march on its stomach’ and at that time perhaps the food rations were too much or of the wrong type? 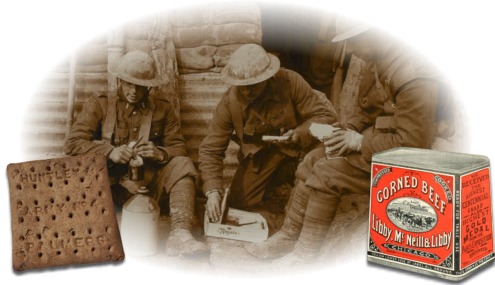 Today the Armed Forces Nutritional Advisory Service states that an army recruit undergoing phase 1 of training would require a daily calorific intake of 3,570 kilocalories. Whereas a soldier undergoing the SAS four week selection test in the Brecon Beacons needs a daily intake of 6,550 kilocalories. Somehow I don’t think in either case today two biscuits and half a pound of bully beef would fulfil their daily requirements. It was also announced in 2017 that bully beef, once the cornerstone of the British army for over one hundred years was to be replaced by a new ration system. This includes 20 different menus, plus six new ones for vegetarian, Halal, Sikh and Hindu dietary requirements. These MREs (Meal Ready to Eat) have been especially formulated for use in hot climates such as Afghanistan.