The first legend attached to this and also the derivation of its name is as follows. There were once three local spinsters living nearby. These were not spinsters in the sense of single ladies but ’spinsters’ in the woollen sense, i.e. wool spinners . One morning before breakfast the three ladies set out to take their spun wool to the local ‘jobber’ (wool trader). When they passed the spot where the fallen cromlech stood they decided to spend some time re-erecting three granite slabs which were like the walls of a house of cards.  The Spinsters capped them with a huge granite slab leaving us with the ‘Spinsters’ Rock’ we can see today. In another version of this tale the Spinsters undertook the task of building the monument as a latter day version of woman-power. It seems the weak and lazy local men couldn’t be bothered to undertake the job so in order to prove a point the three woman decided to shame them by doing the construction work themselves.

Another version is that one day a mysterious old man accompanied by his three sons suddenly appeared from the hills, erected the structure and promptly disappeared, suggesting they were turned into stone. The old man is reputed to be Noah (of the ark fame) and he is represented by the huge capstone with the three imposts being his sons. A more believable version of this tale was that the three uprights represent three local brothers and the capstone their parents.

Having just read Crossing’s book, ‘The Teign’, 1986, pp.26 – 28, I see that he put forward a few more theories on Spinsters’ Rock. The fact that there are three stones supporting the top slab was said to be significant and to represent persons in Northern mythology. In 1779, a writer called William Chapple considered that the name ‘Spinsters’ Rock’ derived from the Celtic phrase, “Lle Yspiennwr rhongoa,” which is translated to mean, ‘the place of the open observatory ‘or ‘the open star gazing place’. In 1848, Samuel Rowe expanded this idea to suggest that in the legend of the three spinsters is a link with the three Fatal Sisters of Norse mythology who weave the destiny of the world. This would presumably refer to the ‘Norns’ or ‘Nornir’ who were three sisters, Urd, Verdandi, and Skuld who lived at the bottom of Yggdrasil – the World Tree. It is said that they would visit any infant immediately after its birth to determine its future. The Norns have also be likened to the ‘Fates’ of Greek mythology. 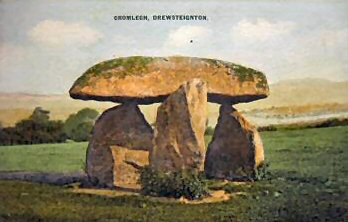 Spinster’s’ Rock is a Neolithic chambered tomb which falls into the eastern of two groups found on Dartmoor and includes other chambered tombs at Buttern Hill and Meacombe. The second group is the western group and comprises of Butterdon Hill, Cuckoo Ball and Corringdon Ball, Todd, 1987, p.80. Originally it would have been covered by a long or oval mound of earth or stones. It has been estimated that the capstone weighs 16 tons and measures 3.65m long by 2.7m wide and 0.6m thick. Burnard, 1986 p.23. Fox suggests that the mound would have served as a ramp up which the heavy capstone could be dragged, 1979, p.50.

According to the tithe apportionment of 1840 the actual field where the tomb is located was called ‘Three Stones’ which is a trifle odd because if you include the capstone there would have been four stones? This particular tomb collapsed in 1862 after the encompassing field was ploughed prior to drilling winter wheat at the beginning of what was a very wet season. Later in that year Reverend William Ponsford paid for its re-erection and restoration, Greener, 2000, p.5. Burnard 1986, p.23 seems to contradict this by saying the tomb collapsed on January 31st 1862 (although local newspaper reports state February) and was restored “by the liberality of the late Mrs Bragg, of Furlong some ten months after”. Either way, sadly, as can be seen from the two pictures below it was possibly not an accurate reconstruction as it may have been. The line drawing was done in 1807 (prior to the collapse) by Samuel Lyson and the photograph is recent.

Theories as to the purpose of chambered tombs range from funereal uses, territorial markers and status symbols or any combination of the three. What is clear is that they show advances in Neolithic technology and culture. The building of such a feature could only be undertaken as a communal activity, if this is the case it would point to a greater level of social organisation. It would indicate that people were taking on communal activities that involved team work in order for them to deliberately change the landscape for purposes other than day to day survival. This could also point to a degree of competition for land and the need to demark boundaries of tribal lands, Gerrard, 1997, pp.30-1.

It is difficult to draw any conclusion from this story, maybe it is a confirmation of what is now known as the ‘multi tasking’ abilities of women or if Burnard was right maybe it reflects the fact that a woman paid for its restoration. As to why Noah should enter into things I do not know. If 1862 was such a wet year then maybe the flood story could be pertinent especially as the local vicar was involved in its rebuilding. The Central England Temperature (CET) series records the summer of 1860 as being one of the ‘wettest’ and ‘coldest’ across England and 1862 ‘notably wet’ across England so clearly their was a lot of rain around. Possibly the capstone does look like a huge stranded ark?

It is interesting to see that there is an inference of associations to Norse mythology, clearly Spinsters’ Rock was in existence prior to the time of the Vikings but it is known that they were present in Exeter which is only a few miles away. Did this legend become attached to the dolmen through the beliefs of the Norsemen?