As the holiday traffic piles down the A30 very few realise they are passing one of the older crosses to be found on Dartmoor. Also it serves as an example of re-cycling down through the ages as the granite feature bears the scars of the stone cutters chisel from early Celtic times through to recent days.

The first recorded evidence of the cross was is in 1874 when Spence Bate describes it being “on the Okehampton Road’; near the village of Sourton, on the high road from Tavistock to Okehampton.” When the new Okehampton by-pass road was being built in 1986 the cross was removed and re-erected in its present position in 1993. This operation gave an ideal opportunity for archaeological investigation which sadly revealed nothing startling apart from an OS bench mark below the ground which suggests that even this site was not the cross’s original one.

Ok, so what is all the excitement about? In a nutshell it is basically  three words – PRINCIP{I} | [FILIV] | A/VDETI  or  PRINCIP{I} | [IV]RI[CI] | A/VDE[T]I. The translation of which goes along the lines of ‘Principius the son of Audentius’ which would indicate that at one time the cross was a memorial stone or grave marker. The inscription was written in mainly Latin capitals and also includes traces of a pattern and a Chi Rio cross. It has been suggested that the words were actually cut and rubbed out as opposed to pocking. Clearly this would indicate an early age for the stone and English Heritage describe the original stone as an inscribed stone dating between the 6th and 8th centuries.

Further details can be found on the Celtic Inscribed Stones Project database and the English Heritage Pastscape database.

So here we have an early Christian inscribed stone standing somewhere in the vicinity of Sourton? Then sometime between the 9th and 11th centuries somebody decided that they wanted a wayside cross erected. The stone cutter looked around and came to the conclusion that the early stone would be ideal for a cross, possibly to save time in cutting a new slab. He then set to work fashioning a cross and realised that the size of the slab would only allow such a shape to have very short arms. As can be seen from the picture above the re-shaping cut away much of the original patterning but just managed to leave the Latin inscription intact.

For around 600 years the cross stood in peace, then a way warden was given the task of erecting an early signpost or directional marker. Once again the cross was deemed as being the perfect thing, it simply would involve cutting the respective directional markers on its face. So after the mason did his work the cross then sported an ‘H’ (Hatherleigh) on its  north-western face, ‘T’ (Tavistock) on its south-eastern face, ‘O’ (Okehampton) on its north-eastern face, and ‘L’ (Launceston) on its south-western face. It has been argued that this was done sometime after 1696 because it was in this year that Parliament passed an act for stones to be erected with the appropriate letters of directional town markers.

When the Okehampton by-pass was being built the cross was taken to nearby Okehampton Castle for safe keeping. Once it had been taken up an examination revealed an Ordnance Survey bench mark had been cut into it, this had been previously unseen as in-situ it was under the ground. This would suggest that previously the cross must have been situated elsewhere in a place that would have given the surveyors access to cut the bench mark. Either that or the ground level had increased at its latest situation, or it has sunk deeper into its socket hole.

Today the dimensions of the cross are that it stands at a height of 2.1m, has an arm span of 53cm, a circumference of 1.27m, and has a north-east/south-west alignment. 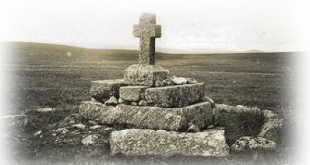