SLOE GIN –
For several hundred years gin has been a popular drink but in its early days there was a great divergence in its price and quality. And so either as a personal preference or to improve its taste people began experimenting with its flavour. One day somebody tried adding sloe berries to the gin with spectacular results and since then sloe gin has became an institution, certainly in Devonshire. Even despite the modern fad of using a whole host of modern tastes such as rhubarb, orange, raspberry, elderflower etc. etc. sloe gin has stood its ground – especially on Dartmoor.

On Dartmoor the Blackthorn tree has been said to be an unlucky tree as the ‘Crown of Thorns’ which Jesus wore on his way to be crucified was made of Blackthorn. But as the saying goes “Every Rose has its Thorns’ so although the Blackthorn has some vicious thorns so too does it produce sloe berries. It is from those coveted raven black fruits that for centuries moor folk have made ‘Sloe Gin’. Firstly the local name for the berries are ‘slones/sloan’ and as summer turned into autumn eager eyes would be watching the hedgerows, copses and woodlands for  blackthorns in order to gauge the size of the forthcoming crop. Some years there would be an abundance of berries whilst other years there would be a dearth, all depending on the weather conditions of that year. If you knew of a remote blackthorn that was renown to bear a good crop then this in many cases would be kept a coveted family secret. There was also an old taboo that to pick the white blossom of the blackthorn would be inviting bad luck. However, this belief may well have been ‘false news’ in order to discourage those of a superstitious nature from picking it and thus securing a good berry harvest. The other vital ingredient for making sloe gin was gin itself and in the case of Dartmoor it was very much a local taste for two reasons. Firstly the sloanes grew on Dartmoor and secondly probably the most popular brand of gin was Plymouth Gin whose recipe dates back to 1753. Not only was it distilled a few miles from the Moor but the water used in the manufacture of it came from a Dartmoor source.
Sloe Gin has always been classed as a local and traditional libation of Dartmoor. There would be hardly any farmhouses or cottages that did not have a bottle somewhere. To this very day sloe gin often forms the stirrup cup at the various hunt meets. It would often be found in the secreted flasks of fishermen and other sporting gentlemen on those cold bleak days out on the moor. Likewise it would often make an appearance at the various livestock sales on cold market days, either in a flask or bought at the local inns. As Christmas time would be around the time the sloe gin became drinkable then it played a vital role as a must have for the drinks cabinet or as Xmas gifts. If you ever look back through old local newspapers you will find numerous adverts for Christmas Sloe Gin around November time. A month or two earlier the adverts were for gin which would be used to make the sloe gin. Some of the more popular brands of commercially made Devonshire Sloe Gin were – James Hawker of Plymouth – Pedlar Sloe Gin, Gaydon & Co – Sloe Gin, Banfield’s – Sloe Gin and the renown Uncle Tom Cobley’s Sloe Gin. In 1898 Messrs. Collier & Co. of Plymouth placed an advert stating that they had; “for the past two years been honoured with orders for the Royal Palaces for wines, liqueurs, including the well-known West Country liqueur, the Devonshire sloe gin, an original product of the County of Devon.” Back in the 1940s one travel writer stated of The White Hart in Moretonhampstead that after  a meal; “perhaps to help you on the way a sloe gin of Mr. Gray’s (the landlord) own manufacture, a worthy finish to an English meal at its best.” So there you have it Devonshire sloe gin filling the cut crystal goblets of the Royal Palaces to the lowliest glass cups of the Dartmoor cotts.
There were two important factors which determined the availability of sloe gin – the size of the berry crop and the price of gin both of which would fluctuate each year. In 1924  one local newspaper reported that; “In some moorland households, and possibly some town houses as well. half or so dozen bottles would thus be prepared each year when the sloes became ripe. In the pre-war times good gin cost from half a crown to three shilling a bottle. With the increased price now ruling  it may be that one bottle will have to do the duty of six of the former period.” 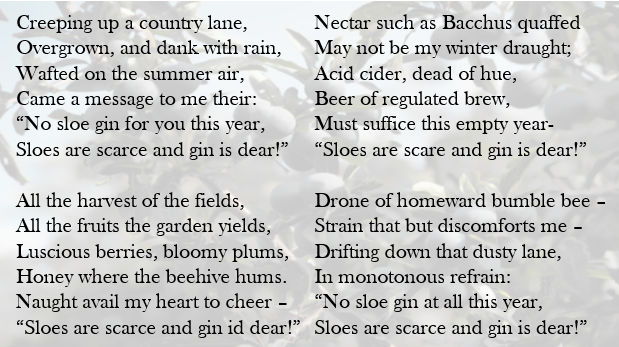 Down through the centuries there have been various methods and traditions concerned with the making of sloe gin so now follows a consensus of these ideas. In normal years the berries are ready for picking around October time. Firstly the sloe berries must be picked after a frost (although in these times you can just put the sloes in the freezer) has fallen on them and only plucked on a sunny day. Once gathered each berry has to be pricked all around with a thorn taken from the same bush from whence the fruit came. Some folk would use a fork but never a silver one as it was said to spoil the berries. The berries once pricked are then put into a bottle filling it three parts full. Into each bottle place a quarter pound of sugar and then fill the bottle with gin and cork tightly. The bottles must then be laid on their side in a cool place. Every second day the bottles must be shaken for a week then after that once a week for two months. Finally remove the berries and filter into a clean bottle, leave it for a few days and the enjoy. There are shed loads of recipes for sloe gin on Google, the search I did returned over 1 million.
Sloe berries have had a lot of  sayings attached to them over the years. In 1580 Tusser added the following advice after gathering sloes; “By th’ end of October , go gather up sloes, Have thou in a readiness, plenty of those: And keep them in bed-straw, or still on the bough, To stay both the flix (diarrhea), of thyself and thy cow.” Seeth water, and plump therein plenty of sloes, Mix chalk that is dried, in powder with those; Which so, if you give, with the water and chalk, Thous makest the lax for thy cow away walk.” This alludes to the one-time idea that such a concoction was beneficial for curing diarrhea in both humans and cattle.  Another rather ambiguous saying goes; “Plenty of slones, plenty of groans.” This can be taken either to mean that the “groans” would be the result of eating large quantities of what in effect is a sour and acrid berry. Alternatively it may mean that in a year when blackthorns are loaded with berries this would fortell of a harsh winter this being the “groans”. Akin to this was also; “Many haws, many snaws, many sloes many cold toes.” which basically meant that if there were plenty of hawthorn berries in the hedgerows it foretold of a heavy snowy winter but if there was a heavy crop of sloes that meant a cold but dry winter.
A more sinister use of sloe berries was its use in adulterating port wine as this writer explained; “The juice of sloes is much used by fraudulent wine merchants in adulterating port wine, for which purpose it is well adapated on account of its astringentcy, slight acidity, and deep red colour: many a fop when taking his port wine and tapping his boots with his beautiful blackthorn stick, is little aware that both wine and stick have the same origin.” What is meant by both wine and stick having the same “origin” is the fact that blackthorn wood being hard and tough was/is often used to make walking sticks.
Generally speaking sloe gin is said to be good for warming the body and soul and a bleak winter’s day which is why it’s a Dartmoor favourite. It has no magical cures apart from the rather vague idea that helps relief the symptoms of a winter cold and possibly cure a headache. I would be rather cautious with this last one as too much will certainly give you one. BUT… more than anything there is nothing better on a sunny and crisp, frosty October day than wandering along the Dartmoor hedgerows, woods etc in search of the ‘motherlode’ of sloe berries. Yes, your fingers will be stained black, yes, your arms may look like you’ve gone ten rounds with a demented wild cat, yes, you may have a belly ache if you were daft enough to eat the berries, BUT think of the finished product! As you sit laboriously pricking the berries you may wonder why bother (quick tip, instead of using a fork or pin try one of those spiky wire pet brushes) BUT think of the finished product! Imagine the pleasure of seeing the sloe gin slowly ferment and the frustration of not being able to sample it, BUT think of the finished product! Then the day will finally come, the product is finished and time to enjoy the fruits of your labour (and the fruits of the blackthorn). Go and buy your favourite cheese and buscuits and forget the port, nothing more ‘moorish’ (if the sloes were picked on Dartmoor) than a cheese board and sloe gin.  Finally, never throw the steeped sloes away after they have done their magic, these can make tastsy preserves or cordials.