Not that long ago you could be forgiven for thinking that Dartmoor was akin to the wild west. There were robbers, thieves and rustlers or as they are called on Dartmoor – ‘Sheep Stealers’ behind every rock and boulder. One notorious gang were holed up on the high moors near the mighty hill of Cosdon. To say that they were mean and honery would be putting it mildly, they roamed with fear of no man and would as sooner slit anyone’s throat as look at them. At this time there was a small hut called ‘Cosdon House’ and this is where they lived, although the word house suggests a substantial edifice, this was no more than a hovel. The band of ‘no goods’ would stalk the northern fen in search of sheep to steal, some of which would be sold to unscrupulous dealers and the rest would be eaten. Things got so bad that the local farmers feared to venture out on the moors and so they had to keep their flocks in the small homefields. These soon became poached and grazed out which meant the sheep began to lose condition which in turn lead to the farmers losing money. Official help was sought and a few searches were made of the Cosdon area but these men knew the moors well and from their vantage point easily spotted anyone below, this gave them time to simply ‘disappear’ amongst the rocks and clitters.

Samson Bow was a local man and it was he that suggested to the farmers that the best time to catch the sheep stealers was at night when they couldn’t see anyone coming. A posse was formed and one dark night they ventured forth, armed with dreshels, axes and clubs. Being moormen they too knew the land and it did not take them long to silently creep up to Cosdon House. When they got there it was obvious that their stealth had paid off because the sound of mens voices could be heard inside the hovel. It appeared that some sort of argument was taking place and so Samson and his posse took the chance and stormed the shack. As the door caved in it was as if a firework had gone off, men exploded from windows, doors, and any other gap they could find. The sheep stealers made off down the hill with Samson and his boys in hot pursuit. It did not take Master Bow long to realise where the chase was heading and he and his men ran even harder on the heels of the gang. As expected, just as the hill began to flatten out the outline of willow clumps could be seen silhouetted against the night sky. The Dartmoor men knew that this was where they stopped, luckily or sadly, depending on whose viewpoint you take, the sheep stealers carried hurtling across the moor. One by one the sounds of splashing, sucking and screams could be heard. As predicted the notorious gang had got themselves ‘stogged’ (stuck) in the dreaded ‘Raybarrow Pool’ where the thick, oozing mire was slowly sucking them in to its murky depths. Samson and the farmers stood around the edges of the filthy morass and morbidly watched the sheep stealers slowly drowning in liquid peat. Some say there was a fierce debate as to whether assistance should be given others say “nought of the sort ‘appened,” either way help was not forthcoming and the sheep stealers were never seen again. The slopes of Cosdon soon returned to normal with sheep contentedly grazing on its sweet moor grasses, Raybarrow Pool continued to bubble and gurgle as the mire digested its gruesome meal.

With regards to ‘sheep stealers’ there is no doubt that this was a serious problem on and around Dartmoor. In 1808 Vancouver, 1969, p.367 clearly states:

“Sheep stealing is carried on to a most atrocious extent, particularly in the vicinity of the forests of Exmoor and Dartmoor. A well attested fact states that one farmer lost in the course of five years no less than 108 sheep from off the former of these wastes; and it is no uncommon case for farmers in the neighbourhood of these moors to lose 20 sheep in the course of a season .”

On the 13th of August 1835 the following newspaper report appeared which clearly shows that in the 1800’s the sheep were not being stolen for their meat, it was the fleeces that were the temptation:

“Extensive depredations amongst flocks depastured on the commons bordering Dartmoor have for several summers past been committed by some villain or villains unknown. This summer their proceedings have been marked with a degree of atrocity such as, perhaps, was never before heard of. Three farmers have lost 21 sheep; the dead bodies of nine have lately been discovered hid among the rocks or thrown into pits, their fleeces having been previously shorn in such an unworkmanlike manner that large pieces of their skins were cut off with the wool which was carried off. The sheep so found appeared as if deprived of life by strangulation. It was very recently ascertained that the wife of a labourer at Walkhampton, who owned no sheep, and was an idle character had been selling wool. She was apprehended, and upon taking the depositions of divers witnesses, before the Rev. Walter Radcliffe, a magistrate of the county, it was proved that she had at three several times in June and July sold to a most respectable woollen manufacturer of Tavistock, who has mistaken her for the wife of a farmer, quantities, amounting together to upwards of 56lb, at 11d. per lb; but she positively refused to state how she became possessed thereof, although she was twice remanded, contenting herself with asserting that she “came by it honestly.” This however, not satisfying the worthy magistrate, she was on Saturday committed to the county gaol, to take her trial at the next quarter sessions. Rewards have been offered by the Roborough Association for the Protection of Property, as well as by the farmers themselves, and the clue was obtained. This case, it is hoped, will be a caution to all buyers of wool, and induce them to be most particular in their dealings for small lots, and carefully to register the names and residence of sellers, with the quantity and the price at which it may be purchased.”

There is an old Dartmoor rhyme called the ‘Parson’s Sheep’ which relates to sheep stealing :

But dawn’t zay nort about et.

I zinged it up and down awl day,

A passen yard (heard) whot I did zay,

An ax’d me in a civil way

A suit ov cloase an munny down,

An ‘zing et tu that people.

Another version of this tale explains how having heard the first four lines of the above rhyme the parson asked the child if he would come to church on Sunday and repeat the ditty to the congregation to which the child agreed. So during the service the parson announces that what the child was about to say is as “true as the words in the bible.” The child got up and said:

“When I was out for a walk one day

I saw our parson bright and gay;

He was rumpsing Sally on the hay

And he turned her upside down’.“

As to Raybarrow Pool, that definitely exists as anyone who has tried to cross it will vouch. On Dartmoor, especially during wet spells there are two places to avoid, one is Fox tor mire and the other is Raybarrow Pool. Talk to any moorman or keen Dartmoor walker and they are guaranteed to have at least one unpleasant story about Raybarrow. Personally I think Raybarrow is worse than Fox tor as far as mires go. There is a local tradition that at one time there was a ‘Whispering Stone’ near Raybarrow Pool which if asked at the time of the full moon would reveal who the questioner was to marry. It was also said that at dawn on New Year’s Day the apparition of a beautiful woman could be seen near to the Whispering Stone. 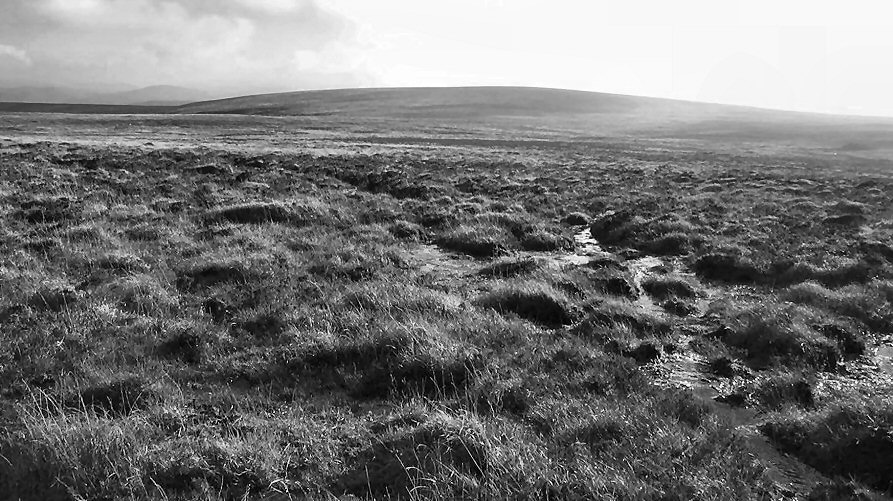 Again as with Cranmere Pool and Duck’s Pool, Raybarrow was probably drained by work of the tinners, there is plenty of evidence of them in the form of pits and mounds.

Vancouver, C. 1969 General View of the Agriculture of the County of Devon, David & Charles, Newton Abbot.