Just outside of Widecombe is a small secluded hamlet called Ponsworthy and in one of the small cottages by the ford lived an old labourer called Hodge, he shared the cott with his wife and grandson. The small lad lost both of his parents when he was but a tacker and so now he lived with his aged grandparents. When the boy was around eight years of age another tragedy struck when the old Granfer became very ill. Day by day he grew weaker and weaker, it would have been pointless to call the doctor because they couldn’t afford his fees so the old grandmother did all she could to ease his passing. It soon became obvious that the old moorman would not last the night so he called his grandson over to his bed, he told him that when he had gone there was nothing but the small cottage and that the boy must look after his grandmother. He told the lad that whatever he did in life he must be honest and industrious and always faithful to his master and above all to “alwis mind yer P’s and Q’s”. The lad was then sent to bed, when he woke the next morning the old boy had passed away.

For the next few years old mother Hodge had a hard struggle as she was now the bread winner and this meant working all the daylight hours day in and day out. She washed, cleaned, harvested, gleaned, picked hurts, weeded the fields and a host of other jobs. What she earned barely kept the lad and herself in bread but bravely they struggled on.

Eventually the time came when the grandson was old enough to start work, which he did with no complaints. His first job was bird scaring for a local farmer but as he got older and stronger he started labouring. The money he brought home each week was a blessing and it mean the old woman could ease back on what she did. They were still by no means rich but they could occasionally afford a piece of mutton or ham for the Sunday roast. When work got hard the lad always remembered the advice his Granfer gave him and this saw him through. He was loyal to his master and always treated his betters with respect and without fail turned in a honest days labour.

That winter the weather was the worst in living memory, if it was not bitterly cold it was damp and misty, the sunshine had gone south for the winter. It was therefore no surprise that the boy became sick, he was out in all weathers with hardly a coat to get rugged up in. The illness began with a cold and then developed into the ‘fog fever’, this meant he was bedridden for many weeks. Once again without his wage they were penniless and the old woman had to drudge on toil all the hours God sent.

Gradually the lad got stronger and was able to get out of bed and sit by the fire. One morning whilst he was huddled on the settle watching a pan of pea soup a loud knock came at the door. He shouted for the visitor to enter upon which a gentleman walked into the kitchen. “How far is it to Widecombe?” he asked. The lad struggled to his feet and replied “about two miles an’ a bit, sir, go drectly on down thik rawd, ee can’t ‘elp but miss it.” The gent looked in the direction of the road, “What sort of habitation is it? I have heard that its classed as a town” he said. The youngster nodded and replied, “‘es tis sir, but I reckon tis naught like what ee would call a town”. He then offered the guest a bowl of soup which was quickly declined on the pretext that stranger had to journey to Widecombe and then on to Moretonhampstead before dark. As the man was leaving he paused in the doorway and seemed to be staring at the old grandfather clock that was stood in the corner. “That is a fine timepiece young man, I don’t suppose you would consider selling it?”. The lad was amazed, but then shaking his head replied “Couldn’t do that sir”. The gentleman became slightly annoyed, “I collect rustic items you know, and that would sit well in my drawing room, I’ll give you a handsome price for it, young sir.” The lad was sorely tempted by the thought of some coin but then remembered that the old clock was about the only possession his old grandfather passed down. No matter what he was offered the clock was not for sale, “I be sorry sir but that old Granfer clock belonged-.” “Yes, yes,” the stranger snapped “I have heard it all before from you rustics, it is an old family hand-me-down and you couldn’t bear the thought of being parted from it”. The boy looked him straight in the eye, “es sir, ee ‘as the measure of it, I wun’t be parted from un”. The gent donned his hat and looked down the road, “so its up that road for Widecombe then.” The boy nodded “es Sir, right up that road”. The man shook his head and strode off, “good day young man.” The lad answered “I wish ee a gud marnin’ sir,” and returned to the settle and the pea soup. As he started stirring the pan his grandmother came in from the scullery, “that was proper gud to heer ee spaik so politely, tis always right to do so, an as yer Granfer said, always mind ee P’s and Q’s.” 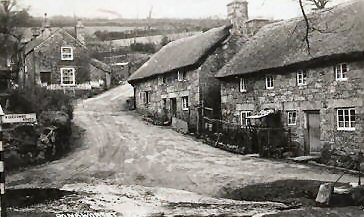 The boy was fair angry at having to give up the chance of some badly needed coin, he suddenly flung the wooden ladle onto the table and stood up, “never mind the peas, they kin care fur ’emselves, tis the Q’s I be concerned with”. With that he went went out the back and returned with two small iron plates. These were shoes that the drovers used to nail on the cattle’s hoofs when they were driving them up to London and on Dartmoor, because of their shape they were known as Q’s.

He quickly stuffed them in his pocket and made his way up the road after the gentleman. He had just crossed the small bridge that spans the West Webburn and had got as far as the ‘C’ or county stone when he spotted a leather purse lying beside the verge. He picked it up and then hurried on uphill in pursuit of the gent. He eventually caught him up on the corner outside Bittleford farm, “‘ave ee lorst aught sir?” he breathlessly asked. The gent searched his pockets and with surprise exclaimed that he had lost his purse. “Here tis sir, I picked ‘n up for ee,’ the lad replied as he handed over the heavy leather pouch. The man eagerly took the purse and shook it, “did I drop it in your abode, young sir?” he enquired. “No sir, ee drapped ‘un in the rawd, I bain’t got ‘n abode,” was the lad’s reply. “How come you were coming along the road? Have you changed your mind about selling the clock, young sir?” The lad shook his head, “naw sir, I brung ee these” the lad exclaimed and held out the two ox shoes. “Tis what oxen ‘ad put on their hoofs yeers agone, and I thought ee might want ’em, they be proper rustic as ee call it, and us call un Q’s on Dartymoor.” The stranger carefully examined the two shoes, looked at the lad and said, “yes young sir I will purchase them but only at the price I set.” The youngster shrugged his shoulders and muttered, “naw, ee kin ‘ave un if ee wants”. The gent vigorously shook his head “my price or nothing”, the lad agreed. The man took the Q’s and put them in his pocket, he then opened his purse and took out three gold sovereigns, placed them in the boys hand, doffed his cap and strode off towards Widecombe.

The poor lad was dumbfounded, he had never seen let alone held such wealth. He rushed back to the cottage firmly gripping the three coins in his hand. As he walked into the kitchen his grandmother began berating him for leaving the peas unattended. He walked over to the hearth and stirred the steaming pan, “there grandmother the peas haven’t a spoiled and I be minding them, an I ‘ave also a minded me Q’s so I ‘ave a minded both me P’s an me Q’s jest as Granfer said, and see what that’s got I”, the lad held out his hand and showed the old maid the three shiny gold sovereigns.