It was a crisp Autumn morning and the sun was just beginning to rise as the ploughman led his team down the lane to the newtake. The horses breath could be seen like baccy smoke puffing out of their nostrils. The heavy shoes were clopping along the lane with the occasional spark shooting off a protruding rock. The  ploughman knew him and his horses had a hard days work ahead of them because this was the first time the newtake would have been ploughed. He and some other labourers had spent all last week with crowbars and horses clearing the land of as many rocks as they could. The evidence of their work stood in the corner of the newtake looking like a new version of the ancient burial cairns that were further up on moor. On entering the newtake he set his ‘sull’ (plough) and harnessed up the plough team. With a hearty cry of “get on” he bit into his first furrow. The horses leaned right forward into their harnesses as they dragged the sull slicing through the virgin soil. The air was heavy with the smell of freshly cut peat and it was not long before a flock of gulls were greedily pecking at the grubs and worms exposed in the furrows. Occasionally there was a mighty squawking as the birds fought over the big juicy tit bits. Relentlessly the horses plodded up and down and occasionally the ploughman would stop and check his furrows were straight. He knew only too well that neighbouring farmers would be casting a critical eye over his handywork and he wanted them to see clean, straight furrows, the work of a craftsman. As he toiled away the morning sun rose higher in the sky and soon his growling empty stomach told him it was nearing breakfast time and sure enough far in the distance he could hear the church clock chiming. When he reached the headland the ploughman wiped his brow and wistfully glanced at the newtake gate to see if there was any sign of his son bringing his food, not a soul was to be seen so he pushed on with a new furrow.

By this time he had ploughed about half the field and standing in the way of his next furrow was a huge granite boulder, he remembered this one from the previous day for as hard as they tried the men just could not prise this one from the ground. The rock still had the white scars from where the crowbars had scraped along it. He steered his plough team slightly to an angle that would allow the furrow to pass as near as it could to the boulder. In response the two horses slowed, snorted and then once again leaned into their harness. 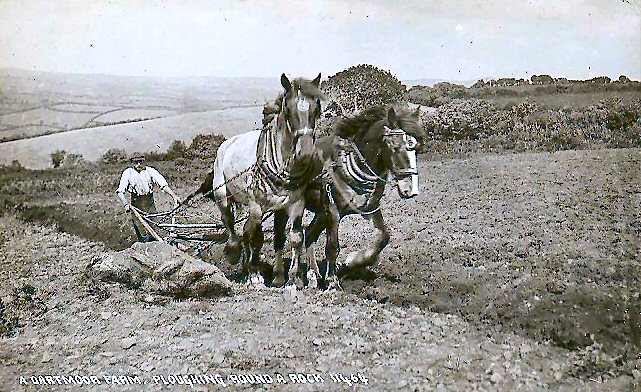 This rock annoyed the ploughman because it meant that in the whole newtake of perfect straight furrows there were going to be two that were out of alignment. He knew there was nothing he could do about it but it irked him all the same. On nearing the hindrance he was pleased to see his judgment had been correct and the furrow was just going to miss the mighty granite mass. As the plough share came level he heard voices, thinking it may be his lad coming with his breakfast he reined in the team and turned toward the granite posts that made the gateway. Nothing, but he was sure he had heard voices, yes, there they were again. He cocked his head to one side, they seemed to be coming from under the boulder. Again he strained his ears, yes they were definitely coming from under the rock. Then he plainly heard a voice say “The oven’s hot”. Having been born and bred on the moor the ploughman had been well versed in stories of the piskies, although he was not convinced of their existence he was prepared to adopt a ‘live and let live’ attitude, so it was not a complete shock to here the subterranean dwellers. If anything the talk of hot ovens reminded him of his missing breakfast, again he look to the gate and again it was empty. He raised his eyebrows, tutted and sent the horses on down the furrow, and shouted out “well bake me a cake, then” the voices were silent, “go on bake me a cake”. He reached the far headland and turned the team around and set off back toward the boulder, once again using his skilled eye to bring his furrow as close to the other side of the rock as he could. As he levelled with the boulder he was amazed to see a small, delicate cake sat on top of it. The steam still rising and wafting a glorious smell of freshly baked cake into the morning air. He smiled, stopped the two giant horses, sat on the boulder and eagerly tucked into his ‘fairy cake’. It was the best cake he had ever tasted, it was even better than those his mother used to bake and that was saying something. Obviously the piskies were grateful the ploughman had not torn their boulder from the ground and also they had taken pity on a hungry, hard working man of the soil, for which he was duely grateful for now his stomach growled no longer and he was refreshed to continue with his ploughing.