On what is now the golf course stands a loan stone cross. It actually marked the route of the old monastic track from Tavistock to Buckfastleigh. In the days of the Puritans a local vicar decided this popish symbol should be removed as it was causing personal offence. So he instructed his parishioners to get it removed forthwith. However for fear of divine retribution nobody would undertake the task which as you have seen by the number of lightning strikes the lord sent on Dartmoor folk it was hardly surprising. Well miffed, the vicar decided to do the job himself and walked out to the cross. No sooner had he taken off his cassock than a huge big black bull appeared. The bull angrily stared at the vicar and the vicar nervously stared at bull, bull took exception to vicars stare and charged. The only place of refuge was on top of the cross and so the vicar scrambled up the cross like a rat up a drain pipe. The bull was a persistent animal and made sure the vicar stayed up the cross for the rest of that day and all of the night. The next misty morning found the vicar still on top of the cross, very cold, very hungry and very bum numb. Luckily he spotted a woman walking across the down so tried to attract her attention. This he eventually did but on noticing the figure on the cross and the black beast below the woman fled in terror to the nearby village. He she recounted how she had seen The Devil himself, dressed in black sat on the cross with his satanic beast below. A posse of stout fellows was sworn in and armed to the teeth they set forth to investigate this demonic visitation. On arriving at the cross they soon saw what had happened and after negotiating with the priest the bull was led away and the vicar extricated from his perch. The actual deal they had struck was that in order for the priest to be released he must promise that the cross would remain intact and insitu. Clearly he kept his word because the cross still stands today as a poignant reminder of the day ‘bull’ beat brains.
Harrison, p.204 relates that there was a story that errant prisoners of war would be dragged from Princetown and tied to the cross for a good flogging. Presumably to repent their mis-deeds in front of the Almighty and beg divine forgiveness. This seems highly unlikely as there are much nearer crosses without having to make a 12 mile round trip if that is what they really wanted to do

The old granite cross stands at a height of 2.24 m with a cross-span of 77 cm, it is orientated in a north-south direction, Sandles, p.78. Harrison,  notes that Pixies cross stood by the Abbott’s Way which was a monastic track joining the abbeys of Buckfast and Tavistock. It is also known as ‘The Monk’s Cross’ and has been known as ‘Monkey’s Cross’ (probably a derivation of ‘monk’s) – pp.203-,. Today it stands on a golf course and it is a miracle that it is still there as apart from the above story there have been other ‘near misses’. Baring Gould relates how in the 14th century an Abbot of Tavistock regarded the cross as being “crude and offensive” and suggested it was replaced by a more stylish one. Luckily a brother called Augustine refused to act on the Abbot’s orders because despite its crudity it was still a cross and therefore sacred. – pp.240-241.  Centuries later, when the Whitchurch road was being built, a small quarry was dug perilously close to the old cross, digging ceased before the stability of the cross was seriously threatened. Below is an early 1900’s postcard showing the quarry with the lone cross stood in the middle. 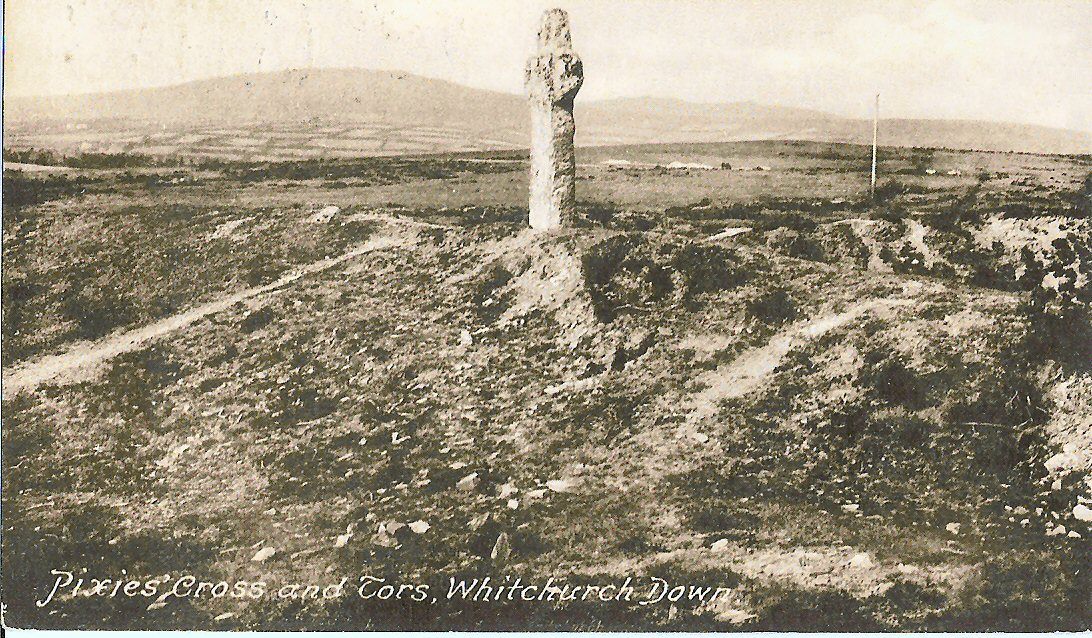 Ian Warburton has kindly sent a copy of a delightful painting his grandfather made of Pixies Cross in 1918, many thanks Ian for sharing this.