Back in the long lost past when Dartmoor was the home to a whole variety of other-worldly creatures the piskies were the cleverest of them all. There can be no arguing that they were mischievous creatures but on the other hand, if treated kindly, they were a great help to the moor folk. Although today many people laugh and jeer at the old piskie beliefs many of their ancient haunts can be found in local place-names. There is the ‘Piskies Cave’ high on Sheepstor said to have been one of their homes, likewise there are several ‘Piskie Parlours’, secluded spots where they used to hold their moonlight revels. There then special places where the piskie councils would take place like the ‘Piskie Rings’ and the ‘Piskie Stone’.  Whenever these revels or councils took place they would be accompanied with much laughter and merriment not to mention mountains of mouth-watering piskie delicacies. What party would be complete without bucket loads of sweet wine and it was a well known fact that nothing could beat their own ‘Piskie Wine’ made from an age-old secret recipe. All that folk knew was that it was made from the sweetest moorland heather honey to which a mixture of unknown Dartmoor flower petals would be added and that it was a mighty potent potion,
Piskies were not the only race of little people living on Dartmoor, there were also the goblins who lived and worked deep underground in the treacle mines. Rarely were these denizens of the deep ever seen among the moorland streams and tors and by all accounts they were best given a wide birth. For unlike the piskies they were no friends of the moor folk who liked nothing better than to cause them harm.
Early one fateful morning just as the sun was stretching its golden rays across the moor a goblin called ‘Fustus’ (who came from Knack Mine) was wandering around the edges of Whitmoor Marsh when he came across the heathery hollow known as the ‘Piskies Parlour’. It was obvious that a revel had been held their the night before as the ground was strewn with leftovers of piskie pasties and cakes. Then, hanging from one of the heather clumps Fustus spotted the head of a foxglove carefully placed amongst the purple bell-like flowers. Gently in his sticky treacle smeared hands he plucked it from the bush and much to his delight spotted that it was still brimming with a sweet smelling primrose-yellow liquid. Could this be the elusive and fabled ‘piskie wine’ he asked himself, and one sip soon told him that yes it was. He did not know enough words that could describe how delicious it tasted, nectar didn’t come close to its heavenly taste. What he did know was that he must have some more, lots more and then even much more. There was one slight problem, well infact two, firstly the piskies hated the treacle miners so there was no hope of them giving it away and secondly he could not make his own as he had no idea of the secret recipe. So over the next few weeks he tried and tested every combination he could, treacle infused with primrose, treacle mixed with honeysuckle, treacle with a splash of water from the ‘Piskie Pool’ and red valarian petals – fail, fail, failure.
It might be worth pointing out at this point that Fustus had a mean streak mixed with a heavy dose of green jealousy – if he couldn’t have it then he made darn sure others couldn’t as well. Such was his frustration at his wine making failures that he decided to make sure the piskies were prevented from making it. For days he brooded on how best this could be done and finally came to the conclusion that as some kind of flower or flower petals were obviously used in the making of piskie wine then if there were no flowers there would be no wine. So one evening just as the final shadows began descending over Okement Hill Fustus tramped across the moor to Crockern Tor. It was here that ‘Old Crockern‘ the ‘God of Dartmoor’ dwelt and it was he Fustus had come to see. His timing could not have been better because the piskies were not in his favour. Apparently some of them had held a revel and one of their piskie lanterns had spilled over and set fire to huge swathes of his moor – a big no no. So, once Fustus had explained his situation ‘Old Crockern’ thoughtfully stroked his bushy beard and said that the best way would be to send an ammil just as all the moorland plants were coming into flower. That way they would all die and there would be no wine. By the way the ammil was when freezing temperatures coated everything in a thick frosty shroud of ice which could last could last for days. Whilst Fustus was having his audience with Old Crockern and unbeknown to them a tiny wren was warming itself in one of the small caves on the tor and she heard everything. Being such a small bird the last thing she wanted was a freezing ice-coated moor to live in so she fluttered off down to Sheepstor as fast as her little wings could carry her. 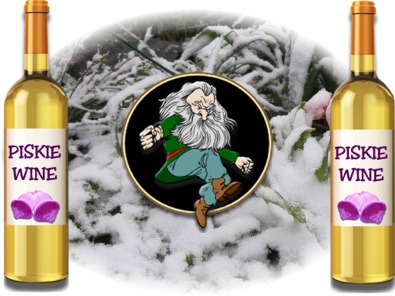 Having heard the wren’s news, Caleb the king of the piskies called an emergency council meeting. It being early spring the little folk had not had a chance to gather their secret flowers in order to make the wine and it was unthinkable to have a revel without the wine. After much debate it was decided the best thing to stop an ammil was heat but the spring sun was not yet strong enough to melt ice. Then a wizzen old piskie came up with the idea of collecting as many mirrors as possible which when reflecting the sunlight could be used to magnify the sun’s heat and melt the ice. Every night gangs of piskies were sent out and would creep into the moorland cottages and ‘borrow’ any mirrors they could find. Big mirrors, small mirrors, cracked mirrors, broken mirrors all were gathered up. Days ticked by and the piskies kept a careful watch on the moorland flowers and once the flower heads began to appear they knew the ammil would be coming. As it was Old Crockern that would be sending the ammil they knew it would start off from Crockern Tor. So, hoards of piskies were sent out to all the high ground which surrounds the tor with their mirrors, day after day they waited buit there was no ammil and the moorland flowers were beginning to bloom. Then on the morning of the 19th of May a sparking cloud of glistening ice wafted out from the tor, it was the ammil! Luckily it was a clear sky with the sun was beginning to cast its rays across the moor. In unison the piskies directed their mirrors towards the sun and then reflected its rays upon the icy cloud which slowly begin to evaporate, turning into a low lying mist.
For the next few days the piskies and their mirrors stood guard on their high points around Crockern Tor but no other ammil appeared and by the 25th of May the sun was strong enough to easily melt any ice that should appear. That year the flowers bloomed like never before and the piskies gather sackfuls of their secret ingredients and to a one they all agreed that years’ wine was the sweetest ever. As to Fustus he kept on with his attempts to make wine but all to no avail, probably because the piskies had picked all the flowers that made their secret recipe.

There is a glimmer of truth in this tale as the 19th and 20th of May are known as Franklin Nights, these were times that apple growers would view with trepidation. Any late frosts would damage the apple trees which normally are in full blossom at this time of year which would then mean a poor cider harvest.