In 1984 Prince Charles described a new extension to the National Gallery as a, “monstrous carbuncle”, but he was not the first to liken a skin blemish unto an architectural intrusion on the landscape. Since the early 1900s Dartmoor or to be more precise, Whitchurch Down has had a structure named after a skin blemish in the form of ‘The Pimple’. Many will say this is an unfair name to be placed on a structure that was sympathetically designed by one of Britain’s most esteemed architects.

In 1909 the Duke of Bedford commissioned the building of some houses along what was to become Down Row, in order to supply these homes with water it necessitated the construction of a reservoir.  The water for the reservoir was taken from the existing Tavistock’s water supply and taken up to the reservoir by means of a pump powered by water taken from the Tavistock Canal. This tank needed an entrance and so it was decided to build a folly which would provide a safe and secure portal for the reservoir. The task of designing this building was given to Sir Edwin Lutyens who also worked on a nearby house called Little court which was built at the top end of Down Row. Lutyens was one of the country’s leading architects who also designed Castle Drogo which sits above the Teign valley near Drewsteignton. So in 1914 a folly was built to house the doorway into the reservoir, this was a triangular structure with each wall measuring 13.12 feet which sat upon a circular base. The only decoration given to the building was a finial placed on the apex of the roof and it was this that gave rise to the building being called – ‘The Pimple’. Lutyens not only wanted to design a building he wanted it to be a focal point which provided a pleasurable purpose to visit, this he achieved by siting the folly on a mound which commanded splendid views of the surrounding landscapes of Devon and Cornwall. From ‘The Pimple’ one can see the towering dome of Kit Hill in Cornwall and the contrasting rugged tors of western Dartmoor. In order to allow people to enjoy these sprawling vistas he incorporated some wooden benches around the building. The actual materials from which the folly was built were local Hurdwick stone and Cornish Delabole slate, both of which are renown for their durability whilst easily blending unobtrusively into the local landscape. For some strange reason The Lutyens Trust makes no mention of him designing both Littlecourt or ‘The Pimple’, maybe the structures are too trivial to note alongside his other projects – see HERE. It is interesting to note that on the early postcard shown below the building is actually called, “The Outlook”? Cook mentions rather vaguely that in 1913, “a horse trough was built near the Pimple at the request of the Whitchurch Commoners”, as ‘The Pimple’ was built in 1914 does this mean the trough was placed there prior to the folly’s construction or is the 1913 date wrong? In the June of 1947 a nearby house at Down Road caught fire and the fire service tapped into the reservoir to obtain a water supply in order to fight the fire.  However in the following moth the Medical Office of Health complained bitterly that by putting the fire hose into the reservoir there would have been a serious risk of polluting the drinking water. Mr. Dury the Fire Force Commander stated that there was no risk as the fire engine and equipment had only been cleaned the night before and added that the reservoir was the nearest source of water.  The Medical Office the commented that had one of the fireman been a typhoid carrier that could have had serious consequences. It was decided to report the matter to the Ministry of health. – WMN, July 2nd.

Inside the building is a metal stairway which leads down into the reservoir which after being enlarged measures 40 ft x 40 ft and was 11 ft deep and would hold roughly 100,000 gallons of water. Over the years the ownership of this water supply passed onto what was Tavistock Urban District Council, then to the North Devon Water Board which became amalgamated into the South West Water Authority and ended up as the privatised South West Water Company. During the 1960s and 1970s the building began to lapse into a state of repair which began to concern a woman living at Littlecourt, the sister structure designed by Lutyens. Mrs Wedd decided to launch a campaign to get ‘The Pimple’ listed and successfully achieved this with a Grade II listing which meant that the owners now had a responsibility to keep the structure in good repair.

In the early 1990s a new source of water was piped across Whitchurch Down which effectively by-passed ‘The Pimple’ thus making it’s reservoir redundant. Fortunately the building’s listing meant that it could not be demolished and in fact the building was re-roofed with Delabole slate in 1993 (although according to the Tavistock and District Local History Society this was in 1996). But in the August of 2000 South West Water decided to sell the folly for offers in excess of £1. Once again the building was spared as an anonymous purchaser bought the building and announced that they would personally ensure its upkeep and repair. If you visit here on a hot day you make the short stroll up through gorse (now gone) with its pods cracking accompanied by the ping of golf balls getting whacked across the down which doesn’t sit easy on the ear. It would also be nice, given the importance of the structure’s creator to see a plaque of some sort explaining the history of The Pimple, mind you judging by the carved graffiti it probably wouldn’t last that long which is a shame.

In August 2008 The Pimple was placed up for informal tender, the condition being that the new owners have to pay for any necessary maintenance and repairs. The agents, Ward and Chowen are asking for offers in excess of £10,000. Whoever, if anyone purchased the building they certainly have not paid for any upkeep as in 2018 the roof is badly in need of repair as are the external benches. As can be seen below I revisited The Pimple in the March of 2020 and it appears that the repairs have at some point been made. 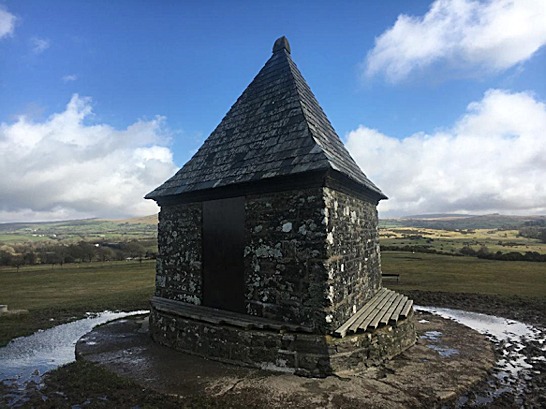 If ever visiting ‘The Pimple’ there is also The Honour Oak and Pixies Cross in the very near vicinity which are also worth a visit.

Tags Dartmoor The Pimple Whitchurch Down