It probably goes without saying but Dartmoor’s north moor can at times be a trifle tricky if you do not know the lay of the land. Back in 1864 an eminent man of the cloth decided that he needed to recharge his batteries and that Dartmoor was the best place to do so. So he travelled down from the fabled metropolis of London and ended up in Okehampton and secured accomodation at the White Hart. After talking to a few locals he decided that he would like to travel from Okehampton across the moor to Chagford – and so began his adventure or should it be misadventure?
Bright and early the next day he ventured down to the White Hart’s stable to hire a horse from Mr. Ball. Being an accomplished rider he saw no problem with this and selected a fine black steed called Rocinante who he was assured was a sure-footed moorland mount. He obviously ignored the fact that the horse was named after Don Quixote’s who was renkown for being awkward, past his prime, and engaged in a task beyond his capacities. When asked if he required the services of a guide the parson dismissed this offer out of hand, after all it could only have been a distance of only six or seven miles. So bravely he and his mount stepped out into the wild blue yonder marvelling the fine views that sprawled before them. However, come nightfall the parson was spotted dejectedly staggering into the courtyard of the White Hart minus the horse. It was clear to the local folk that the unfortunate mud caked parson had become intimately acquainted with one of the moors notorious ‘stables’. At this point it might be helpful to explain that a ‘Dartmoor Stable‘ is the local terminology for a bog or mire, due to the fact that numerous horses have met their fate in one. Now back to the parson, it appeared that after aimlessly wandering around the moor for hours in a vain effort to find his way to Chagford the “sure footed moorland mount’ had come to grief at Dart Head (best not ask what he was doing there). The tale of woe went as follows, whilst trying to lead the horse between the peat hags and across the peat banks one of the banks collapsed and the poor creature slipped down into a stinking ‘stable’ and sunk down as deep as its belly. No matter how hard the parson heaved, pushed and pulled he could not extricate the horse, in fact the more he did the more the flailing steed sunk into the mire. It was at this point the parson realised exactly how remote this god-forsaken land was, the only living creature around was a rather bemused sheep. He tried hailing for assistance in the vague hope that a moor farmer may be near by but those efforts just resulted in a sore throat. The only option now was to somehow find his way back to Okehampton and to enlist a posse of men to rescue the horse, that’s if he could actually find Okehampton. I can imagine his feelings, they must have been the modern day equivalent of hiring a high end car, driving it into a bog and having to tell the rental company it was stuck somewhere but you were not sure where.
Unfortunately due to the pressing matter of the poor horse the only evening meal the parson had was the ‘humble pie’ he had to eat before Mr. Ball. But it did not take long for an elite posse of moormen who for an adequate fee would accompany the parson back to the ‘Dartmoor Stable’. There was only one problem – where was it? Apparently that would be no problem because the parson had the forethought to mark the spot by tying his neckerchief to his riding crop and placing on the nearest peat hag – hmm? So laden down with heavy ropes the men set off in the vague direction of where the parson was pointing. The moon was hanging high in the night sky and the miriade of sparkling stars twinkled over the silent moorland. Unfortunately, try as they might the rescue party could find no sign of the riding crop anywhere as they sloshed between the peat hags. Despite their brave efforts it was eventually decided to call it a day or rather a night and to resume the search in the morning. 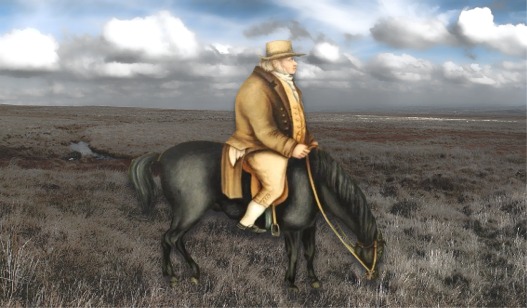 Now the story takes another turn, the same morning that the parson set forth on his adventure two more gentlemen who were also staying at the White Hart had decided they would like a trip out to Cranmere Pool. It seems that these two gents at least had the sense to hire a guide, and I use that term loosely, to take them there. So putting best feet forward they strode out onto the moor behind their trusted guide. As the day wore on the men began to have the suspicion that just maybe their guide was not that well acquainted with the route to the ‘Lake of Cranes’ as he first made out. It seemed that first they would be heading in once direction, then another, then another, then passing places they had already visited and at no time was Cranmere Pool sighted. By nightfall it became blatantly obvious that the guide had got them completely lost somewhere in that bleak and remote spot of the moor. Up and down they trudged slopping through peat stained pools and bog-hopping from tussock to tussock until virtually exhausted they decided to spend the night ‘al fresco’.  It was unfortunate that they never came across the parson and his ensemble of moormen as they could have saved a lot of bother and had the luxury of being guided back to the White Hart. What was even more unfortunate was the fact that whilst wandering aimlessly around the wildest land their ‘guide’ had spotted the parson’s riding crop. Being a man who never missed an opportunity he promptly removed it with a few to selling it, possibly to make up for the fee that he wasn’t going to get for his guiding efforts. Interesting how one event can drastically effect the outcome of another, just maybe if the riding crop had not been removed that would have been the end of this tale.
Come daybreak and more by luck than judgement the guide somehow managed to steer the two men into Mary Tavy. Here they managed to hire a conveyance, or rather a farm cart to take them back to the White Hart where a much deserved breakfast could be had. Over a huge plate of ham, eggs and hot coffee they got into conversation with the parson who was also stocking up on a meal before resuming his search for ‘Rocinante’. Soon both parties were recounting their moorland escapades and bemoaning the fact that with or without a guide that dreadful land was best avoided at all costs. Then the eureka moment came, they just happened to mention the fact that their useless guide had found a riding crop with a neckerchief tied to it and had taken it with a view to making a few shillings. Seeing a glimmer of hope the parson enquired if they could remember where he had found it. Fortunately one of the men said he had a pretty good idea because having traipsed up and down the area for so long it had become imprinted on his brain. Breakfast over the ensemble of the gentleman now acting as guide,  a herd of moormen and the parson once again set forth to rescue the horse. Secretly the moormen were of the opinion that the foxes and buzzards would have been dining in style and sad though the lost of the horse would be the trek would put a few coins in their pockets. Eventually they came to that fateful ‘Dartmoor Stable’ and were astonished to find that somehow the brave equine had managed to pull itself partially out of the mire and although still stuck fast was lying on its side. Even more amazing it was still breathing, stinking but breathing and with the help of strong moorland muscles and a heavy rope it was soon dragged clear. Slowly the processioned wended its way back to Okehampton where a very relieved Mr. Ball awaited their return. Rocinante was given a quick wash and brush-up and safely housed back in it’s stable only this time it was on a bed of straw that it laid its weary head and not a rotting peat bank. The last sighting of the parson was that of him scurrying off to the railway station, muttering as he went and slowly shaking his head.

The moral holds good if you walk or you ride,
Ever keep the right road and beware of the bog;
And the man who will follow or fallible guide,
May expect now and then to be left in fog.