For centuries if a farmer or any keeper of livestock wanted to buy or sell their animals then it was off to market they went. In the not to distant past Dartmoor livestock would have been taken to one of the weekly markets held in most towns such as Okehampton, Tavistock, Ashburton, Plympton, Newton Abbot, Chagford etc. Not only were these markets a chance to buy and sell cattle, sheep, horses and pigs but also other farm produce such as butter, cheese, eggs, etc. They were always very animated affairs when the agricultural communities came together both socially and for business purposes. Today things are very different with almost every livestock market on and around Dartmoor either closed or are scheduled to close. Tavistock still hold a monthly livestock market with Newton Abbot holding a couple of monthly livestock sales but is scheduled to closed sometime at the end of 2019 and Chagford continues to hold a few pony and sheep sales/shows. The nearest large, weekly livestock markets currently held means a trip to either Holsworthy or Exeter for Dartmoor’s livestock owners. In addition there are various on-line groups where livestock can be sold directly without the need for a trip to the traditional market centres. No longer are any of these markets held in the town streets as all have dedicated nearby sites where the animals can be safely penned and sold. No longer will you see the farmers dressed in the traditional breeches, leather gaiters, waistcoat and overcoats and are more likely to see jeans, polo shirts etc, even the famous Barbour Coats are going out of fashion along with the flat caps. Whereas at one time animals would have been driven to market on foot or horseback along the lanes and roads today they arrive mostly in cattle lorries or trailers. The small stone pillars known as bumpers sit outside buildings located on the sides of streets are redundant as their purpose was to stop the long handlebar-like horns of cattle smashing the windows. Today any farmer just wishing to purchase animals will mostly arrive at the market in some kind of 4 x 4 vehicle with no sign of a horse or pony. Yes on sales days the markets are still busy, noisy and at times chaotic events but nothing like they would have been in times of yore, these days Health and Safety and Animal Welfare rule. But what would it have been like to see a livestock market from years gone by when everything took place in the high streets? Below is a vivid and nostalgic description given by an American visitor to Okehampton Market around the early 1900s:

“We picked up market-goers at each hamlet and farm, and before we reached Okehampton the coach-top was buzzing with the soft sound of a Devon dialect almost incomprehensible to our American ears.
An English market-place shows the nearest approach to bustling activity to be found in the rural district. The pigs are scrubbed up, and the cattle groomed down for the occasion. They arrive in droves, in couples, or singly, at the eminently comfortable hour of ten in the morning. “Pigs at Eleven” means that the auction sale begin then. The market auctioneer is a very important personage, often growing rich from his business. He calls off the bids in shillings in a way that drove poor Polly crazy. She always laboriously reduced them to pounds. “Sixty?” Seventy-five shillings? Eighty? Ninety-five shillings?” rolled off with fluency, makes her wonder how much a fat porker knocked down at ninety shillings is really worth. An extra fat sheep, or an especially fine pig, is sometimes favoured with a ride behind its owner in the dog-cart. These dog-carts roll in quickly from all sides, the vehicles being built all on one and precisely the same pattern, and the owner’s rank or riches chiefly determined by the state of the carriage paint and varnish. The horses are all such well groomed, well cared for beasts, that their condition gives small indication of their owner’s estate. The farmer himself scrubs up like his animals, puts on breeches and gaiters, a cutaway coat, and, with his light waistcoat, white stock and carefully brushes hat, he makes an appearance which would be no disgrace to a smart New York riding school master. In his attire he is thoroughly at home. He bestrides his horse, or drives his cart, and even guides a wayward calf or a flock of fine sheep without any loss of dignity, ” but he does look like a bluff squire,” says Polly.
The shepherd’s smock, so picturesque in olden times, has now given place to an ugly linen coat. This garment seems to impel a shepherd to hold up both arms and cry mildly: “Hol Hol” at intervals; the wearers of line coats allow themselves to indulge in more forceable vehemence. The calmness and the patience of the British country folk never shows itself more agreeably than when they are driving livestock to market. Some tiny pigs, who infinitely preferred the seclusion of a shop to the market pens, were pursued by men and boys without sound. Generally they waved handkerchiefs in the unruly little piglets’ faces, as if “Pigs at Eleven” had never been the rule. A single farmer’s boy boy in New England can make more noise driving home two cows at night than we heard all that day at Okehampton. 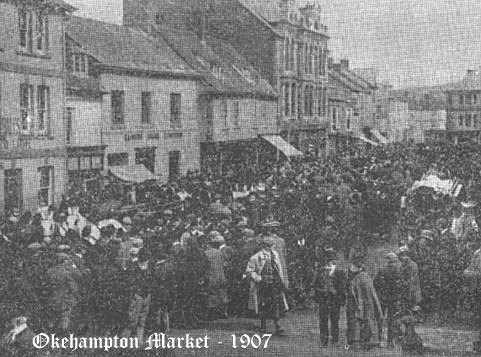 The White Hart Inn has a fine big balcony over the front porch, and on it we camped comfortably as in a private box to look down on the scene beneath. The bullocks ran about, more or less alarmed by their unwanted surroundings. Complaining calves we well protected by anxious cow mothers, who charged boldly at all possible enemies. Silly sheep were kept out of the narrow doors by the watchful dogs, and the grunting, fat, black swine ambled comfortably along.
It is only after the serious business of the cattle auction is over that the real excitement of the High Street begins. Then the farmers and the squires gather together in little groups, talking together and emphasising every statement by striking against their leather gaiters with a riding crop, in good old theatrical manner. The farmers’ wives go shopping; John Ploughman lounges about, looking for employment with his cords tied by strings below the knees, and his loose red handkerchief knotted around his neck. A few soldiers from the camp on the moor add a bright touch, with their red coats, to the sober crowd; the children run about everywhere quietly and happily, and the shepherd dogs have grand romps with their kind reserving contemptuous growls for the town dogs.
Later in the day, after the serious business of dinner is over, horses to be sold arrive one at a time in the High Street, and show their paces. A good looking lot they are, from the l;little moor pony who has just learned to obey a master to the great, lumbering farm horse. It is a lengthy procedure, this horse selling in an English town; the purchaser and all his friends look knowingly over every point of the animal. He is made to go up and down the street again and again. The small boy on his back rides him like a master; he shows off the horse’s gait, the tender condition of his mouth. The beast has been groomed until he shines like satin, and his mane and tail are either carefully waved, or tied up in fantastic style with straw. While this slow, careful sale was going on, and there was no fear of meeting stray herds of such wild animals as we had seen led meekly to market, we judged the time safe to see the sights of Okehampton.” – Josephine Tozier, Among English Inns, 1904, pp. 57-61.