Just outside Princetown once stood ‘The Ockerry‘ or Oakery as it is known today. It stands besides a bridge which spans the Blackabrook as depicted above. It was here that in the days or your great grandparents, great grand parents a poor old woman was making her way back to her small cott. She had been to Princetown to sell eggs at the prison market. As she crossed the small granite bridge a small figure suddenly leapt from the verge and started to frolic and leap in the road. The woman was amazed, she had heard tell of the piskies but never really believed they existed and now right before her eyes was one of them. She did not know whether to run back to Princetown or stoutly carry on homewards. Still the piskie leapt and twirled in the middle of the bridge as if taunting the old woman to cross. The lady remembered what her mother had always told her, “if you meet a piskie you must turn your pockets inside out and do the same to your shawl, that way you cannot be piskie led”. Heeding this advice she followed her mothers instruction and the decided to carry on with her journey. The old woman half expected the piskie to vanish with every forward step she took but she was wrong, still the little creature pranced and prannied in the road. If anything the piskie was coming towards her with amazing confidence until eventually it was gamboling around her feet like a spring lamb. Without thinking she stooped down and with a speed that even surprised herself she made a grab for the little figure. She was even more amazed to find that she had actually caught the piskie in her hands. The problem now was what to do with it, then she remembered she was carrying her egg basket and that had a lid so with no more a todo she popped it inside and firmly fixed the cover. The shouting and hollering that came from the little piskie was alarming, the woman could not believe how loud it could wail but undaunted she carried on down the road. Still the gibbering and muttering continued but it was no use because the old maid could not understand a word of it, the piskie was talking in a tongue she had never heard. This went on for a good hour if not more but then the basket and its contents went silent. The woman thought that maybe the piskie had gone into a sulk because she could also remember her mother saying that they could be “powerful sulkers if things weren’t according to their likin”. But it was a relief to have a bit of peace and quiet. As she trundled on she began to think of ways she could earn a bit of coin from the piskie. Maybe she could keep it in a jar and charge people to see it, perhaps it had magical powers and could conjure up treasures. Either way she would be famous as she was the first person ever to capture a piskie. Yes her fortune had definitely changed for the better. About a mile from home the basket was still silent and so she decided to risk peeking in to see if the little creature was ok. Slowly she lifted the lid a fraction and peered into its dark recesses, she could see nothing so she lifted the cover a bit more, still nothing. In desperation she took the lid right off and you can imagine her grief when she saw the basket was completely empty. What was even worse were that the few pennies she had been given from the sale of her eggs had vanished along with the piskie. There were no holes in the basket so it could not have cut its way out and the lid had been firmly closed so how did it manage to escape? With a sigh she turned had a quick look down the empty road and trudged homewards. Being a positive type of person she reflected on her momentary promise of riches and smiled at the thought of still having the claim to be the first person to capture a piskie, whether people would believe her was another matter. 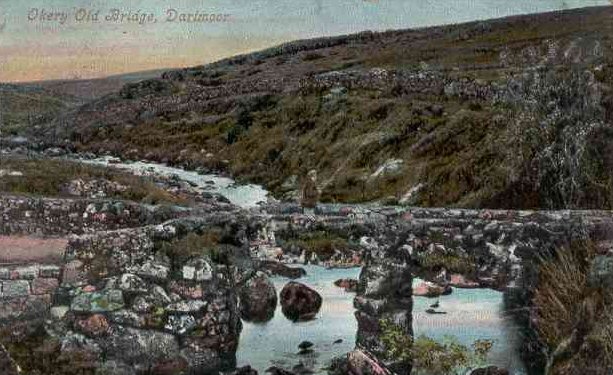 Tim Sandles is the founder of Legendary Dartmoor
@dartmoorlander
Previous No Supper, No Gold
Next Odious Piskie