On the 3rd of September of 1651 the Battle of Worcester took place after which King Charles II managed to escape from the the Roundhead forces by hiding in an mighty Oak tree which was near Boscobel House in Shropshire. Following six weeks of narrow escapes Charles managed to flee England in disguise from where he fled to France, landing in Normandy on the 16th of October. Following the death of Oliver Cromwell in 1658 his son Robert took took over the role of ‘Lord Protector’ and formed what was known as the ‘Rump Parliament’. Due to his inability and lack of experience Robert was forced to resign the post in 1659. Then ensued another period of military and civil unrest which led to the Governor of Scotland, George Monck leading his army to London. Here he forced the ‘Rump Parliament’ to readmit Royalist members of the ‘Long Parliament’ who had been previously excluded in 1648 this then led to the formation of the ‘Conventional Parliament’ in the April of 1660. After a series of concessions made by Chalres II and drawn up in the Declaration of Breda the new parliament resolved to proclaim Charles king and invite him to return. He set out for England from Scheveningen, arrived in Dover on 25 May 1660 and reached London four days later on the 29th of May (which also was his 30th birthday). To commemorate the return of the crown parliament passed into law “An Act for a Perpetual Anniversary Thanksgiving on the Nine and Twentieth Day of May”, declaring 29 May a public holiday “for keeping of a perpetual Anniversary, for a Day of Thanksgiving to God, for the great Blessing and Mercy he hath been graciously pleased to vouchsafe to the People of these Kingdoms, after their manifold and grievous Sufferings, in the Restoration of his Majesty…”
To observe this day of ‘thanksgiving’ it soon became the custom mark the occasion by the wearing of oak apples/leaves which signified that oak tree in which Charles II hid thus evading his enemies. The upshot of this being that May the 29th has ever since been known as ‘Oak Apple Day’. For centuries, being a public holiday, it became a time of celebration from which many traditions were established. The public holiday was later abolished under the ‘Anniversary Days Observance Act’ of 1859 which resulted in the gradual decline of the observance of the traditions. So much so that today very few communities uphold the significance of ‘Oak Apple Day’, Membury being the only village in Devon  who still mark the occasion. When searching the Devonshire newspaper archives it is interesting to see that the reports of ‘Oak Apple Day’ do not start appearing until 1877. Whether or not because until then it was not newsworthy or that there was a later resurgence in the observation of the day is a good question?
If you research ‘Oak Apple Day’ you will come across two versions of why the 29th of May is regarded as being so important. One incorrectly states that it commemorates the day that King Charles II hid in that famous Oak Tree which as can be seen above occurred in the September of 1651. Then the correct one avers that it was to mark the arrival of the King in London on May 29th 1660. 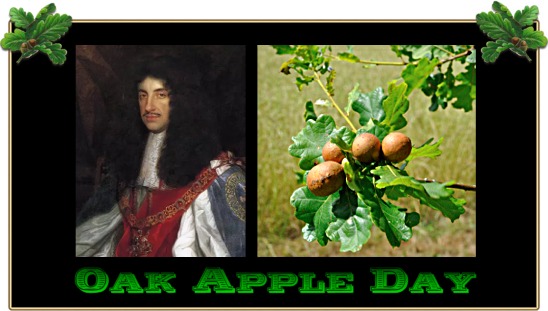 Probably the Dartmoor town of Tavistock used to be the busiest on ‘Oak Apple Day’, also known as ‘Garland Day’. It was the belief that on this day anyone was allowed to cut oak boughs from any tree as long as it was done before six a.m. which clearly did not go down well with the landowners. Therefore it would not have been unusual to have seen gangs of youths setting off at first light in order to harvest the required oak. Having done so they would make oak garlands which consisted on oak twigs etc being made into nests in which  birds eggs would be arranged in the centre. The only exception to this would be any ‘nest’ containing robin eggs would immediately be destroyed. This reflects the belief that to steal eggs or harm a robing was sure to bring bad luck. Having made the garlands the youths would then parade them around the town expecting a small donation for their efforts. In addition many households would decorate their doors and windows with oak boughs and branches. Later in the day some of the menfolk would be classed as ‘Cavaliers’ whilst others being ‘Roundheads’. Then mock battles would take place where the ‘Roundheads’ would attempt to tear down the ‘enemies’ oak decorations, such attempts would be repulsed by means of water fights. This being symbolic of the various struggles of the Civil Wars. Following the abolishment of the public holiday a small couplet of protest became popular around Tavistock which went; “The twenty ninth of May – Is Oak Apple Day – If you don’t give us a holiday – We’ll all run away!”
As mentioned above it was deemed as a mark of respect for moorland folk to wear a sprig of oak leaves along with an Oak Apple (commonly known as Oak Galls). Should anyone fail in this observance then in some places they would be liable for dire actions. At worst there would be a sound beating or in some cases lashes with stinging nettles and at the very least they would be called ‘Chit-Jacks’ a term which also was used to describe ‘Oak Apple Day’ – ‘Chit-Jack Day’. In and around the Moretonhampstead area the term ‘Chit-Jack’ or ‘Shit-zack’ was also used to describe a person who was generally regarded to be mean, dirty or generally disliked as in; “Eee, be a praper ole Shitzack ee be!”
Although not directly associated with Dartmoor there was another slightly sinister Devonshire tradition that was practiced around the Starcross area on ‘Oak Apple Day’. This involved ‘May Babies’ which were little dolls, neatly dressed and laying on a bed of flowers in a coffin shaped box. These would be paraded around for all to admire by the young girls, possibly in hope of a ‘donation’ or two. There is no record as to the origins of this tradition apart from one report of a local doctor coming across a group of woman and children carrying boxes covered with cloths. When he asked to see what was under the covers he was shown a doll laying in a box and was told it was; “me May Baby’, zir.” and an old woman added; “tiz, King Charles beheaded in the oak, zir.”?