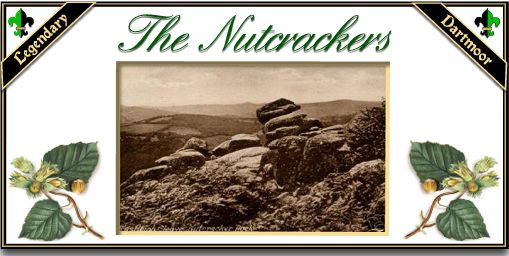 Ever heard the saying, “like using a hammer to crack a nut”? Well you won’t get a much bigger hammer than the ‘Nutcrackers’ and that’s for sure. At one time this must have been one of the finest balanced logan stones on Dartmoor. Basically a logan or logging stone is one that through natural weathering has been left finely balanced on top of another rock. Folklore has held these particular stones in awe since early times and many of them now have personal names – such as the Nutcrackers, the remnants of this magnificent logan stone lie near Sharpitor in Lustleigh Cleave. It does get a bit confusing as their is also a ‘Nutcracker‘ rock on Rippon Tor which is also a logan stone. Apparently ‘Nutcracker’, singular or plural, was quite a common descriptive for logan stones at one time. But the Nutcrackers in Lustleigh Cleave has a sad story to tell so get the tissues ready. In the early 1900’s William Crossing (1990, p.291) briefly mentions that on Sharp Tor there is a logan stone called the Nutcrackers along with several more stones that ‘log’ or rock. The reason why the name Nutcrackers applies is that there were three stones and the motion of one of them caused the other two to ‘log’. There are also two other named rocks; ‘The Sofa’ and the ‘Christening Stone/Font due to the fact in it there is a rock basin.
He is normally correct in what he says so it can be assumed that in the early 1900’s the Nutcrackers ‘logged like a gud ‘un’. Stanbrook (2000 p.8) notes how in 1860 the stone was, “interfered with”, by a gang of navvies who were working on the nearby Moretonhampstead railway line. It seems that they shifted it slightly which had the effect of stopping it logging. But then sometime in 1950 the logan stone was completely dislodged from its pivotal base and sent tumbling down 20ft to a ledge below. It was first reported when a villager looked up to Sharp Tor and noticed, “something was missing,” – yes, a huge gert slab of granite. At the time the finger was pointed firmly at the army who at the time were on manoeuvres nearby but there is another version which the Lustleigh folk kept very quiet. A local farmer’s son was heard to say he did not believe any superstition attached to the Nutcrackers and to prove his point he drove his tractor up to the rocks, attached a chain to the logan and dragged it off its pivot. After his ‘brave’ deed he was heard to boast that he had proven there was no magical powers to the rock and both he and the villagers were happy for the army to take the blame. However, shortly after the act of vandalism the boys family suffered one tragedy after another; one family member suddenly died, another had a serious tractor accident along with every other disaster a farming family could face. In the end they moved far away to be rid of the curse and never to be heard of again. The verdict of the Lustleigh folk was; “should have left the rock well alone, deserved all he got.” Alternatively a report in the Devon and Exeter Gazette dated the 19th of May 1950 contained a comment by Mrs Cook who lived of all places at Nutcracker Cottage, Lustleigh. She said that on the previous Saturday she met two men with crowbars who told her that they were on their way to push over a boulder. Before she reached her cottage Mrs Cook heard a loud crash which she suggests was the nutcrackers being toppled over.
The Times newspaper reports on the 11th of May that a parish meeting was to be held to decide what to do. The problem was that the rock weighed around 10 tons and so restoring it was going to be a problem. It was also suggested that the reason for the rocks downfall was some young men and a few crowbars. The outcome of the meeting was that it was decided to ask the military for their help in restoring the rock which sound s very sensible.
On the 20th of June it was reported that the Coast Artillery School at Plymouth dispatched 40 soldiers to the cleave with some heavy lifting gear. The mission even had a name – ‘Operation Nutcracker’ and was lead by Capt. W. Juniper. Sadly the gear was not heavy enough and their mission failed horribly, mind you they were trying to hand-winch the thing.  What happened was, after spending an estimated 1,200 man-hours on the project the officer-in-charge, Major E. H. Graham had the ‘pleasure’ of watching the stone tumble one hundred feet down the hillside. It was reported at the time that when the logan hit ground zero there was a cloud of sulphurous fumes which spat lumps of rock everywhere. Maybe this was some sign that the Devil was at work. But the failure of Operation Nutcracker was positively assessed by Major Graham as being a, “first class experience for the men,” – top ho! or maybe ‘topple ho’. So after six days of broken ropes and other disasters Operation Nutcracker was ended on the 19th of June.

But the whole event caught both local and national imaginations and during the rescue work there was a steady flow of news reporters, sight-seers, and locals through the village and cleave giving business an excellent boost. But the good old military were not to be beaten and on August the 12th the Times recorded that Southern Command H.Q. had offered to send a squad of Royal Engineers to put another rock where the Nutcracker once stood. The parish council were to consider the offer? at which point The Times lost interest in the story and n’er a word was heard about the Nutcracker again.
Sadly to this day the logan stone lies beneath its one-time thrown and has even had the indignity of having had the name taken away and given to the hill and a nearby dwelling. So today the Nutcrackers is the eminence on which the logan once stood and surveyed the cleave of Lustleigh. It also means that the folk of Lustleigh have to look to other ways of cracking their nuts … painful, but it does save a long walk!
As with any good story there is always a twist and this one is no exception. When the Nutcrackers was first toppled there was an element of local dissent insomuch as some of the villagers of Lustleigh said it was another stone the ‘Christening Stone’ that had been vandalised. One villager, Mrs Mary Smale was so sure of this she took some hazel nuts to what she regarded as the Nutcrackers and successfully cracked them under the logan stone The old postcard below shows both stones before the damage and if local tradition is right then the Christening Stone copped it. 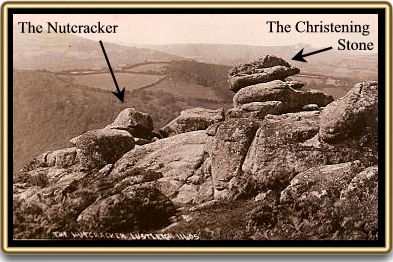 It appears that the Christening Stone stood next to the Nutcrackers, hence the confusion, but regardless of the local advice Operation Nutcracker continued to its disastrous conclusion, Stanbrook (pp. 8 – 10). So maybe or maybe not – Nutcrackers or Notcrackers?