Before the advent of the railways and motorised vehicles the soundscape of Dartmoor would have been much different especially on market and fair days. Then the air would be alive with the sounds of cattle lowing, the bleating of sheep and at times the whinnying of ponies as they were moved along the highways and byways of the moor. On passing the fields and enclosures one would have heard the sound of grazing sheep frantically tearing mouthfuls of grass and when the lambs were at foot they would be bleating for their mothers. On the old trans-moor packhorse routes the sounds of pony trains clip-clopping across the stony paths would resonate across the moor. In all these cases there would be an additional sound – that of crotal bells gently tinkling as the animals approached. In 1884 someone wrote the following; “Looking back we saw dear old Tavistock so cosily settled down among the hills and looking so peaceful. But the bracing air and the golden heather and the tinkling of the sheep bell and the broad expanse of moor spreading out before us, tor after tor rising up as we drove along the common produced feelings we shall not forget.”
Crotal Bells had many purposes and probably the most important one being that they signalled the approach of on-coming livestock. Just imagine herding your flock of sheep or herd of cattle along one of Dartmoor’s narrow lanes with their high banks. Then without warning you round a bend and are confronted with another flock or herd coming in the opposite direction, they meet each other head on and become mixed up – confusion reigns. But should some of those animals have crotal bells hanging around their necks you would have heard their approach and the need to take some action – similar to today when one sounds their car horn when approaching a bling bend on a narrow lane. The same would apply to trains of pack horses loaded with bulky and heady crooks. Crotal bells would also be fixed to wagons, carts and carriages again to signal the fact of the oncoming approach of traffic which would hopefully give the waggoner time to pull in to some convenient spot. When driving down the narrow Dartmoor lanes and coming across a pull-in I often wonder how old these passing places are, have they been there only since the advent of modern vehicles or do they date back much further?
The word crotal come from the Greek word – crotalon – which basically means rattle which admirably describes them, they are also sometimes known as ‘rumbler bells’. The name is pretty generic and can be applied to a variety of bells and their uses. The evolution of these bells spans a massive time period with early examples dating back millennia. The early types were made by various foundries and were cast in two halves, a ‘pea’ or metal pellet would have been inserted and then the two halves crimped or soldered together. Later models were cast in one complete unit but both styles had two important components – holes or a slit for emitting the sound and a loop for fastening to collars, harnesses, wagons etc. In the main the later ones were made from copper alloy, tin or pewter. Some would have been decorated with ornate patterns or founders marks whilst others would have been completely plain. There is an excellent web-page covering the types of crotal bells and their manufacture which can be found – Here.
As far as the agricultural context goes as noted above they were used to alert travellers of the approach of herds, flocks and trains. Also in the case of sheep the sound of the bells would have been useful in enabling shepherds to locate their flocks, especially in times of fog and snow or alert him to some possible threat to the flock should they be frantically ringing. Some say that some shepherds working in lonely remote places used them as a comfort thing?  The bells would have normally been attached to the sheep that were known for wandering or were dominant rams  (bellwethers), that way the rest of the flock would normally follow. It also could be said that the bells acted as some kind calming influence on the sheep, one early sixteenth author wrote, “that shepherds think that the flock are pleased with the sound of the bell, as they are by the flute, and that they grow fat in consequence.” 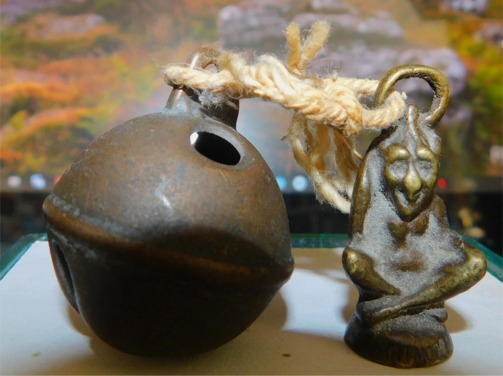 There were a few superstitions attached to crotal bells, the most common being that they protected the livestock from the evils of witchcraft and the piskies. I have in my possession an old crotal bell that actually has a small brass piskie figure tied to it (see above). This came from an old byre and was clearly placed there as a talisman against some kind of malevolent force. For whatever the reason for placing it in the byre it does suggest that at some time the farmer held some superstitious beliefs that someone or something needed protection? You can see from the patina on both the bell and the figurine that they are fairly old as is the string tying them together. The bell itself is in fairly good condition although there are signs of wear on the top of the loop. The ‘pea’ is still inside and when rang makes a clearly audible sound that would have been heard for quite a distance. You can just about see see the slit running around the base of the bell which emits the sound as well as the two circular holes in the top, it is said that these circular holes would also allow for replacement ‘peas’ to be inserted. The weld/solder is also visible running around the centre of the bell where the two halves were joined together.
With regards to the piskie, such figureens are hard to date but the word ‘Pixie‘ is just readable around its base. I would suggest that this fact that there is a circular loop at the top of the figure would mean that it was meant to be worn as a pendant of some kind. Additionally all of the later pixie figurines are never depicted in a cross-legged posture which may well date it to around the early 1900s? The fact that the piskie is attached to the bell would also indicate that this too was thought to provide some sort of protection. Occasionally a crotal bell would have been given to a bride and groom on their wedding day as it was meant to bring good luck to the marriage as well as providing protection from ill fortune.