Although this report, written by an officer attending the military camp on Whitchurch Down in 1909, is rather rambling and very much tongue in cheek it does give some good insights into camp life. There are several references to ‘myrrh and borax’ which at the time was an ingredient for tooth powders and in tincture form a mouthwash. Clearly in this case it had an alternative prescription.

“It’s almost stopped raining,” writes John Saville Judd, an officer from the Devons was cheerful about the prospect. “It will be fine today,” he said, looking wisely in the direction of Pew Tor. “I ought to know, for I’ve lived on the moors for eleven years, and I have observed that when the clouds roll upwards on the left side of it, looking from here, before 8 o’clock it is a sure sign of perfect weather.” It is raining still. I hope that he did not live on the moor for pleasure. I hope he had had to live on the moor during the King’s pleasure. If any body told me that he had been sentenced to solitary confinement, and was carrying out his term in this camp, I should believe it, for it is impossible to get outside one’s tent without getting soaked. Myrrh and Borax is a good thing if one feels sore from the middle of one’s chest to the bald patch. I keep on sipping. It is rumoured that a child has been born with webbed feet in Tavistock. People shaking hands in this part of the world, say, “Give us your fin.” As my battalion marched into camp a cheerful civilian called out to us, “Good old Dreadnoughts!” He must have meant submarines. Tents always leak a little at first. I left a kit bag open, too. There are a thousand more men in camp this year than last. Poor chaps, and – Well done, ‘Haldane’. If it were only to be fine again, a place like this ought to be a success. IF? And my Cornishmen have got new uniforms too; scarlet with white facings. They are only allowed to wear them when walking out. They have not worn them yet. Walking, not wading. They have enough buck still to try to be arrogant in moist khaki. When they hear the band playing Trelawney – “Will cross the Tamar, land to land; The Severn is no stay.” I believe they think they are doing it.
The salute is going to be changed to the side stroke Bicyclists will, on passing an officer, tread water. Anybody may make jokes about the dry canteen and the brigade signalling officer does not care for any mention of heliographing to the Marines at Plymouth. Tavistock have challenged the brigade to a cricket match. As one of the men said, “Tis one of they games what’ll never be finished.”
Everybody who has a lecture to give is giving it. I am too hoarse, but Moore and Burgess – I mean myrrh and borax – is doing wonders. Yesterday a major came from Plymouth to lecture the officers, and just when I got my notebook out he said that what he had to say was strictly secret and confidential, and that it would not do if anything got into the Press. So I cannot write about it Last time I wrote about soldiering I made up a scheme, and got into a row for giving away a Government secret. One has to be careful. I believe that if the London Scottish had not won the Marathon race they would have blamed me because I said at Whitsun that I thought they would win. I suppose that I ought not to write at all about military matters – just sit and sip myrrh and borax…
But now we are the 5th battalion of a regiment, and a regiment that I cannot but think is beginning to feel pleased we belong. We certainly are triers. We do not mind how wet we get. At least not much. Only five percent of the men have stayed away, and they cannot swim. I’m afraid that we do not know enough about the glorious record of our regiment as we should. We do not even know the 4th battalion very well. But then they live underground most of the year – being miners. They are called “Wants,” which is Cornish for moles. It seems an awful shame that they should not have an opportunity of seeing the sun. On the other hand they do not blink in this grey light, like they did last year.
I am now being interrupted. Some signallers have come to know what they shall do and it is raining. I recommend myrrh and borax… The recruits had been firing at the new art-shaded targets called by some the Salome targets. They scored nothing till the jumping jimmy or canary was hit. “Which target are you aiming at?” asked an astonished range officer. “I’m not aiming at any target like,” answered the recruit. “I didn’t know as ‘ow there was any.” The Solano targets were pointed out to him. “Well, ’tis more sport like than the old bull’s-eyes,” the recruit remarked. The party went on firing but nobody hit anything. There was registered just one solitary fluke. At two hundred yards even they got no nearer making a score, and the officer said, “Fix bayonets; your only chance is to charge.” This reminds me that there is a remarkable boy-shot in this battalion. The first time he fired at the range he scored a possible, and has often, this his first year, repeated the feat. 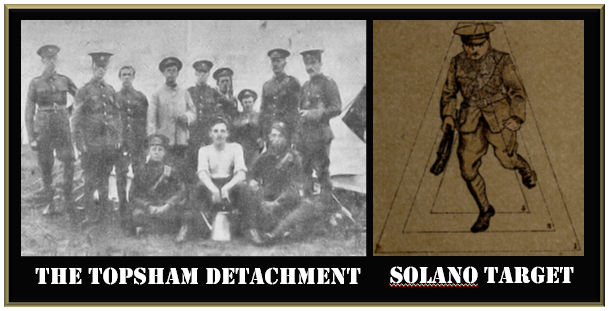 The men have begun singing in their tents. They all appear to be members of the Y.M.C.A. (that has a tent here), and very fond of of their homes, but diffident of starting for them in the dark. Some are seemingly Shakespearean and apostrophise Antonio. Last night I heard the angel voices of a drum and fife band calling “Poor old Joe.” the bugler boys have really provided me with the best stories. one about fourteen years old – the bugler boy not the story – came and inquired if he was entitled to a separation allowance. Another of the same ‘not allowed to purchase cigarettes sort of age’ did not seem able to sound the bugle call although the battalion was getting soaked. He spluttered and blew, but no sound came, and at last the truth was obtained from him. “Please sir, I’ve been an’ blowed my quid of baccy down the mouthpiece of my bugle.”
But I must stop writing now – to bale out. I see that one of the tents has dragged anchor, and is sailing across the Battalion parade ground. I may be able to get top the mess tent in an hour or two. If not, I shall probably begin another article.” – The Devon & Exeter Gazette, August 6th, 1909.