The splendid old oak tree still stands on the village green as it has stood for centuries. In 1834 messers G and J Hearder wrote the following:

“Immediately in front of the church-yard wall is the gigantic Meavy Oak. This venerable tree, though it has suffered from the touch of age, still continues proudly magnificent. It is of an extraordinary circumference, and is completely hollowed out by the slow but never-failing operations of time. The cavity, as is affirmed by mine hostess of the “Royal Oak,” a little inn standing hard by, once accommodated nine persons at a dinner party: it is now used as a turf house. The lower branches still obey the voice of spring, and spread their living canopy over a large area of ground. The topmost boughs, however, are bare, having long ceased to be hung with the massive foliage which they bore in the days of their young lustihood...”

“The Meavy Oak is referred to in deeds almost to the conquest, and that it was a sacred tree to which certain amount of reverence was given is probable enough. The cross was set up under its shadow to consecrate it and probably put an end to superstitious rites done there. Anyhow this tree till within this century (1800’s) was, on the village festival, surrounded with poles, a platform was erected above the tree, the top of which was kept clipped flat like a table, and a set of stairs erected, by means of which the platform could be reached. On the top a table and chairs were set and feasting took place. Whether dancing I cannot say, but in all probability in former generations there was dancing there as well as feeding and drinking. These threes where dancing took place are precisely the Maypole in a primitive form.”

Hemery also notes that in a book held at the Bodleian Library in Oxford there are claims that “the Royal Oak at Meavy, Devon was traditionally said to be known to King John and his followers in the chase”. The oak is also said to be the fourth largest oak tree in Devon. It is a fact that it was at one time used as a peat store but by the publican of the nearby Royal Oak inn. There are also modern day stories of people riding their bikes through the gap in the trunk. It is also possible that the tree was a gospel oak where early preachers would come and conduct services under the shelter of its branches. It is clear that the village cross which is probably fifteenth century, was sited under its shade and it too may have been a preaching cross. Another tradition at Meavy is the annual Oak Fair, this dates back many years and has been held on the green by the old oak tree. There is also a tradition that this oak was one of the many that King Charles was said to have hidden in, hence the name Royal Oak. 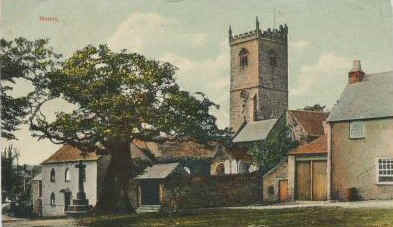 Although the mighty oak has battled on down through the centuries 2019 was a crisis point. A tree survey was taken in the January of 2019 and reported that it was in a; “very advanced stage of decline and if left untouched would prove a major safety risk to people or cars parked near to the tree.” It was recommended that prompt works be carried out before mid-March. It was suggested that two large secondary branches be reduced and to lighten the overhead canopy. This action would then reduce the weight which the hollow and decayed main trunk had to bear. In addition it was suggested that the thick cloak of ivy be removed and possibly to add further support props.

The main mining concern in the Meavy area during the 1830’s was the Yennadon Iron Mine Here the ore was both open cast mined and dug for the ground. The main lode at the surface was about 4m wide and went down to a similar depth. The main adit is said to have been 60 fathoms deep (120m). There were also tin mines at Brisworthy Burrows and Greenwell Gert, Hemery pp 117 -119.