There was a time long, long ago when giants lived on Dartmoor. They tended to dwell on the high tors where they could sit and watch over their territories. From a lot of the lofty peaks they could even see across into Wales and down to the South Devon coast. This meant they soon knew if any raiding parties were coming long before they actually landed on Devon soil.
One of these giants was called Maximajor and he lived high up on Mardon Down. From here he could overlook the Teign valley and all the small moorland farms. Maximajor had a way with cattle it was as if they could understand anything he said. If any of the farmers had a wayward bullock they would always take it up to Mardon to see if the giant could make any sense of them, he was like a modern day ‘bullock whisperer’. All he asked of the moorfolk was that once a week they brought him six ewes so he could make his favourite lamb stew which he ate every day. Which considering the havoc he could wreak was a small price to pay for a peaceful life.
One stormy day a couple of locals were driving up the weekly meat delivery when upon arriving on Mardon found the old giant as dead as a dormouse. They quickly rushed back and summoned all their neighbours and returned to Mardon. The big question was where to bury the giant, clearly they could not or did not wish to haul his body back down to Moretonhampstead so it was decided to bury him on the highest point of the down where from his grave he could still look down on the land he loved. Shovels and cider were summoned and the folk began to dig a huge grave. It was hard thirsty work and the cider did not last too long, eventually the hole was deep enough to lay the giant in. With one final effort they dragged his body over to the grave and rolled it in. He hit the bottom with a mighty thud, it shook the trees and rocks all along the river Teign. The hole was backfilled and a huge pile of rocks was placed over the tomb as a fitting memorial. Every now and again the locals would wander up to the grave to make sure nobody had disturbed it.
What they soon began to notice was that there would always be a heard of cattle collected around the grave, it was as if they were missing the old giant and were waiting for his return. As it happened they did not have to wait long for one dark night the old giant pushed away the rocks that covered his grave and climbed out of the hole. To this day, nobody is sure why he came back to the lands of the mortals and the moorfolk never completely worked out what happened to him but the next day they found the opened grave, some huge footprints in the peat leading across the down to a huge standing stone. The amazing thing was that nobody had ever seen the menhir before, it just appeared overnight. Those in the know say that Maximajor rose from the dead and started to wander the Down when some magical spell, cast by whom nobody was sure, turned him into the granite pillar.
Either way he was never heard of or seen again, all that remained was an empty grave and the menhir. From that day on the huge cairn on the down was known as the Giant’s Grave and the Menhir as the Maximajor Stone. Later the Christian folk of the moor renamed the stone ‘the Headless Cross’, this was probably to stop any un-Christian stories of giants rising from the dead, after all as far as they were concerned there was only room for one person to rise from the dead. To this day you will often see cattle gathered around the stone and if you are really lucky you may see them affectionately rubbing their heads up against the petrified giant. 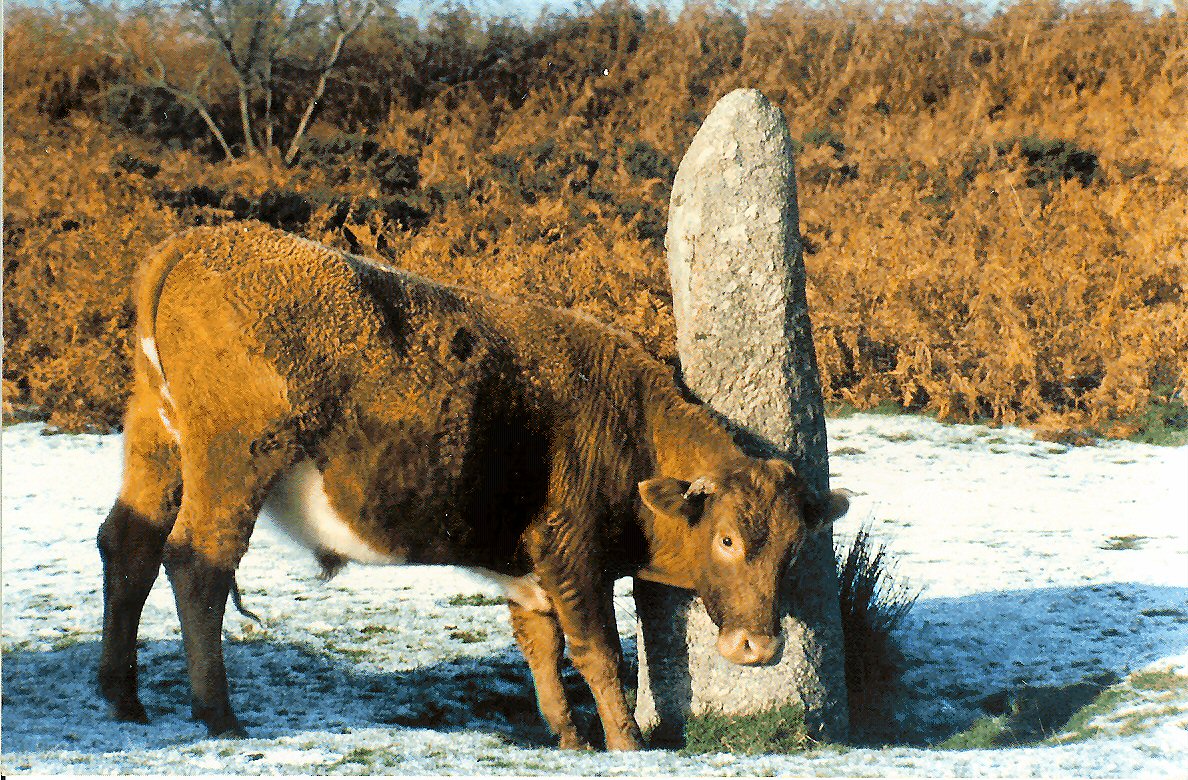 Bullock at the Maximajor Stone.

Both the ‘Giants Grave’ and the ‘Headless Cross’ are marked on the 1:25,000 Ordnance Survey map. The highest point of the down stands at 1,165ft (355m) where a cairn cluster can be found. There are many ritualistic features on the down which may point to it being a small Bronze Age ceremonial site as can be seen from the plan below.

Jeremy Butler, 1997 pp.147-154 describes the Mardon Down complex as sitting on a gorse and bracken covered ridge stretching along the 350m contour line. The whole area seems never have been subject to agricultural improvements which is probably why some much remains today. The site has an extensive view of East Devon and provides the only level ground in the area. The main feature is the stone circle which considering its location is unusually prominent for a Dartmoor stone circle. With a diameter of 38m this is also the largest of the stone circles to be found on the moor. It is estimated that originally the circle would have contained about 61 stones. Today only six stones are left standing with a further 16 that have fallen radially and lie roughly where they would have stood.

Along with the stone circle are a variety of associated cairns that seem to be aligned though disregarding the circle. There is a possibility that in 1797, Polwhele may have made reference to one of these cairns in so much that ashes, burnt wood and pieces of earthen vessels were found. It is certain that cairn(1) has indeed been rifled and there is possible evidence of a displaced kistvaen (cist) cover which would have been the object of any excavation. Butler postulates that this feature must have been a prominent dome shaped structure.

North of the circle lies ring cairn(2) this measures about 20m across and is probably associated with the Giant’s Grave. It is also noted that normally on Dartmoor, stone circles are not connected with ring cairns, hence the reason for the Giant’s Grave association.

Moving northwards again, the next two features are cairns 3 and 4. Cairn(3) measures 10 x 0.8m and has the appearance of a flat topped mound. There are also traces of an outer ring which still retains much of its shape. Cairn(4) is slightly bigger and measures 20 x 0.7m and it is this cairn that is known as the ‘Giant’s Grave’. This feature survives as “much spread mound”. The last feature is cairn(5) and this one has a double ring of stones, an inner circle of pillars and an outer kerb circle of slabs set on end. The cairn again shows signs of being robbed. All the cairns when compared to others on the moor indicate a localised nature of cairn design. There are no certain records of any excavations at Mardon Down but if Polwhele was correct then the discovery of charcoal would be in keeping with the finds at excavated cairn sites. This could possibly indicate that large fires were used in the rituals carried out at these sites, possible with a connection to the winter solstice. It has been recorded that as late as the twelfth century Bishop Iscanus was trying to suppress pagan fire festivals that were held at the winter solstice.

As far as the ‘Headless Cross’ is concerned, Gerrard, 1997, p.63 considers that this is a menhir or standing stone and that it may have been re-used or re-named for Christian purposes. There are no visible signs of this stone ever having had a cruciform shape so it can be dismissed that any head or arms have been lost. Strangely enough there are no incised crosses on the stone either so the stone is a ‘cross’ in name only. Sandles, 1997 p.66 states that the present stone stands at 1.69 metres and at the widest point has a circumference of 1.195m. He also points out that the present stone is in fact a replica that was erected by the Dartmoor National Park in 1992. This was because some vandals drove a car into the stone and set it alight. The resultant heat broke the stone into three pieces thus rendering it irreparable.