Mary Ann – the last witch of Dean Prior. – This story was related by the Reverend C. J. Perry Keene who was the vicar at Dean Prior between 1879 and 1926. Coming from a man of the cloth there should be no doubting the tale as it was told to him by one of his local parishioners. It clearly demonstrates how deeply the witch superstitions ran in this small community on the very edge of Dartmoor not that very long ago. In his own words he commented that; “The old faith in the existence of fairies, fauns and dryads is no longer found in our villages, but the superstitious dread of witches and the belief in the power of the evil eye dies hard.”

It was ‘Old Mary’ who was celebrating her eightieth birthday when the vicar called to congratulate her on reaching such a stately age. Having remarked how fit and well she was looking the old dame thanked him but also remarked how much better she was now she had moved away from Churchtown and the proximity to him and “the old witch.” Ignoring as to why she felt better for distancing herself from him for fear of her reply he then enquired about the old witch.
For most of her adult life Mary Ann was renown as being someone you never wanted to cross, nobody ever actually dared say why but they all knew she had dark and sinister powers. Even the hardened moormen who were well acquainted with the happenings of the world took extra care when dealing with the woman. If ever any deed met with her disapproval then swift and dire consequences usually followed. Granted there was never any actual proof that she was the cause of any mishap or ill fortune but that made no odds, she was at the root of all evil. There was even the incident of the reverend’s two milk cows that suddenly died, all the local folk were of the opinion that somehow Reverend Perry Keene had transgressed in her eyes and as a result she ill-wisht his animals. Apologies for spoiling this tale at this point but in all truth the vicar’s cows died whilst calving due to milk fever, a common occurrence attributed to the lack of calcium prior to giving birth. Anyway back to Mary Ann’s powers with the black arts and how ‘Old Mary’ managed to be on the receiving end of the witch’s’ retribution. One thing that ‘Old Mary’ was famed for was the breeding of pigs, she always insisted on using the local ‘Large Black’ breed, famous for its gigantic size, lop ears, the ability to produce fine healthy litters and succulent tasty meat. On one occasion her favourite sow had given birth to the best litter of piglets she had ever seen which was saying a lot. A few days later whilst she was cleaning out the sty Mary Ann appeared in the courtyard carrying an empty bucket. ‘Old Mary’s’ first instinct was to creep down low under the sty wall in the hope she had not been spotted. However all was in vain as the woman’s ever seeing eye soon spotted her. Eyeing the prize litter with envy Mary Ann shook the empty pale and demanded to borrow, “a bit o’ meal vur me zwine.” Anxious to be shot of the woman ‘Old Mary’ hastily filled the bucket, made some excuse and scuttled off into the sanctuary of her cottage. A few weeks later ‘Old Mary’ suddenly remembered that Mary Ann had not returned the meal she had borrowed. So, despite the possible consequences up to Church Town she defiantly strode, empty bucket in hand. It did not take long to reach her destination, a tumbled down hovel with a black moss covered thatch. Striding confidentally up the weed covered path she hammered on the door. Loud cursing from within was followed by the rickety wooden door being flung open and there loomed Mary Ann. Not to be daunted by this apparition ‘Old Mary’ politely reminded the woman that she had borrowed some meal and possibly somehow forgot to return the favour. Immediately a tirade of curses and oaths spewed forth from those pallid narrow lips and pointing a grimy finger Mary Ann hissed that she would live to regret this day, with that the door was slammed shut. It was then suddenly opened again, a gnarly hand snatched the bucket and after a short pause was thrust back again containing some brown pellets. 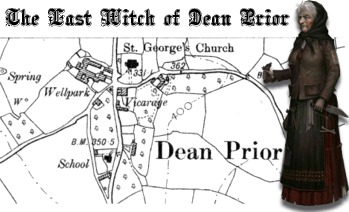 Discretion being the better part of valour ‘Old Mary’ retreated to the safety of her own cottage, quietly proud of herself in having her meal returned. Later that day she took the meal, poured it into the trough and smiled as the prize litter of piglets clambered over each other for their evening feed. No sooner had the first mouthfuls been greedily devoured than the whole litter ran squealing and screeching around the sty, some even tried scrambling up the old granite walls. Just as suddenly had the commotion began than a deathly silence fell over the sty and on peering in ‘Old Mary, saw, much to her anguish each and every piglet laying stone cold dead on the floor. At that moment she knew only too well the witches words, “you’m live tu regret this day,” foretold. That spiteful old crone had cursed her and whatever potion was in that meal had executed her piglets. Immediately she went for the vicar (not Reverend Perry Keene but his predecessor) to show him what evil forces were at work amongst his flock. Being a God-fearing man the vicar had no time for such superstitious nonsense and calmly stated that in all eventuality the piglets had died from some unrelated disease. He also implored her not to spread such rumours for fear of sensationalising the unfounded reputation of Mary Ann and the ungodly reputation surrounding her.
‘Old Mary’ was having none of that and so the next day she travelled up to Exeter to consult a famous ‘white witch’ who resided there. He was a true believer in the black arts and his sagely advise was to return home and to roast one of the dead piglets. Then the next person to knock on her door was the guilty party who had conjured the evil spell. He then added that once the culprit had made themselves known to cut the heart out of the roasted piglet, tightly tie some cord around and then hang it up the chimney. Off ‘Old Mary’ scuttled back to Dean Prior and on arrival immediately the biggest carcass, stoked the oven with plenty of furze bundles and when it was blazing put the piglet on the roasting spit. Then with a steaming mug of ‘tay’ she sat on the old wooden settle and awaited the expected knock on the door. No sooner had the first aromatic wafts of roasting pig wafted up the chimney than a knock came on her door. Deep down she knew who exactly would be waiting there and sure enough there stood Mary Ann. ‘Quod erat demonstrandum’  – just as the white witch had promised the perpetrator of her litter’s massacre and the purveyor of evil spells. So without hesitation she slammed the door firmly shut and triumphantly ventured over to the chimney breast.
You make think this story is at an end but it’s ‘not over yet’. The white witch from extra had given ‘Old Mary’ some further instructions – that once the evil doer had made themselves known to remove the heart and to slowly begin to tighten the cord. So now knowing Mary Ann was the one ill-wishting her she took down the heart and began to slowly tighten the cord. She strolled to the door gradually pulling the tension and on opening she saw Mary Ann writhing around the floor clutching her chest. As the tension on the cord increased so did the throws of agony along with screams and screeches, tighter and tighter ‘Old Mary’ pulled, the howls turned to pleas for mercy and sobbing. “You’m be a killin’ I,” the witch wailed, “I do a promis to ‘arm ee no mor,” she shrieked. It was only when ‘Old Mary’ was convinced Mary Ann truly meant her words and that she had suffered enough pain to compensate for the loss of her piglets that the cord was loosened. From that day henceforth ‘Old Mary’ lived a peaceful life, bred numerous litters of Large Black pigs and more importantly never heard from the ‘last witch of Dean Prior’ again. And those words came from the very pen of a man of the cloth who had no reason to record them if they were not true.