The ancient cross which stands in Manaton Churchyard has an interesting history, it was once the tradition to carry a coffin around the cross three times before entering the church. In the 1650s the then incumbent parson regarded this as a pagan tradition and tried to persuade his congregation to cease such heathen practices – all to no avail. Finally he took matters into his own hands and did the job himself. Here is an old verse which relates the story.

At Manaton Church, ’tis sad to disclose,
Some of the saints are lacking a nose;
And some have other disfiguring traces,
Marring the symmetry of their faces.

For a perfect saint was a thing abhorred
In the sixteen-fiftieth year of the Lord;
And the Parson who then took tithe and toll
Was a man of a very sensitive soul.

Cropped close to his head he wore his hair,
And his eyeballs rolled in a dolorous stare;
And craven things of timber and stone
Are a mark of the beast, he said with a groan.

Now, out in the churchyard an old cross stood,
Of immemorial sanctitude;
And with reverence passing from sire to son,
The folk did that which their fathers had done. 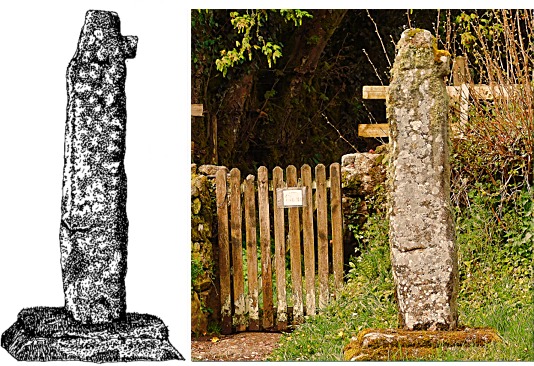 When each was borne to his last long bed
Thrice round the cross the bearers would tread;
But the Parson exclaimed with stern decision,
“The thing is a damnable superstition.”

He preached against again and again,
Dusting the pulpit with might and with main;
He thundered with fury “The cross must go!”
The people marvelling answered “NO!”

“Tha cross bain’t duin’ no harm to yu,
Zo let’n alone gude pass’n, du!”
But the Parson got up in the dead of the night
And went to the cross with a lantern’s light.

Little by little the cross he broke,
With a text of scripture for every stroke;
And the friends of the Moor came near
To watch the task with scoff and jeer.

So he shattered the cross into pieces small,
But nobody knows what he did with them all;
And when the folk passed in the day dawn fair
They looked for the cross but it was not there.

And the Parson said when they came to ask,
“The hand of the Lord hath accomplished the task“;
But the people said, “Sure as eggs be eggs,
That pass’n ath done it isself I’ fegs!”

“Aw ‘ess we properly understand –
The ‘and o’ the Lord be ‘es own right hand;”
And that is how the cross has gone
From the old churchyard at Manaton.