Lustleigh – some will say it’s the prettiest village in Devon, renown for it’s old buildings, its May Fair, the venerable  St. Johns Church, the Old Cleave Inn and the nearby Lustleigh Cleave. What could sound more idyllic with its close-knit community always ready to welcome visitors with the warmest of hospitality. Back in 1862 the extent of their hospitality was brought into question when the Western Times reported several cases which appeared before the Moretonhampstead petty Sessions under the headline of “The Dodd Family” and “Lustleigh Manners.”

On the 2nd of May 1865 the first report appeared in the Western Times regarding the cases heard at the Moretonhampstead Petty Session – “THE DODD FAMILY – Charles Dodd and William Dodd were charged with assaulting Frederick Pollard, a mason of Lustleigh on the 14th of April. The defendants were at the Half Way House. The complainant came up with friends, when Charles Dodd assaulted him in a most brutal manner, stating he was paying him off for old scores: brother William “aided and abetted.” Brother William was let off for a couple of shillings, the cost of the summons; but Charles who had a whole host of records filed against him for other assaults, was fined 5s. and expenses totalling £1. 14s. 6d. which everybody thought a very light punishment; and on the application of his advocate, Mr. Troy, who had patiently and skilfully defended him, he was allowed a fortnight’s time to pay the money.”

A report further appeared in the Western Times on the 5th of May 1865, it read: “LUSTLEIGH MANNERS – if there’s any place on earth where one would have thought to find peaceful manners and blessed habits of contentment, Lustleigh Cleave is certainly that place; the constant reader will figure to himself the astonishment of the lieges when the brothers Dodd – natives of that peaceful vale and to the manor born – were brought before this Moreton Bench charged with the violent assaults committed of all days in the calendar, on Good Friday last. Though brothers in the flesh they were however, not brothers in the spirit for the gripe of justice knowingly relapsed its hold on one, adjudging him to have committed an offence worthy only of the modest fine of two shillings, in nomine expensarum as they say in the Ecclesiastical Court; the other brother if not the hero of a hundred fights seemed to have been the bully of many a rustic brawl. According to the complainants statement, he was approaching the Half Way House, on Good Friday for the honest satisfaction of his necessary wants and due refection of body, when Dodd, who was drunk inside, seeing him approaching, suddenly sprang from his seat, rushed at him, pummelled him without provocation, then given, but in memory of an ancient grievance. Mr. Troy, of Exeter, defended the hero with so much success that though his character for pugnacity was too well established in the records of the Petty Sessions the Bench moved by the advocate, adjudged Bully Dodd to a fine of 5s. only and gave him a fortnight to pay it in – there being a modest addendum of so much costs as made a total of £1 14s. 6d.”

It might also be added that at the same Petty Sessions Richard Escott and Samuel Mann, labourers of Lustleigh were charged with being drunk and disorderly outside the parish church during the divine service for which they got seven days imprisonment. Additionally Thomas Brown, a beer-house keeper at Lustleigh was charged will allowing drunkenness and disorderly conduct at his house on the 15th of April and also keeping a house open on Good Friday. So it would be fair to say that anyone reading the Western Times on those days could quite rightly come to the conclusion that Lustleigh was a place better avoided at all costs. 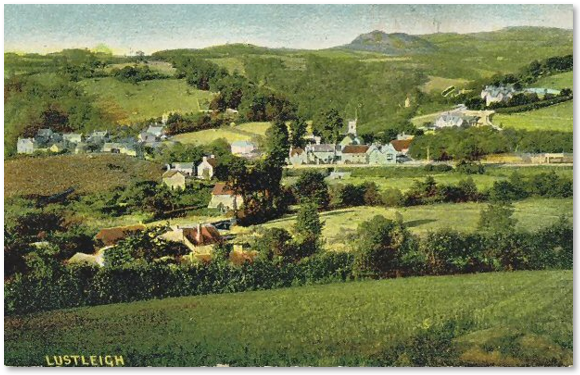 It sounds that at that time Lustleigh had its own Director of Tourism who took up the baton and for sake of damage limitation wrote a letter to the Western Times and whose comments were  published on the 19th of May 1865. “Justice to Lustleigh – A constant subscriber filled with “astonishment and dismay” at the slander upon Lustleigh’s manners he has read of, sends to say that having visited the famous Cleave more than once he is able to answer for the hospitality and honourable name of the people, whose dwelling is near that romantic valley.  Grand country for a visit he tells us, where if you mind your eye you will get civil entertainment for your money, and strangest of scenes for your view. The Cleave is one of those rough romantic valleys where nature is free to follow the bent of her own sweet fancies; a valley which has come down to us rude and untouched from the beginning of time, and so excluded that were it not for the rocks – the granite sentries – which serve the traveller as a land mark, there would be difficulty in finding it. These conspicuous objects roughen the hillside which bound it, and at the summit of the ridge hang crags so fancifully shaped as to have acquired fancy names from the people. One big mass covered with ivy has been called the “Raven’s Tower,” because these blacked winged croakers make their nests in its clefts. Another, the favourite retreat of Reynard is distinguished as the “Fox’s Yard.” The channel of the stream is filled with masses of granite, and the water murmurs along its tortuous way as it were underground, the stones are called the “Horsham Steps,” being crossed by a foot path. Simon Stiles, who has lived there all his days never stops to wonder at them, but strangers are never tired at gazing on the stony chaos. An old wood climbs the acclivity of a hill rising from the stream, among weed-grown rocks making altogether a scene as beautiful as it is curious. Strange to say salmon find their was up the “Steps;” and “Bovey Brook.” the name of this limpid stream is notable for its trout. The Cleave hath its logan-stone called the “Nutcrackers,” not easy to find, but there on the granite ridge to the left it is – a small rock about five feet in length resting on a sort of keel so that a push rolls it from side to side. Three valleys meet here and from the most elevated points the view is delightful as well as unique, with Bovey Heathfield to the south, the fantastic rocks and moors of Heytor and Hound Tor on the west, and the church of Manaton just peeping over the boundary of the Cleave.
That any of the properest manners should be found here a constant subscriber won’t hear of, though the victualling department, at his own visit, much needed improvement; for, not having the faculty of turning the stones into bread, the party had to go all the way to Bovey before they could their bellies fill. This may serve as a hint to intending adventurers to carry a well filled scrip, a hungry stomach having a queer tendency to withdraw attention from the most striking scenes and greatly distorting the lines of beauty.”

I think even I might have been persuaded to ignore the reports of drunkenness and pugilistic outbursts and to experience the many beautiful facets of Lustleigh Cleave whilst remembering to take a full lunch box with me.