Locked Up and Helpless

Being incarcerated in any prison must instil a feeling of helplessness in any prisoner, but imagine what that emotion must feel like in times of a national crisis? Currently the world is fighting its way through the Covid 19 pandemic and any locked away must wish they could be with their families and loved one during this time. They are unable to help, comfort or protect those on the outside. On a much greater global scale were the two World Wars and again the feelings of frustration at not being able to support the war efforts fell heavy on some of the convicts. What follows is an account given by a convict who was serving time at Dartmoor Prison at the onset of World War One. I make no excuse for quoting him verbatim as his words describe the feelings described above and come from someone who lived through those times.

“It is nearing evening on the saddest days as I write these confessions, and vivid and poignant memories are crowding back upon me. I can see once more the austere Catholic chapel at Dartmoor where the altar, glittering strangely neath the flickering light of many candles, stands out in shadowy relief in the semi-gloom. In the lofty and echoing room the preacher, with face upturned is earnestly praying that the great European nations will come to terms, while at his feet the convicts bow low their close-cropped heads, repeating the supplications in a kind of mournful drone, many of them struggling hard to control their emotions.
It was the fateful August of 1914, nearly a year after my second three years’ stretch at Dartmoor had began. The first faint echoes of the political explosion in Europe had drifted to our ears, but the lack of definite news was maddening; the grey, unresponsive prison walls seemed to mock our helplessness. It was terrible to know that while we were there like rats in a trap the great Powers were at the cross-roads of peace and war, and history was being made. Perhaps you have never thought of the war as seen through the eyes of a convict in Dartmoor at the time, and I make bold to say that never before have the dark years which followed 1914 been written up from such a strange point of view.
Prayers for peace were offered daily by convicts and priests in the prison chapel, but at length the news drifted in that Britain and Germany were at grips. The effect on the lags was extraordinary; one and all clamoured to be allowed to do their bit. It proved to me that all men, good or bad, are brothers under the skin when common danger threatens. I thought often of my disabled arm and groaned; it could never be that I might redeem my past for striking a blow for England. Soon the rumour went round that the convicts were to be given a chance to join up and excitement in Dartmoor was intense. But weeks passed and still our hopes were not realised, so the convicts, through the prison Governor, petitioned the Home Secretary for permission to go to the front. But the answer was: “Serve your sentences first.” I shall never forget how I tingled with shame when the news came through. Apparently we were so far outside the pale of decent society that we were not considered fit to take our places by the side of honourable men in the defence of our country. The thought hurt; never at any time did I regret the folly of dishonestly more, I cannot describe my agony of mind when realisation came; it has left its mark upon me to this day.
The war became the one absorbing topic of conversation among the lags, and every scrap of news bearing on it was passed round the prison and snapped up hungrily. We discussed the war at work, in chapel, in fact anywhere that opportunity offered. I remember how two or three of us were waiting in the barber’s shop when an old lag who had been a soldier whispered to me that he wished he was out. “This war is going to last several years,” he added with conviction. Afterwards I a marvelled at the soundness of the prophecy. Prisoners newly arrived at Dartmoor became men of importance to the other lags. We dogged their footsteps and bombarded them with questions. Whatever they said was spread around in prison among the men who craved for news of the conflict. “What do you know?” “How long will it take?” “Is there any chance for us to get out there?” These were the kind of questions the newcomers were asked. There are a few of us who would have not preferred “out there” to the hell of Dartmoor.
Never before had the rule of “no talking among prisoners” been broken so much, and the “tea gardens” – our name for the punishment cells – were always full. But so long as we could hear something about the war we cared not. Scraps of newspapers were smuggled into the prisoners by warders who had made friends with some of the convicts, and were passed from hand to hand until they were tattered and torn. To us they were as diamonds to a covetous woman. The Governor raved at the defiance of the rules. To be caught with a portion of a newspaper meant heavy punishment, and strenuous efforts were made to stop the trafficking. We were constantly being searched without warning. While we were at work special warders searched the cells for newspapers. Often when I was going to work with my party we were halted outside the bath-house, passed in one by one, stripped to the nude, and our clothing searched. The warders even looked in our mouths! The number of pieces of newspapers found was amazing, and at last the authorities gave it up in despair as a bad job.
One day we heard there was a famine in the land, and the warders came round the cells asking convicts to forgo a portion of their rations! The response was eager, for the idea had spread that volunteers would receive a remission of sentence, and might even be released to join up. I was one of the foolish ones, instead of the usual eight ounces of bread I got six, which seemed more like four to the eyes which had become discerning in such matters. And to think the warder who persuaded me to volunteer was a great, stout fellow, of nearly sixteen stones, who solemnly assured me that I was helping to win the war by the sacrifice of two ounces of my bread ration. I was soon disillusioned and with many others clamoured for the return of fill rations. We carried our protest to the Governor and won the day, the two ounces being restored. 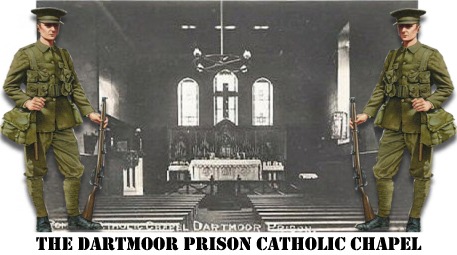 At the time I was being visited by two monks who lived in a monastery near Dartmoor. They told me that they were of German extraction, but added that, as monks they had abandoned their nationality. “We deplore the war as much as anyone else,” they said. “But unless Germany is thrashed severely in the beginning we  fear we must face years of conflict.” These German monks were jolly company, and were received kindly by all the lags. They brought us presents of rosary beads and religious pictures which we highly prized. Some of the convicts retained these trifles for years, taking great care of them, and many have them in their homes today. The convict wore his rosary reverently about his neck, although the same man outside of prison would probably have thrown it down with contempt. Ah yes, Dartmoor turns a man’s thoughts to religion!
I have only known two convicts at Dartmoor to be unanimous in blessing the Governor on one occasion! That was when permission was given for the priest to read some war news to us in chapel on Sunday afternoon. Never was a chapel service looked forward to so eagerly. On Sunday afternoon I counted the minutes to the time when we fled out on to the landing of the chapel. It seemed to me that the service would never finish, and my eyes were forever straying to the clock. A sigh of relief passed around the chapel when the priest began to take off his surplice, for that was a signal for the reading of the war news to begin. The scene was extraordinary, and the memory of it is ever with me. I would have you see with me the rows of convicts on their narrow forms, the strained expression of their faces telling of the intentness with which they followed the words of the ascetic-looking and tantalisingly calm man in the pulpit. When the news of a British victory was read out even prison etiquette – that is what the priest called it – could not prevent the murmur of approval and applause. Convicts, you see, may be murderers, crooks, anything bad, but they are patriots at heart. And many of us had our own at the front; I myself had two brothers who were killed in France. The news of a reverse would make the convicts groan and mutter fiercely to themselves until called to order. Then they would glare meaningly at the warders, as much to say, “Why don’t you go and do your bit?” The warders, to whom the looks conveyed more than words, would look guilty, and squirm in their seats. During the war they suffered terribly from the jaunts and jeers of the convicts, and came to hate one lag who would boast openly that he would soon settle the matter if he had a few thousand convicts behind him. Sometimes the convicts had their moments of great pride in their class. These were when the priest read letters from lags who had joined up and served with distinction, many of them being decorated for courage. It is not surprising that during the war convicts lived for nothing but the Sunday afternoon chapel service. Every Monday the news of the previous day was gone over again by the convicts – in the workshop. the quarries and on the bogs and moors.
There were separate chapels at Dartmoor for Protestants and Catholics, and convicts of the different denominations would exchange the news they had heard in their different chapels. Here is a Monday dialogue:- Catholic convict: “What did you hear?” – Protestant convict: “A British victory at Loos.” – Catholic convict: ” We never heard anything about that!” Then the Protestant convict would describe the news in detail and at the close the Catholic would declare that he “would have to change his religion.” As a matter of fact the Protestants invariably heard more about the war than the Catholics. The Catholic priest was a very slow reader, and as the telling of the war news was limited to certain times, the Catholics had to be content with half the news the Protestants heard. The number of conversions to the Protestant faith at Dartmoor during the war years was remarkable.” – The Sunday Illustrated, April 15th, 1923.

I would imagine the other concerns that these convicts and those in Dartmoor Prison during the Second World War would be; “What if the war was lost?” If Britain became occupied by the enemy what would be the fate of those in prison? Would they be exterminated or spared? If they remained incarcerated what would their treatment be like?