Let There Be Light

“The latter will take the rambler by Yeo Mill, which being near South Hill probably occupies the same site as the one mentioned in a forester’s account of the year 1491, in which is an entry of 6d of new rent of John Will, of Hille, for having a course of water from the water of the Teign, within the Forest of Dartmoor across the land of the Forest aforesaid and venville, to the mill of John at Southill, within the parish of Chagford, to have and occupy the aforesaid watercourse to the aforesaid John, his heirs, and his assigns, according to the custom of the Forest, as appears on the Court Rolls.” – William Crossing, 1990, Crossing’s Guide to Dartmoor, p.258.

According to William Crossing there had been a mill on the site of today’s Yeo Farm since the at least 1941 however other sources suggest the first documented evidence appeared in the Lay Subsidy of 1332. Today the Yeo Farm/Mill is listed as a Grade II building and according to Historic England: “is one of an important and well-preserved group of listed buildings including the farmhouse, office and garden railings, the old school house, smithy, cart shed, and barn.” It should also be noted that up until 1987 the property had been in the possession of the Perryman family for over 400 years.

Bodman states that in all likelihood the first watermill probably dated back to 1854 when Dicker the Chagford wheelwright installed a waterwheel. By 1877 the mill was powered by an overshot wheel measuring 13ft. by 3ft. 4in and was capable at working at six and a half rpm with a flow of 500 cuft. per minute.  The power came from the leat which took water from the South Teign river. Amongst the machinery that was powered by the wheel were two pairs of 4ft millstones, a corn crusher, a threshing machine, a kibbler, a winnower, a lathe, a chaff cutter and a rack saw. Despite the impressive number of functions that were powered they have been since been described by Historic England as: “a ingenious Heath Robinson-looking collection of belt driven machinery.  Interestingly a newspaper report of 1866 noted that John Perryman grew twenty four and a half tonnes of Skirvin swede turnips per acre from unboiled bones only – this may well suggest that he was also milling the bone at the mill. 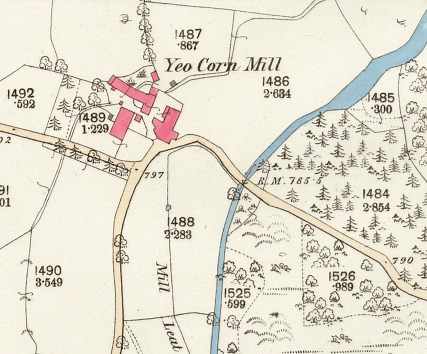 However there is a far more important claim to fame that Yeo farm proudly holds. In the March of 1945 the following appeared in the Western Times: “A farmer at Chagford at Yeo Farm situated at the foot of the hill leading to Kes tor in some of the most secluded and delightful scenery in Devon, and everyone taking a walk any night along the lanes (55 years ago) would be amazed by a strong, bright electric light suspended in the porch of Yeo Farm and if he would call there in the day-time he would be shown a flour-mill, a bone mill, a saw mill, a laundry machine, and even a boot cleaning brushes and an electric dynamo – all run by the power of one water wheel actuated by a leat from the nearby stream.” So there we come to the context of this page because it is said that Yeo Farm  was the first farm and mill in Great Britain to have the availability of electricity. Granted the nearby town of Chagford had a hydro electricity plant that lit a limited number of streets in 1890 but Yeo Farm closely followed in 1893 thus giving it the famous claim of being the first farm and mill. It was the grandfather of Mr. W. J. Perryman who was the man who introduced the electricity provided by what was described as a primitive generator. Such a novelty was this that folk would go on night rambles just view the light hanging in the porch. One cannot help wonder their thoughts on seeing such a spectacle, possibly they would have been one of envy as they returned to their ‘primitive’ form of lighting? Maybe it provided a lighthouse beacon of light of a new era to come? I suppose the modern day equivalent would be something akin to watching with awe the NASA Insight landing on Mars.
In 1921 the power of the waterwheel was boosted by the addition of a turbine manufactures by Gildert Gilkes and Gordon from Kendal. By the time of the Second World War saw milling activity was carried out along with threshing and crushing oats the following year. Amazingly the waterwheel was still generating electricity in 1974.- Bodman, pp.69-70.

As always when researching a subject diversions arise and in this case although on topic these relate to Yeo Farm. In the 1870s William Perryman took on the services of a miller’s apprentice William Ready, a waif from the London slums. During his time at the mill he would accompany Perryman’s every Sunday morning to the Bible Christian Chapel at Chagford the in the evenings he went wit William to the chapel at Throwleigh. Later on he joined the Sunday school there entailing an early three mile hike. It did not take long for people to realise that Ready had a passion and calling for spreading the gospel and he soon began preaching at the Providence Chapel When his apprenticeship was finally over he returned to London for a short spell before returning westwards to Tiverton where he carried on preaching. Throughout the years he became a renown preacher and missionary for the Methodist church and always said he owed it to his time at Yeo Farm.
In the February of 1923 Farm was the subject of a heartbreaking tragedy  when Mrs. Perryman and her daughter went into a nearby field to hang some washing out. When the task was finished Mrs. Perryman noticed that her two and a half year old daughter, Margaret Elizabeth was missing. Immediately she frantically went back to the house to see if her daughter had wandered back there, but there was no sign of her. The field where they were had the mill leat running through and sadly Some three hours later the searchers found the body of the little girl in the upper Teign river. It was thought that the toddler had accidentally fallen into the leat and her because of the force of the water at the time her body was carried downstream into the river. The inquest later returned a verdict of ‘Accidental death from drowning’.
In 1938 the Exeter & Plymouth Gazette reported how three families were made homeless at Yeo Farm. A Miss Harvey, Mr. and Mrs. Harvey along with their child and Mr. and Mrs. Lee were living in a row of three cottages known as ‘Old Wall Cottages’ which were said to date back to the fifteenth century. On the 28th of February 1938, just before midnight Mrs. Harrison was woken by the constant  mewing of her cat and went downstairs to see what the commotion was about. Immediately she smelt an overwhelming smell of smoke and so awoke her husband. He then discovered that at the back of the cottage the thatch was well and truly alight. Whist he tried to extinguish the flames his wife awoke the neighbours living either side of their cottage. 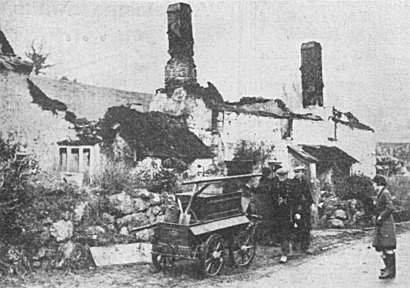 Unfortunately that night a strong wind was blowing across the moor which had the effect of fanning the flames into a much more fierce conflagration. Naturally the Chagford Fire brigade were called and whilst awaiting their arrival some of the neighbours carried on tearing the thatch down from the roof whilst others began removing furniture and valuables. By the time the fire brigade arrived it was obvious that the building were beyond redemption. In charge of the brigade was Captain G. Dicker who stated that the finest of modern appliances would have been unable to put out the fire. As can be seen above the equipment they had was a fifty year old manual pump engine which was delivered to the farm on a lorry.  Relays of fire fighters pumped water from a pool that they had made by damming a nearby brook. Other firemen climbed onto the roof and continued tearing away the thatch but it soon became evident they all were wasting their time. By six o’ clock in the morning all three cottages were reduced to a smouldering heap of ruins and the families left homeless. Fortunately the cottages were insured by Mr. Perryman as he was the owner but the Harvey’s furniture was not covered. Luckily those at the scene managed to salvage much of it before it was destroyed. The next day the Chagford fire brigade once again were called to a mysterious blaze at Treable Farm between Whiddon down and Crockernwell. Once again the old manual pump engine was loaded onto a lorry and rushed to the scene, once again the house was gutted.