“To where the whortleberries lure I hie,
Thinking of tasty whortlberry pie;
A most delightful delicacy, it
To set before the epicure is fit!“

Dartmoor Whortleberries, hurts or ‘urts have a well deserved place in the traditions of the Moor. For centuries they have not only provided a tasty meal but also a valuable income for the folk who went picking them. Today people still go out each summer in search of the ‘Purple Harvest‘ but nothing like the huge numbers as once went out ‘hurt pickin’. Here follows an account of a typical whortleberry picking day as witnessed back in 1924.

“The granite strewn heights of Belstone and the broad bastions of the great hill of Cosdon are just now; like many other parts of Dartmoor, the happy hunting grounds of innumerable whortleberry pickers. In search of comparative wealth (everything is relative, is it not?) these sturdy cottagers are incidentally gaining reserves of health and vigour as they breathe in the pure air. Gleaners of the harvest of wild fruits, they are factors in the supply of the little purple berries so delectable to the palate, when rightly cooked and eaten with the clotted cream from the farms of the breezy frontiers of the moor.
Children of all sizes come along to the fruit picking, for school holidays are wisely ordered to synchronise with the ripening of the ‘urts’ which mean winter warmth and winter clothing for many a cottage in these lean years. It is quite an industry this harvesting of fruits of the earth, to be had without money and without price, just for the picking, and many a pretty girl who rises early and trudges up through beautiful Belstone Cleave from quaint old Sticklepath, or from white-walled, thatch-roofed South Zeal, Throwleigh, or South Tawton may, by strict attention to the business in hand, earn as much as ten shillings between breakfast and supper.
Whole families are to be seen trouping out of incredibly old-fashioned villages on these days of high summer, when visitors to down-along abound; the moorland delicacy is in great demand. From Greater Plymouth sitting by the sea to ancient Exeter closing around and about the venerable cathedral church, Valhalla of great Devon soldiers and sailors; of notable worthies of this and other centuries – comes the cry for the wild fruit of the Dartmoor moorlands.
The women so eminently sensible, too with no frippery to be spoiled by a cloudburst or a sudden moor-mist, with frocks well out of the way of the crystal water courses, bubbling merrily from heaven knows what hidden sources, and racing downwards by self-made gullies or over grey crags and lichened granite, here, there, and everywhere. They go to join the Taw river and swell its volume before it leaves Taw Marsh, the sentinel tors and the wide, heathery moorland for ever.
The children are bright-eyed, clean-limbed and rosy, promising great things for the generation of moor-folk to be. How they revel in freedom from lessons and restraint as they splash careless of shoe-leather, through Taw’s smaller tributaries, jump the bigger ones, help the women with lunch baskets and picking pails, and have a royal time in the open – girls and boys equally exuberant and equally daring.
“Jimmy White, you come along o’ me, my ‘andsome, and don ee go pussivantin off down to the watter,” coaxed a broad-hipped woman as a small boy prepared go downhill with bigger youngsters in an interval of busy picking. “Cart away they ole clitters vore buildin ugly new-fangled houses,” quoth a young seventy year old from Belstone Village, an authority of moorland matters, and on that complex thing, life. An excellent judge of humanity, too, and not to be misled by mere glitter and outward show. “That half gentry stuff down along,” waving an depreciatory hand in the direction of Okehampton, “was havin’ a tell about it some while agone, but they got us Dartmoor commoners up agin ’em, and we wunt ‘ave they old ancient places meddled wi.” “No, that us won’t,” agreed another ancients in tones of finality as the evergreen lit his pipe and puffed at it with supreme enjoyment. “Tes a proper gert pixie-garden this,” declared a Madonna-like woman, nursing her babe as she rested on a broad-mass of granite around which whortleberries prospered amazingly. “Huh, not thik word,” stage-whispered a wrinkled dame. “Call em little people and they’m friendly to ‘ee. Call ’em tother name, and they baint.” There was mild badinage amongst the young folk at this admonition, but their elder, well they just smiled, wise, non-committal smiles, layed low and said nuffin. “Ever seed snakes, or get stung?” asked a tenderfoot, looking at apprehension at a miniature cairn, an ideal lurking place for creepy-crawly things.
“They varmints be about, all right,” said a big schoolboy, “but s’long you dawn’t hurt they you’m be alright. Step on ‘um an he bites o’ course, much same as we,” with an cracular nod.
What colour there was on Steeperton, on Yes Tor, on Belstone, and Cosdon; how the heat haze quivered over the piled granite. What quantities of ripe, luscious fruit were picked there, hot sunshine giving them gracious flavour and lending them the purples and amethysts of the old stained glass in Cathedral windows. Where the giant masses of granite lay thickest there the berries grew most abundantly and where they attained the maximum of size and sweetness. It was notably so where the ground sloped down, facing the south-west to the river, the singing river that seemed in such a hurry to leave the desolation of Taw March, the great company of of tors, the larches, firs, mountain ashes, oaks and copper beeches of Skaigh Woods to foam and race over the big boulders in its headlong plunge downwards. It sang a joyous “vale” to Ivy Tor, the last and least of the rock-covered hills. It sang loudly as it rounded the bend, a final good-bye to the wild places of its birth, going on rejoicingly by lush water-meadows and spinneys until it joined its sister the Torridge at Appledore, going thence to join the sea at Bideford Bay.” – The Western Evening Herald, August 6th, 1924.

Whilst the above account sings of glorious nostalgic sunny days spent picking whortleberries on Dartmoor there were times when the notorious moorland weather was not so kind to the pickers. One early morning in the August of 1922 a woman from Meldon and her two dogs headed for Dinger Tor to pick whortleberries. By that evening she had not returned home  and a thick mist had descended over the moor. A search party of five moormen set out to Dinger Tor by which time the mist had become much denser making it almost impossible to see very far. They searched the whole area for a good two hours when just as they were going to call a halt to the search the sound of dogs baking wafted across the moor. They immediately headed towards the barking and found the woman unconscious under a rock suffering from hypothermia and exhaustion. As the dogs did not recognise any of the men it took a good while for them to let the moormen  anywhere near the woman. Eventually the dogs relented and in the dense mist the party set off back to Meldon but for some reason they too became lost and when the mist eventually cleared early the next morning they found themselves at Okehampton Camp.
As briefly mentioned above; “Ever seed snakes, or get stung?” refers to the adder and it was not unheard of for an unwary hand to venture into a clump of whortleberries to be greeted by the ‘sting’ or bite of an angry viper. In the July of 1912 a soldier from Okehampton camp was on the moor picking whortleberries when suddenly an adder sprang out and bit him on the arm. At the time he didn’t give it much thought and carried on with his harvesting. When later in the day he returned to the camp his arm was so swollen the medics had to cut his sleeve away before he could be treated. The result being that one of his fingers had to be amputated and for a while he was considered to be in a precarious condition.
In later years there was the problem of unexploded ordnance on the military ranges especially the whortleberry spots on the Willsworthy and Merrivale ranges, Doe Tor etc.  A newspaper report from 1929 highlighted said perils;  “In old days at Okehampton, and probably still, one of the difficulties of those responsible for the artillery practice was the clearing of the ranges, not only of ponies but also of tourists and other human wanderers. I remember well one day descrying moving figures among the dummies just as a battery was about to open fire on them. As I turned to order the raising of the danger screen, the old shepherd who was responsible for the clearing of the range shouted excitedly: “Shoot sir, shoot – they be only whortleberry pickers.”
Probably the biggest influencer on the annual whortleberry harvest and its promise of profit was the Dartmoor weather. In years of high rainfall and cold early conditions the harvest would be greatly reduced in both quantity and quality. Many of the local papers would report every season on the condition of the harvest and there were just as many lean years as there was years of abundance. The poor years in some cases would mean a hard and lean winter for some of the moorfolk who relied on the whortleberry income for such necessities as would be required for the long, cold winter months. As the above report suggests it could mean the difference between warm winter clothing and last year’s worn out clothing.
There is a superb photograph of Amy Osbourne picking whortleberries on Dartmoor taken by Douglas St. Ledger-Gordon in 1942 on the Dartmoor Archive website – HERE. As you will see from her clothing she is equipped for most weather Dartmoor can throw at her. Sadly, the link does not work despite copying directly from the page, so below is the photo and if it needs to be removed let me know but hopefully with their kind permission it can stay. 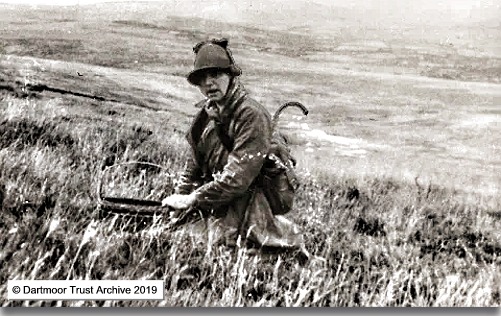