“The Warren House stood before them under a ragged sycamore, it was almost the loneliest inhabited dwelling in Devon. and its squat, white face peered out upon the wilderness from under a black, tar-pitched roof. The rabbit warrens spread on either hand and the dwelling lay in the protection of a tumulus that piled up to the northward… Indeed the spot was somewhat melancholy and calculated to chill a cheerful spirit. Death seemed to have made this place a home.” – Eden Phillpotts, p.32.

By the early 1940s the Waye family left Huntingdon Warren leaving the house and warren deserted. But the house, although in a state of disrepair did not stay empty for long as in 1942 Frederick Symes better known as Mooroaman moved in and used it as a summer house. It was from ‘The Lonestead’ as he called it that he would roam the moors on his many explorations. In 1956 he too finally left the old warren house as being in his eighties he moved back down to civilisation at Buckfastleigh. Once again the dwelling became vacant and in that same year a group of Naval Cadets decided to use the ruin as a shelter. For whatever reason they decided to build a fire in one of the upstairs rooms and were a trifle too ambitious in their attempts as the fire got out of control and virtually burnt the place down. The final chapter in the warren’s history came in 1961 when due to the dangerous state of the warren house it was completely demolished by means of explosives. – Hemery, p.312. I have recieved a message from Kate Cass (July 2020) saying that the warren house was not demolished by means of explosives. She said; “Mr Percy Waye, Thomas Elliot and Dudley Smith (her father) pulled down the building with a Standard Fordson tractor and a wire rope. This building was deemed dangerous but should those who thought it was dangerous have witnessed the walls being pulled down they would have had a different opinion.” So, nice to have history corrected thanks to Kate and sorry Mr. Hemery – you got it wrong!
Mooroaman was not the only person to take up temporary residence at the warren.  In 1909 Keble Martin and some companions began annual summer trips when they would explore the Moor. They built a crude shelter in which they would stay and being men of the cloth it became known as ‘Keble Martin’s Chapel‘ which was located at ‘Mattins Corner’. Today the walls of the shelter are still there along with a stone on which a simple cross had been incised. Being a sanctified place it’s unfortunate that it can be found at Ordnance Survey grid reference SX 666 666. 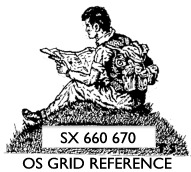