This is probably a very non-PC item to include but it is one that is a Dartmoor tradition and so I offer no apologies for its inclusion. Depending how sharp your eye you may notice a large angular boulder beside the intersection of the track that leads up to the Avon Dam and the old Zeal tor tramway. This boulder is known as the Hunters’ Stone and the actual name of the stone was first penned in a newspaper article which appeared in the Western Morning News on the 24th of August 1904 when talking about the old pound on Zeal Hill he wrote; “It is placed on the brow of the hill above the Hunter’s Stone, which stands by the way leading from the Moor-gate at Shipley to the old quarries above Brent Moor Villa.” This article then later appeared in the publication of Stones of Dartmoor and Their Story’. – p. 26. However, even earlier J. Ll. W. Page notes that the stone existed although not naming it when he wrote; “Between it and Shipley Bridge, we shall have our attention drawn to a large rectangular boulder by the roadside – for we have reached a road now – and upon approaching, observe that it is inscribed. But not to any British chief, ‘Romanized’ or otherwise, but to certain west-country worthies, whose names the eccentricity of a former owner of Brent Moor House has caused to be on the rock.” – p.249. This book was published in 1895 so it would safe to assume that the stone was in-situ prior to that date. Today the stone does not sit at its original location as in 1954 it was repositioned to avoid any damage caused by vehicles travelling to and fro from the Avon Dam construction site. Brewer informs us that at the time the cost of moving the seven hundredweight stone was £23, this being met by the Dartmoor National Park Committee. Also in that year the Dartmoor Hunt were up in arms because somebody who clearly was not a Master of the Hunt had added their initials – CK to the stone.
The stone was cut by the behest of Mr. C. A. Mohun-Harris the one time owner of Brent Moor House. Tim Jenkinson tells that it was a stone mason from South Brent called Billy Knott and his obituary of 1896 stated; “he will be long held in remembrance by the names carved by him of the many Masters of hounds and huntsmen upon the boulders upon Dartmoor.” – p.49. It is interesting to note that this obituary says; “upon the boulders of Dartmoor,” which may suggest that there are other inscriptions somewhere on the Moor. Dave Brewer mentioned that the name Mohun Harris was inscribed on a stone some twenty metres above the moorgate  along Diamond Lane and that he was unable to find it. – p.4.
On it are inscribed the names of Masters of the Dartmoor Foxhounds celebrated in the history of Brent Moor House and various later hunts. On the top face the names; COMMANDER C.H. DAY RH 1919 – 1940, CAREW AND M. F. DOUGLAS PANNANT (the only female whose name appears on the stone) and CORYTON 1888 – 1916 (Mr Carew Coryton appears in many stories like the one of Mrs Brown and her day on the moor). As can be seen from the photograph below the front face bears the name PAUL TREBY. On the right side face can be seen the name TREAWNY MH-DD. Lastly the back face names; BULTEEL, W. L. GOODMAN 1983 -1981 and R. W. F. POOLE 1964 -1967.

What would all these noted huntsmen think of today’s situation? The Hunter’s Stone would probably be hurled at the Houses of Parliament in disgust. 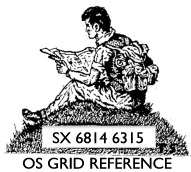