Huccaby Races first took place in the late 1800s and soon became an important fixture in the Dartmoor calendar. Such was the renown of the races that in the June of 1909 Prince George and Princess Mary (the future King George V and Queen Mary) who were on a four day tour of the Duchy attended the event. These were always well attended and efficiently organised affairs with folk coming far and wide for the day’s entertainment. However, on Thursday the 15th of August 1909 an ‘unofficial’ race meeting took place on the tor under the guise of the Hexworthy and Brimpts Races which in comparison to the ‘official’ one provided entertainment of a different kind. Having read the report of the event I can only reproduce it exactly as it was written as to do otherwise would be to lose the hilarious context of the day – it went under the title of ‘Strange Scene on a Dartmoor Tor;

“Huccaby Tor, about five miles from Princetown on the Ashburton road, was yesterday the scene of a race meeting which was obviously not under National Racing Rules. About three or four hundred people belonging to Princetown and its neighbourhood gathered on the summit of the hill, the course being marked out by Union Jacks up and down the sides, and extending to a neighbouring tor. The weather was very fine.
Just before the time for the sport to commence the Ashburton Volunteer Band arrived, and to the strains of a good old rustic tune the company started dancing. Meanwhile, the committee responsible for the conduct of the proceedings retired to affix their badges of officialdom. This being done, there was a general shout for the ponies entered in the first race to be brought up to be measured, which was done on a stone. This caused considerable commotion, for as soon as they were brought in for measurement, cries would go up that such and such a pony was too high, and the rider would be told to “Take mun out o’t.” However five were found to come within the standard and just as these were dispatched to the starting-point, another one was brought in which caused the start to be delayed.
Scenes of this description occurred prior to every race. During the running of the races the spectators became most excited, and their exclamations in the Devonshire vernacular were highly amusing. After the horses had passed the post there was always a dispute as to the actual winner, and as to which was second and third, the committee having to dispatch messengers all over the tor to tell the rider to come in and say how they had finished in order to determine the winners of the prizes. Naturally this caused a lot of disputes.
There were no race cards; no one knew either horse, owner, or jockey; all was chaos. Two horses first past the post were disqualified, Brown Rabbit for going on the wrong side, while Phaeton, who came in first in the Consolidation Race, was disqualified for not having run in a previous race.
Scenes of considerable confusion ensued. The Committee seemed perplexed. For half an hour the crowd, each member of which had decided for himself what was right, surged around the Committee. Eventually, while one local penciller (?) was fighting a navvy, and another one a hedge-trimmer, the whole of the Committee at the advice of a police sergeant, who was the only policeman on the scene, met in an ‘al fresco’ conclave about ten yards away from the crowd, who were forbidden to approach them, and solemnly resolved that the race should go to the second horse. 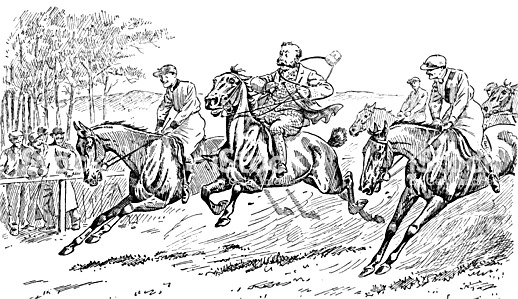 The decision not giving universal satisfaction, it was decided to run an extra race, which was done, but as to which was the winner of this race none seemed to know, nor does it appear likely ever to be known. So much for Hexworthy and Brimpts Races as they were called. When the Plymouthonians left in their char-a-bancs to catch the train at Princetown, dancing was begun afresh by a portion of the crowd, some were enjoying the good old English game of Kiss-in-the-Ring, some were feasting around a pot perched on burning twigs, while others were carousing in the refreshment tent.” – The Western Evening Herald, Friday 16th of August, 1901.

This was not the first Hexworthy and Brimpts Race event as sometime in the late 1890s a Mr King and some other gentlemen who were staying at Brimpts suggested that with a view to encouraging sports amongst the local inhabitants and improving the breed of the Dartmoor Pony a race meeting should be organised. A committee was formed with various local farmers, inn keepers and gentlemen and the races took place in the September of 1896. There were five races on the cards for the day; The Duke of Cornwall Stakes, The Bristol Anglers Stakes, The Brimpt’s Tally Ho! Stakes, The Huccaby and Hexworthy Stakes and The Bellever Flyaway Stakes.  Following the races various athletic races and sports were held in which local ‘athletes’ took part and the Ashburton Band provided music for dancing on the Green. As an inaugural meeting it was deemed a success.
Now, whether the disastrous meeting was an unofficial one to the main event is the question. In 1902 the Hexworthy and Brimpts Races were advertised as taking place on the 1st of September so they did carry on. Maybe, it was a new organising committee in 1901 who got things slightly wrong?