Home / Dartmoor Explorations / Holne and Back

Take a winter’s day back in 1877 and a good round ramble from Holne and here you have a very evocative narrative of that trek.
“A four miles’ drive from Buckfastleigh takes us to that most comfortable of hostelries ‘The Church House’ at Holne. Our coming had been duly notified and though ’tis late at night we are made thoroughly comfortable and at home. Next morning after a breakfast which left nothing to be desired, at about 10 o’clock, we start. The morning is bright and clear, and dazzling, dangerously brilliant, indeed for December, with a long day in front, but making the views, the hills, the streams, and the tors stand out in their sombre colours most beautifully. We leave the village by the road known as the Princetown Road (and which, by the way, is marked in the Ordnance Map as a broad one leading to that place, direct post, Swincombe, and via Tor Royal, but which the unwary traveller will find singularly trying to his carriage springs should he be unwise enough to attempt to drive that way). To continue, we leave Holne by this road, and after walking some 150 yards come to a junction. Here stands a post – very destitute of information, it is true, but retaining, even at the present time, sufficient of its pristine glory to indicate that the road on your left-hand is the one to Princetown. Half-a-mile along it note a narrow turning on your right; this leads into fields through which we go, and passing Stock Farm and North Stock Farm (Fore, Middle, Seale’s, West Stoke) by a series of gates, fields, and stiles, pointing almost directly to Benjy Tor (Bench Tor), to reach the open moorland. It is true, almost the same result might be arrived at by following the along the road until the open ground is reached and where the hedges no longer hem the road, striking due north for Benjy Tor, which stands out very prominently, and therefore cannot easily be mistaken; but we avoid hedges and flee from roads whenever there’s a chance. Just as we gain the open moor, a storm cloud bursts; ’tis a fierce one and so sweeping that a friendly rock almost shelters us from its effects. In ten minutes it is over, and the sun bursts out in all its vigour just as we reach the point of Benjy Tor. What a glorious view! The Dart rushing furiously along its rocky bed through the deep gorge that the tossings of countless ages have worn, is alone a picture; but when looking downstream, you have the matchless valley of Holne Chase, Buckland Woods, with the high Buckland Beacon and the wonderful tints – the bright green holly,the dark fir, and the old fashioned gold tint of the oak and bracken – all like a picture, varnished with the shower (to use an expression of Mr. Widgery, the artist), it is impossible to give by words any idea of its beauties. Looking upstream, too, and catching the Princetown Prison in the distance, you have such a prospect that, did it exist abroad, would have its charms described most accurately in Baedicker and the other tourist books; but lying in Devonshire and in our own country, it is comparatively unknown.
It takes a long time to thoroughly take in the view and enjoy it from its numerous points of vantage, but out day’s journey is before us. Although reluctantly leaving the beautiful spot, we continue along the side of the Dart, going upstream, cross a brook coming from the Moor (Venford Brook?), and, leaving an old mine on our left (Wheal Cumston?), straight up over the hill across another stream (Aller Brook?) for Cumston Rocks (Combestone Tor), which appear distinctly in front of us. Here, too, you get most charming views, more moor-like, perhaps, than from Benjy Tor, but still beautiful. The rocks do not differ materially from those on many of the Dartmoor Tors, but on one of them is the distinct appearance of a rock basin in the process of formation. From this point, looking west, which is up stream, and in the direction of Princetown, we noticed a very curious enclosure some 100 feet in diameter, in shape of a perfect circle, the internal portion divided by a series of fences converging to the centre. An inquiry from a native gives us only the information that its name is Cold East Field, (Possibly the enclosures on the 1840 tithe map listed as ‘Five Plots at OS grid ref. SX 6586 7203?) and that it was not used in any way as a pound, but not the reason for its shape nor the date of its being taken in, beyond the fact that “’twas long before his time.” A mile’s walk soon takes us to a junction of trackways; take the turning down over the hill, and in a minute you are at the Forest Inn, Hexworthy – a small inn, curiously built on the side of the hill, and one in which the “cider tap” is proverbially good. 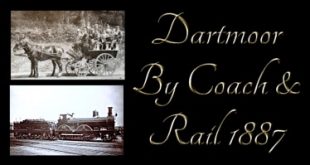 By Coach and Rail