Today we have ‘mugging’ and ‘carjacking’ just over one hundred years ago both were classified as ‘highway robbery’. Today the thieves are after mobile phones, credit cards, cars etc. then they were robbing watches, cash, horses etc. Such villains thrived on and around the lonely highways and byways of Dartmoor from around 1600s to the early 1900s. Most of these crimes were committed by ‘footpads’ who plied their trade on foot as opposed to horseback.  The general modus operandi was on dark nights to lay in wait in the road sides or hedgerows until their victims passed when they would leap out of hiding. If the traveller was on horseback they would grab the horse and dismount the rider, if on foot they would simply attack the wayfarer. Either way in many cases a viscous assault followed with the intent on rendering the person senseless and then robbing them. On some unfortunate occasions the victims was assaulted so badly that they died from their injuries. Dartmoor and its surrounds provided the ideal place for highway robberies, remote dark roads and lanes, sparsely populated with minimal police protection. There definitely was what was described as the ‘season’ for highway robbery that being late autumn through the winter time due to the early dark nights. Being an agricultural district there were several livestock markets which often meant farmers returning from selling their livestock had money on them and therefore prime targets. Additionally the roads and lanes were often used by tradesmen returning from a day’s business, again in all probability carry cash. It cannot be argued that in the early days the punishments for highway robbery were harsh, at best long terms of transportation at worse death by hanging. Looking back through old local newspapers every week the names of those due to or having been hanged filled their pages. By the 1840s most criminals convicted of highway robbery were transported and it was only where the robbery was particularly viscous or death occurred that the sentence of execution followed.
Highway robbery was not just the domain of males as several cases also involved women – they too felt the heavy hand of the law when caught. Such was the concern regarding the high number of robberies that in some cases local farmers etc formed their own protection force in the form of organised and armed nighttime patrols.  But who were these villains? During early postwar times they were ex-soldiers and sailors who having returned from the conflicts could either find no work or simply wanted an easier way of making money. Maybe they were people in dire circumstances who robbed out of necessity and there were the ones who were just out and out villains. It is remarkably noticeable when looking back through local newspaper reports of highway robbery how up until the mid 1800s they gave details of the actual robberies but later concentrated more on reporting about the trials and sentences of those who committed such crimes. Was this a determined effort to play down the large numbers of highway robberies that were taking place and restore public confidence?
What led to the eventual decline in highway robbery? One factor was the introduction of bank cheques which meant people carried less actual money. In later years the introduction of motorised vehicles meant they were much harder to stop than a horse. Also improved policing methods had some effect both in numbers, mobility and methods of communication.
Below are just a very few examples of incidents of highway robbery that occurred in and around Dartmoor if the whole county of Devon were to be included it would take an entire book to document them all. 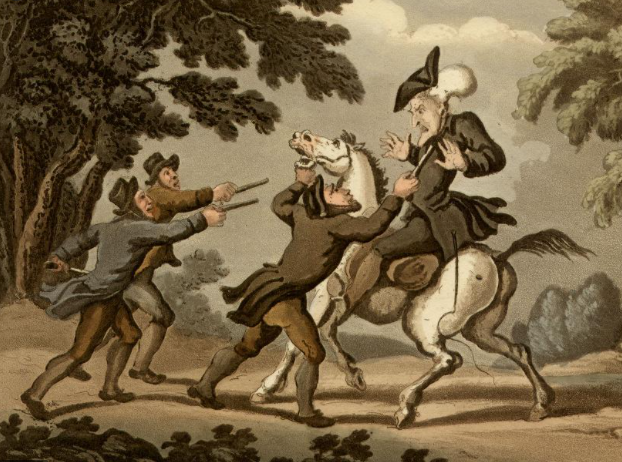 Some infamous characters found  their way into Dartmoor folklore such as Captain Jack. He was a notorious highway man who preyed on travellers going from Okehampton to Tavistock. Legend has it that he was eventually caught and sentenced to death by hanging and his corpse placed in the iron cage which once stood on Gibbet Hill. Finally, if you thought highway robbery was a thing of the past then you would be wrong. In recent years there have been at least two cases of people being actually robbed on the roads of Dartmoor. It could also be said that a modern form of highway robbery is that of the numerous cars that get broken into when left in the various car parks around the moor.