History is full of sad and tragic stories of service girls who fell victim to feckless lovers and the pages of Dartmoor’s past are no exception. For instance take Kitty Jay whose forlorn grave is testament to such events. But one does not have to turn the pages back too far to find another example of a housemaid who was forced into tragic circumstances due to an unwanted pregnancy.

In 1913 Thornworthy was a grand  country estate which nestled on the eastern slopes between Thornworthy Down and the South Teign River. It was owned at the time by the eminent Hawkins Blake Varwell J. P. Like most establishments of its kind a full complement of staff found employment there.; cook, parlour maid, housemaid, etc. On September 11th 1913 P. C. Broad from Chagford was summonsed to the house on what was to prove a sad and macabre discovery. On entering one of the servants bedrooms he noticed a blood stained bed sheet and blanket on top of which lay a blood stained nightdress. On closer inspection he saw the nightdress bore the name  E. Keates, the housemaid at Thornworthy, he then examined a nearby tin trunk and on opening that, he came across a small parcel neatly tied up with cord. On opening the package he then saw, much to his horror, the dead body of a newly born baby girl wrapped in a linen pillow case. Further enquiries revealed that the bedroom belonged to Emma Keates, the housemaid who has left Thornworthy on the 1st of September to go on holiday. He then took possession of the tin trunk and its pathetic contents and reported the matter to the Coroner.
On that same evening Mr. Brown, the Coroner for the District held his inquest at Thornworthy House. A Mr. A. H. Jeffery was foreman of the jury and Superintendent Cary observed the case on behalf of the police.  P. C. Broad was the first witness who described how he had received information of the case and went to the house where he found the tin trunk and its contents along with the blood stained items.
Emma Gay, the cook was the next witness who stated that on the morning of the 29th of August she called Emma Keates at 6.30 a.m. to begin her work. When Emma appeared the cook said to her; “You are looking bad,” to which the girl replied; “I have had a bad bilious attack.” The girl then had a cup of tea and went about her daily chores as normal and on the 1st of September she left Thornworthy to go on her fortnight’s leave to her aunt’s house at Kingsbridge. After Emma Keates had left the parlour maid, Ester Green went into Keates’ room and noticed a foul odour and so called the cook who then went into the room and noticed the blood stained items. Immediately she informed her employers who came to the room and together they opened the tin trunk and found the little parcel. On partially opening this they saw what appeared to be the leg of an infant and so called for P. C. Broad.
Dr. Brydon then presented the findings of his post-mortem at stated that the body was that of a fully developed female child in an advanced state of purification but he could not say for sure whether it had been born alive or still-born.
The last witness was Emma Keates herself who having been brought from Kingsbridge stated that she was 23 years of age  and that she was the mother of the deceased infant. She the added that when the baby was born she could not hear it cry or see any signs of life. As one can imagine, being a young girl, alone, possibly ashamed of giving birth out of wedlock and the possible repercussions she was in a state of panic.
After deliberation the jury returned the verdict; “that the child was still-born.” It was also stated that; “the accused, who has been in her present situation for eighteen months, has borne a good character, and has been looked upon as a trustworthy servant.” Nevertheless Emma Keates was placed under arrest and was charged with endeavouring to conceal the birth of her female child and was remanded to appear before the Moretonhampstead Police Court. 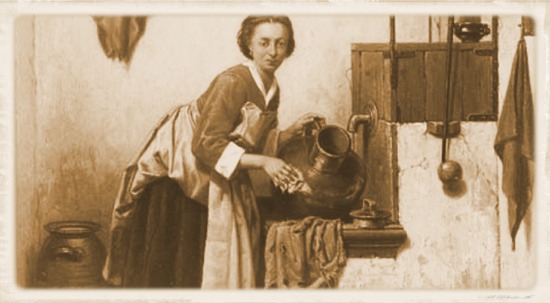 At the Moretonhampstead Police Court all the previous witnesses repeated their evidence but with some additional facts stated by P. C. Bubear of Kingsbridge. He noted that on the 11th of September, having received a telegram form the coroner he went to the address where Keates was staying. He informed her that she was required to attend the initial inquest at Thornworthy. She then asked; “what do you think they will do to me sergeant?” Bubear then replied; “what do you mean?” to which her answer was; “about my child.” She was then cautioned and asked if she had recently been confined? To which she admitted; “Yes, about a fortnight ago.” The P. C. then asked to the whereabouts of the child, Keates replied; “In my box at Thornworthy House, Chagford.” Having heard the evidence Mr. Hayter-Hames asked the accused if she had anything to say, in response she simply remarked that; “I own to everything that has been declared in this court. I can only give the same evidence as I gave on Saturday night.” The Bench committed Emma Keates to appear at the next Devon Assizes. Bail was set for £10 and a surety of £10 for which her aunt stood surety.
In the 30th of October of 1913 Emma Keates appeared at the Devon Assizes at Exeter charged with ‘concealing the birth of her child’, to which once again she pleaded guilty. Once more the doctor’s findings of the post-mortem were heard insomuch as ; “the child had breathed but it was not possible to say if it had had a separate existence.” Also present at the hearing was Mr. Scamell who was the Police Court Missionary (in short, the forerunners to probation officers/social workers who ran the homes of refuge), for Exeter who suggested that Emma be admitted to the Exeter ‘Home of Refuge.” The final verdict of the Bench was that she be discharged on the condition she went to reside at the Home of Refuge.
The ‘Offences Against the Person Act’ of 1861 states that; “If any Woman shall be delivered of a Child, every Person who shall, by any secret Disposition of the dead Body of the said Child, whether such Child died before, at, or after its Birth, endeavour to conceal the Birth thereof, shall be guilty of a Misdemeanour, and being convicted thereof shall be liable, at the Discretion of the Court, to be imprisoned for any Term not exceeding Two Years, with or without Hard Labour.” In the 1948 Criminal Justice Act the words; “with or without Hard Labour,” were repealed. Today in such cases the police and/or the social services become involved and should it be proven that the infant was deliberately killed then that is regarded as murder and can carry a sentence of life in imprisonment with a minimum of twenty years. So one could say that in Emma Keates’ case she received some degree of leniency if you could call the tragic situation and subsequent admission to a Home of Refuge lenient? I can find no information as to who the actual father of the child was or what happened to Emma after the trial, hopefully she went on to lead a happy and productive life.