Whilst trawling through some old publications in the hope of coming across some mention of a topic I’m researching I came across a brief and totally unrelated piece which has now sidetracked me. It was written in 1902 and referred to an ancient cross that somebody had discovered which, like many of Dartmoor’s old crosses, was serving as a gate post. On checking my ‘Pilgrimage to Dartmoor Crosses’ book there was no mention of it – clearly a lack of research on my behalf. So further investigation was needed – hence this web page. 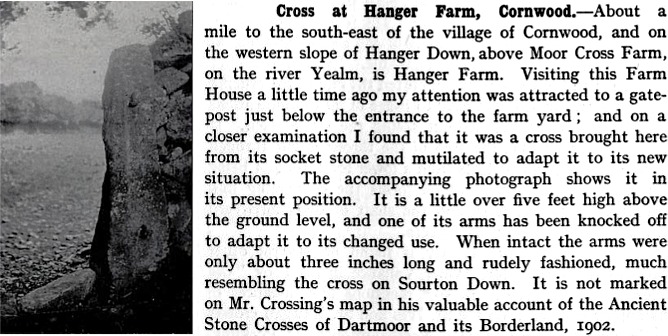 Firstly but not specifically related was the origin of the place-name – Hanger. There is Hanger Down, Hanger Down Clump, Hanger Farm and Hanger down Cottages, presumably all originating from Hanger Down. The English Place-Name Society were of very little help apart from giving one word –Hangra so the next port of call was the Concise Anglo Saxon Dictionary which stated that the word meant ‘wooded slope’ which makes sense. So, taking the two elements of the name -Hanger = Hangra = wooded slope and Down = Dun = hill/down you arrive at the ‘Hill/Down of/with the wooded slope’ and over time the word Hangra has mutated to Hanger. This then brings up another question, if you look on any map you will see that Hanger Down Clump is a round clump of trees. Some have suggested that these are the vestiges of the ‘wooded slope’ but that would make them over a thousand years old. As I have said, nothing to do with the cross but a bit of fun.
Back to the cross, as correctly stated there is no mention of the cross in William Crossing’s ‘The Ancient Stone Crosses of Dartmoor’ so onto Starkey’s ‘Dartmoor Crosses’ book. He gives a brief mention saying that: “Another mutilated and only part completed cross is in service as agate post at Hanger Farm near Cornwood.” He does also comments that it along with other crosses in the area would have marked trans-moor tracks connecting Cornwood and other villages to Tavistock and other parts of the Western Moor. p.53. However if this was the case and the cross was never completed was merely the intention there had it been finished?
Bill Harrison in his publication – ‘Dartmoor Stone Crosses’ also agrees that this cross was ‘work in progress’ that for whatever reason was never completed. He states; “One face and one side only have been worked, the back is still in its original state and it seems that the mason was on to a loser from the start for there is not sufficient material to cut away to form the second arm.” – p.137. That description reminds me of the part finished cross that has been built into an enclosure wall near Laughter Tor. 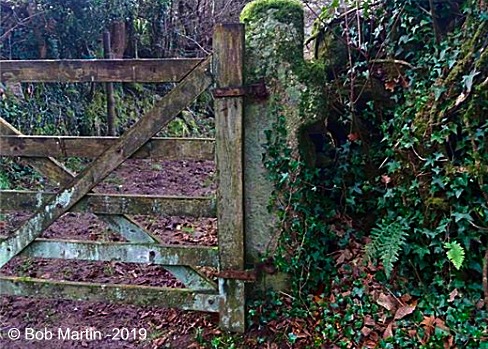 The last port of call is the Pastscape Record website who basically state all of the above and ends with a Field Investigators comments from 1950 – “this is clearly a stone cross which was unfinished and abandoned in process of manufacture at SX 6130 5870. It is interesting to compare the old photograph and the one Bob Martin took in 2017 where basically nothing has changed apart from the fact that in the original the gate hangers are visible but no gate. Additionally, is it me, but when comparing the two backgrounds on each photo the original shot appears to be in a completely different location?