Visiting Dartmoor’s noted landmarks for the first time is always an exciting experience and something that lodges pleasant thoughts in the library of the mind. I can remember such thing when I first went up to the Grey Wethers stone circles. I have stumbled across this similar visit paid to the sacred circles seventy seven years ago by Arthur Wilde. What is interesting when reading such accounts is that in your mind you can follow in every footstep and picture the walk landscape feature by landscape feature. It is also fascinating to read about features and traditions encountered then that have long gone, never to be seen again. If you never have experienced any of these walks then it can be fun to follow the old routes on an Ordnance survey map. 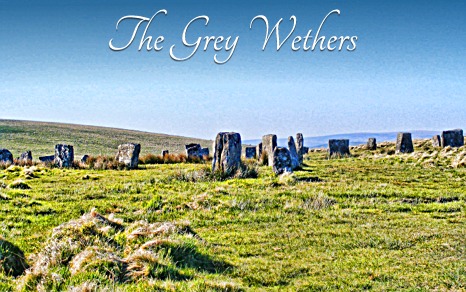 Leaving Teignhead farm, we made our way to a gate which we could see on the top of an incline near Sittaford tor, and on arriving there we were delighted to see The Grey Wethers in front of us. Entering that gate, with those ancient stone circles in such a lovely spot, gave me the feeling that I was on the threshold of a sacred place. Indeed, my first reaction to the surroundings was to doff my hat in reverence. I have not been in Devon long enough to study closely these old moorland monuments in order to get a fair understanding of them; whether or not the Druids or some other Order worshipped at The Grey Wethers there is certainly something about the environment that struck me as being profoundly sacred. There are two circles, quite adjacent, and each according to my pacing, is approximately one hundred feet in diameter. One circle is now complete with twenty-nine upright stones, but the other has only twenty. In an oft quoted line, Shakespeare refers to sermons in stones, and I feel that The Grey Wethers are eloquent sermons in themselves. They appear as if they were trying to tell me something of their age-long story, and handing on a message of faith of long, long ago.
They made a noble picture on that sunny evening, but I felt I would like to visit them on a frosty night, with a full moon. The only song of two or three skylarks filled the air with their gorgeous music, and I like to think that those who worshipped or held their counsels here in the dim past also heard the same lovely song of praise. I hear that these stones are so named by reason of their resemblance to a flock of sheep when viewed from a distance (see the Legend of the Grey Wethers); but on looking around occasionally this impression was not conveyed to me, mainly because, I think, of the regularity of the stones now that they have been restored to their original positions. The grey Wethers will always be one of my most abiding memories of this very historic county.
A grand tramp over White Hill with majestic Bellever Tor in front of us brought us to the foot of Merripit; and then on to a celebrated hostelry near by for refreshment and rest before our walk back to Moretonhampstead.” – Arthur Wilde, The Western Times, July 17th, 1942.
Assuming these pilgrims arrived at Chagford by some means of transport and as there is no mention of how they got back to Moretonhampstead let’s also assume they walked this would make for around a sixteen mile walk. Certainly today I would suggest that the preferred route would be from Fernworthy, through the plantation and up to Sittaford Tor. It is also worth noting that should you ever visit the Grey Wethers then there is now another recently discovered stone circle nearby – Sittaford Stone circle.