“They sat in a nook of Great Links Tor, looked at the world outspread beneath them, and listened to the hiss of the wind, as it flogged heath and stone and chattering rushes. A million tiny clouds dappled the sky with pure pearl, and far beneath this apparently motionless cloth of silver was woven another cloud-pattern of darker tone, where tattered vapour fled easterly across heaven before the roaring breeze. This rack sank to earth’s surface, swept the Moor, and, when it reached the crowns of the land, swallowed them.”, Phillpotts, p.84.

As you may gather from Eden Phillpotts’ description of the landscape around Great Links Tor it can be a desolate spot when Dartmoor decides to cloak itself in infamous mists. On the other hand when Dartmoor is in a good mood it can afford wide-ranging panoramic vistas which gladden the heart. I have had the pleasure of both conditions on various visits, both of which provide contrasting visitor experiences. But believe me when the mists do descend the best option is to bear due south from the tor until you meet the track which leads back down to High Down Ford. If you get this right you will see the welcomed sight of what appears to be a small man looming out of the mist, this is the Dick’s Well boundstone who sits close to the track so all’s well at Dick’s Well.

Over the centuries the craggy tor has overseen many of man’s ventures which have involved tearing out its very substance at the nearby peat works and  mining out its precious ores from its valley streams. All have left scars and painful reminders of Dartmoor’s industrial past across the landscape. Once again Eden Phillpotts captures this scene; ” he breasted the eastern shoulder of Great Links and then stood a moment, startled by the strangeness of the scene before him. This field of industry had already passed into the catalogue of man’s failures upon Dartmoor, and a ruin marked the spot. Round about, as though torn by giant ploughs, the shaggy slope of the hill was seamed and ripped with long lines of darkness. A broken wall or two rose here and there, and radiating amid the desolation of bog and mire, old tramways ran red.”, p.16.

There have been many suggestions as to how the tor  acquired its name, one old form was Great Lynx Tor which could be suggestive of the fact that at one time it was the realm of the long lost Lynx. Then you have the modern name ‘Great Links Tor’ which has nothing to do with golf, one suggestion is that the name derives from the old Celtic word lenneck meaning ‘marshy’. As far as the wet ground which lies at the tor’s feet this is most appropriate. Page recounts how, during a very wet spell, the whole of the Lamerton fox hunt became ‘stugged’ in the mire, p.106. Another name that thanks to William Crossing and the letterboxing community has attached itself to the tor is ‘The Castle’. The basis of which are these words; “Though its form is not so suggestive of a ruined castle as is that of Hey Tor, when viewed from certain points, such a resemblance is not altogether wanting.”, p.180.

A quick look at the old map below will show that the early Ordnance Survey surveyors certainly were busy on Great Links Tor, there are at least four bench marks dotted on and around the tor. Also there is a trig pillar located on the tor which records a height of 586.740 metres, for those who are into Trig Pointing its flush bracket number is S3451. When the surveyors were taking their trigonometrical survey between 1800 and 1809 Great Links Tor was triangulated with Cut Hill and at the time what was listed as Tes Tor, did they mean Yes Tor? As actual Dartmoor tors go Great Links Tor is the second highest at 586 metres, the highest being Yes Tor at 619 metres. With regards to highest points on Dartmoor then it comes in sixth with High Willhays coming first at 621 metres.

Next we come to ‘Hill Bagging’, Great Links Tor is  hill number 3645 and is classified as both a ‘Hump’ and a ‘Dewey’ which means it has a drop of at least 100 metres and a height range of between 500 and 609 metres. For rock climbers then Great Links Tor has 15 rock climbing routes  and is described as one of Dartmoor’s remote venues. It is worth pointing out that great care should be taken when climbing on this tor especially in wet and windy weather. As far back as the 1800s this advice was being given; “The rocks of Great Links Tor lie in barrel-like piles, the loftiest attaining a height of about fifty feet. None but the young and active man should attempt to scale them as they are dangerous; in fact, it was not until a second or third visit, and with some abrasion of clothes if not skin, that I accomplished the feat.”, Page, p.107. Just below the tor sits a granite sentinel which was a boundstone marking the limits of the Rattlebrook Peat Works.

Great Links Tor is also a point through which the St. Michael Line passes through, starting at St. Michael’s Mount in Cornwall the line transects England and finishes at abbey in Bury St. Edmunds in Suffolk. From Great Links Tor the previous south westerly point is the Cheesewring on Bodmin Moor and the following north north-easterly point is Cosdon Hill. Several Dartmoor writers have commented that they felt uneasy when visiting  Great Links Tor. Ruth St. Ledger Gordon remarked; “Up there with my husband one day, we were, almost without warning, suddenly enveloped in a typical Dartmoor mist. Thick, opaque and suddenly obliterating, it created a curious sense of other-worldliness, an isolation in time, and a severance from all normal contacts. Fear lurked in the mist wraiths, and had one been alone might have leapt out and taken control.”, p. 126. There are those who will say that the strange sensations experienced on the tor are connected with the earth energies that supposedly run along the St. Michael Line? 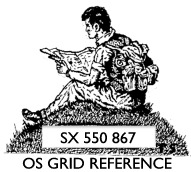