“Fore street was full of country-folk. Christmas had been very wet, and the first Saturday after the festival, or within the octave as Church people would say, was fine and bright. Whiskered men, buxom dames, and strapping wenches with cheeks like nectarines or wooden dolls had come from all parts of mid Devon to celebrate the ‘giglet.’ The heads of families spent most of the holiday in the public houses. For most of them the fair day began and ended with beer. The stout dames met others equally well proportioned. They stood together upon the road laughing consumably. The most ordinary remark upon the weather was sufficient excuse for a flood of mirth. As for the daughters, they stood like well-filled sacks, their arms hanging stiffly as though bereft of elbow joints, smiling stupidly at every young man who passed.” – John Trevena, Arminel of the West, 1909, p.36.

The above short account describes the Okehampton Giglet Fair which was one of several such fairs held in Devonshire. In the case of Okehampton it was normally held on the first Saturday after Christmas although at no time had it ever been chartered. But how did the name come about? The word ‘giglet’ or ‘giglot’ was used to describe a giddy or wanton woman and as will be seen later the reason for its name. The main purpose of the fair was for the young men and women to find new employers or in other words a ‘hiring fair’ although for many it was also a social event with ‘all the fun of the fair’. This meant numerous stalls and barrows selling trinkets, fairings and other goods plus the usual gathering of tricksters and swindlers. In 1866 the Western Times reported that;  “the prigs reaped a rich harvest, on giglet market day. All that amounts to is that a few country lads were duped out of certain shillings by the card sharpers. It is a great pity that an active officer in plain clothes was not stationed here on that day, as there were a few very interesting characters he might have nabbed.”

There can be no question that the giglet fair was for many eagerly awaited once Christmas was out of the way and hoards of people would flock to Okehampton for the event. In 1894 the Exeter & Plymouth Gazette reported that; “The annual ‘Giglets’ market was held at Okehampton on Saturday. Not much in the way of general business transpired, but the day was observed as a holiday by the young country people who came into town in hundreds to get a ‘giglet;’ in fact, the day may be considered as a pleasure fair, and had all its frequenters, such as sweet ‘standings, cheap-jacks, shooting stalls &c. The chief attraction of the day was the Edison phonograph, which was largely patronised, and caused much astonishment among its patrons. A goodly number of ‘giglets’ came in on Saturday and paraded the streets during the day, the weather being all that could be desired. The ‘giglets’ cleared off early and the day’s enjoyment terminated quietly.”

It is from the above account one can begin to see the relevance of the so-called giddy women and their association with the fair. There have been some suggestions that one custom of the fair was that a young man could claim as kiss from any girl who took his fancy without fear of retribution. Additionally it was said that the young men could visit the local inns and taverns and drink beer to their heart’s content smug in the knowledge that their employers would be picking up the tab. What is certain is that it was perfectly acceptable for a young man or woman to introduce themselves to any prospective partner without seeming wanton or forward. At any other time of the year this would have been considered a huge no-no and most improper. In 1832, J. Britton wrote the following of Okehampton’s Giglet Fair; “On the Saturday before Christmas a great cattle market is held here; and on the Saturday after Christmas, is a great holiday fair, called a ‘Giglet’ or ‘Giglet Market;’ that is a wife-market, at which the most rustic swain, if weary of bachelor-ship, is privilege with self introduction to any disengaged fair one who may attract his particular fancy.” The young lads would wear some mistletoe in their caps which signified that they were on the search for a giglet and it soon became evident who were the more attractive giglets by the size of their admiring posses as they moved from inn to inn. Needless to say that over the years a mixture of alcohol and excitement led to some ‘giglets’ being given a reminder of the event nine months later.

In 1877 the Western Times reported that; “The Giglets Market, an annual event, was held on Saturday, but the weather was very stormy and greatly marred the enjoyment of the pleasure seekers. The giglets presented a very draggle-tailed appearance. The weather slightly cleared late in the afternoon, and then the few stalls in the streets did a brisk trade. The tricksters who ‘do’ the dupes were present and had a good opportunity of displaying their art, and at the same time easing the pockets of the rustics of sundry half-crowns. In the evening there was dancing at the London Hotel, and everything passed off without disturbance. Old people say that the giglets market is not now what it was when they were young, when it was a common thing to see the Fore Street lined with shows and crowded with people from the country. The holiday makers now avail themselves of the cheap railway excursions and enjoy themselves more rationally that in the days gone by. There is a feeling of regret at seeing old customs die out, but it is evident that giglets market, in a few years will become a thing of the past.” How prophetic those last words were to become as later reports would demonstrate as the years marched ever onwards. In 1916 the Western Times noted that; “Okehampton ‘Giglet’ market was held on Saturday, but there was not a large attendance. Years ago this was a most important event, especially amongst young people. On Giglet Market day young men and young women used to come in from the country in large numbers. The young men would select a giglet on that day, and the town used to be alive with young men walking out with their ladies. The streets used to be lined with stalls and the old folk who reside at Okehampton tell of how the streets used to be packed and it was a red letter day for the young of the district. On Saturday things were quiet different; just a few could be seen arming their giglets. Throughout the day the wind was very high and hats were blown in all directions. Although it was a great market there was not a large number present.” Was this a case of the bad weather detracting from people attending or another factor? Eight years later, in 1924, a similar report in the Western Morning News pointed to some probable cause as the the decline in the popularity of the fair; “Okehampton giglet market was held on Saturday in a storm of wind and rain and there was a very small attendance. All the old customs have one by one departed, and now no ‘standings’ for ‘fairing’ in the streets… Fifty years ago it was one of the largest attended pleasure fairs in the district, but motor-cars, Bank holidays, outings, and the great change in Devonshire rural life have altered everything…” The last newspaper report of Okehampton’s Giglet Fair appeared in the Yorkshire Evening Post of 1952 when the Town Clerk commented that; “the fair today is little more than an ordinary cattle market. Agricultural workers have so many other attractions – cinemas, buses to the big towns, shows, pantos, the wireless and TV. And, of course, the old idea of hiring workers for the year has quite died out.” So basically, as with many things, the march of time and progress had overtaken the attraction of the giglet fair and replaced it with other modern attractions. For a more poetic account of Okehampton Giglet Fair there is a poem written in 1865 which can be read – HERE. 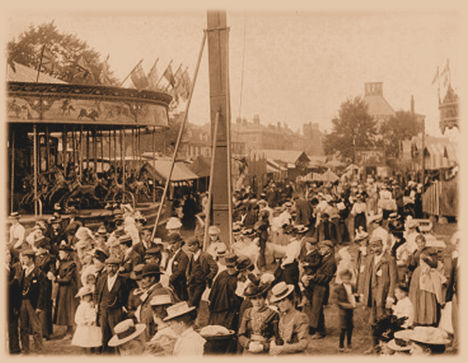 In much earlier times along with the normal plethora of things that could be purchased at the giglet fair was that of a wife. Tradition has it that if a man purchased a wife at such a fair and then led her all the way to his house by a halter then they were deemed to officially be man and wife. The one stipulation was that at no point was the halter to be removed until the couple had reached their final destination. Baring Gould relates how one of his parishioners, Henry Frise went to Okehampton Fair, possibly the giglet fair where he purchased a wife for half a crown. He then, as custom demanded, led her the twelve miles back to his house by a halter hanging around her neck. Word soon spread and by the time the couple had reached his house the whole village had turned out to see his new bride to be. It did not take long for the local squire and vicar to intercede on the matter and point out the fact that in nobodies eyes were they considered to be married. However, in Frise’s eyes he was having none of it, as far as he was concerned he had paid for the woman, led her all the way home with a halter around her neck and that at no point was it taken off until they had crossed his threshold and shut the door. Once again the squire and vicar tried to convince the man that what he had done was both immoral and more to the point illegal. Frise supposedly replied; “I don’t care, hers my wife as sure as if we was spliced at the altar, for and because I paid half a crown, and never took off the halter till her was in my house. lor’ bless yer honours, you may ask anyone if that ain’t marriage, good sound and Christian and everyone will tell you ’tis.”